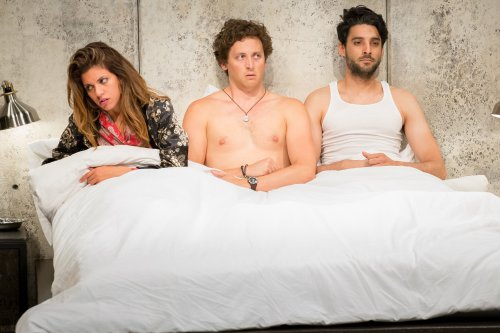 An Egyptian-American couple has invited Doug, a photographer/book designer, to join them for an evening of sexual fun. Unknown to Doug, this is an experiment for Leila, the author of an as-yet-unpublished memoir about how Arab and Muslim women are treated in the Middle East based on her unfortunate experiences returning to Egypt during its Arab Spring. For Leila, men take freedoms that they don’t allow women. She wants – or thinks she wants – to act on her desires for a change, while she broods over the exploitation of women in a male dominated society. Her boyfriend Rashid, an Egyptian photographer born in the U.S., has grudgingly agreed to go along with the evening as payback for his poor behavior when she told him of an incident that happened to her on their trip. For reasons yet unrevealed, she has not allowed him to read the completed manuscript yet, for fear that he will react badly yet again.

The author plays with our expectations with the seemingly racy title. While Leila and Rashid smoke in bed, their guest Doug comes out of their bathroom stark naked. While this does not lead to the expected encounter, it does allow for a great deal of comedy about how men and women feel about their bodies. The biggest laugh of the evening is when Doug who is now the only one naked in bed says, “I was not anticipating this. It’s like a seminar. Without any clothes on.”

Though Doug appears at first to be an extrovert, he is, in fact, seeing a therapist about his mommy and insecurity issues. While Leila and Rashid fight about the situation they have gotten themselves into, Doug feels more and more rejected, not realizing that they are only using him as a pawn in their own relationship games. While Rashid does not want Doug touching him, Leila discovers that she is not as liberated as she thought she was.

However, the author has still another objective. The handsome Doug (played by Quinn Franzen) is the perfect example of what was once called “the ugly American.” Everything he says only reinforces his lack of tact, sensitivity and sophistication. The anecdotes he tells in his attempt to break the ice only make things worse. It is not only his turning everything into a personal emotional crisis, but in his attempt to appear worldly, he reveals all of his biases and hang-ups. 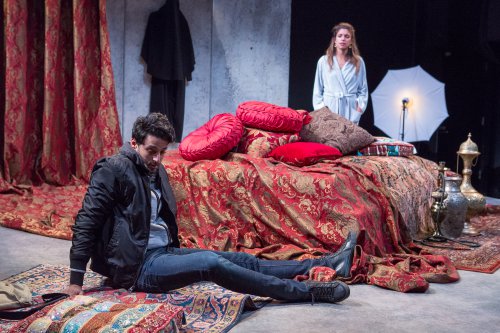 The much darker second act takes place two weeks later at a photography studio where Leila is to be shot for the cover of her book. The setting, chosen by her publisher to attract the American audience, is an Orientalist fantasy of a bedroom, complete with arabesque patterns, Middle Eastern carpets, and cushions strewn all over the space, a cliché of the visually exotic, sensual and seductive. To make it worse, it is assumed by her editor that Leila will wear the Arab abaya and niqab from which only her eyes will show, like traditional Muslim women. All three characters meet again, only this time Rashid is very drunk as he can’t deal with the situation and Doug is still fuming from his treatment in their home two weeks previously.

The biggest problem with the play is that the characters are mouthpieces for three points of view, rather than fully developed characters. Everything that is said is intended to forward one point of view or the other. In addition, the play is no more than a tease for visually setting up a situation in which we expect a sex comedy and then are subjected to an intellectual debate. The arguments are not all that articulate, nor are they really explored. Nevertheless, there is a good deal of entertainment be gotten out of the two situations presented in the contrasting acts, even though the play (which has a powerful final scene) is ultimately unsatisfying.

Chris Coleman’s staging for Threesome which began as a co-production between Portland Center Stage and Seattle’s ACT Theatre uses the original cast. While all three attractive actors are very well versed in their roles, they can’t overcome the fact the play does not allow them any passionate emoting, either physical or verbal. Alia Attallah is fine as the liberated Leila who discovers that she has boundaries that she cannot cross. Karan Oberoi makes Rashid, a modern example of his heritage and class, a dark brooding presence who suspects that Leila is holding something back – otherwise why would she not let him read her book. Franzen is mostly amusing as the sole American brought up to say whatever comes to mind and paranoid enough to feel insulted by slights not even meant for him.

The uncredited sets offer one extremely modern bedroom in grey, black and white and a picturesque Orientalist fantasy in the second half. Alison Heryer’s costumes define the characters in ways that the dialogue does not. The lighting by Peter Maradudin offers the brightness of a romantic comedy in the first act and the professional lighting for a photographer’s studio in the second. Mary McDonald–Lewis is credited with being the dialect coach for the convincing accents.