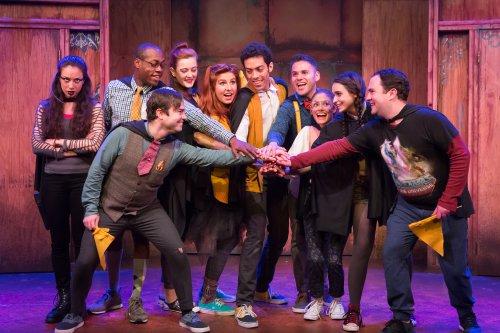 How much you enjoy Matt Cox’s Puffs, or: Seven Increasingly Eventful Years at a Certain School of Magic and Magic, now celebrating its one year anniversary, may depend on how well you know the Harry Potter books and the movies that followed. This mild satire tells an alternate but parallel story of the famous wizarding school for the members of the fourth house called The Puffs. The show attempts to cover many of the same events of all seven years in the 1990’s when Harry, Hermione and Ron attended the school. Don’t blame the hard working cast of eleven who mostly play multiple roles if you aren’t laughing uproariously. The format is much like an extended Saturday Night Live skit that overstays its welcome with a British narrator here played by A.J. Ditty.

The new story concerns Wayne Hopkins, an American boy whose parents die tragically and his Uncle Dave informs him that he is a wizard and must attend a special school in England. Wayne is sorted into The Puffs which he discovers is the house for the losers, rejects and nerds who never win at anything. His one goal is to be a hero at something – eventually – while getting through magic school. There he meets the dashing older student Cedric (James Fouhey) several years ahead, as well as another American, the nerdy math prodigy Oliver Rivers (Langston Belton) who can’t seem to succeed at magic, and Megan Jones (Julie Ann Earls), who wears Goth make-up, all black clothing and resents being there. Megan is particularly angry because her mother is a prisoner and in thrall to the Dark Lord. 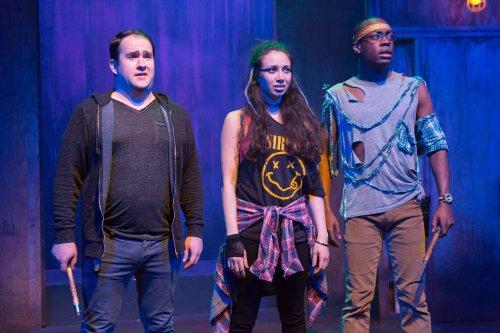 Zac Moon, Julie Ann Earls and Langston Belton in in a scene from “Puffs, or: Seven Increasingly Eventful Years at a Certain School of Magic and Magic” (Photo credit: Hunter Canning)

Kristin McCarthy Parker’s direction keeps the plot bubbling along but the satire is bland and benign and not prone to inducing laughs. While the cast are obviously not teenagers, they do a heroic job in a great many quick change roles. Fouhey is most impressive as the charming and genial Cedric who never loses his cool. Playing all of the recognizable teachers, Eleanor Phillips and Stephen Stout get their digs in. As the ostensible hero, Moon gets our sympathy by never coming out on top. Belton is a loyal sidekick as the math whiz, while Earls never drops her angry frown. Nick Carrillo is amusing as J. Finch Finchley who may just be invisible or not. A.J. Ditty is suave as the Narrator. Madeleine Bundy, Jessie Cannizzaro, and Andy Miller also give able support in a variety of other roles. 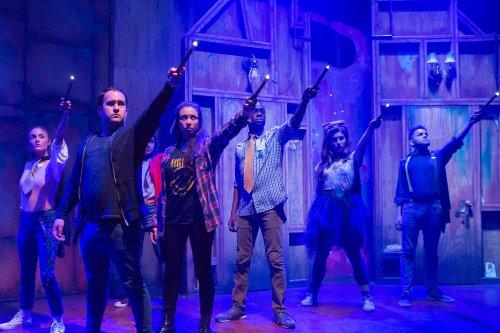 Bundy’s unit set is made up of a series of wooden doors which stand-in for all the locations at the school and occasionally open up for a reveal. Her large array of costumes are contemporary casual for teenagers. Her props often get the biggest reaction. The lighting by Herrick Goldman alternates between daytime and nighttime scenes. The original music is the work of composer Brian Hoes.

As Puffs allows its cast to ad lib at various points, the running time may vary from performance to performance. Puffs, or: Seven Increasingly Eventful Years at a Certain School of Magic and Magic (which makes references to Fantastic Beasts and Where to Find Them and the upcoming Harry Potter and the Cursed Child) is neither witty not hilarious but will tickle the funny bone of those who are well versed in the original Harry Potter stories.

Puffs, or: Seven Increasingly Eventful Years at a Certain School of Magic and Magic (through August 18, 2019)