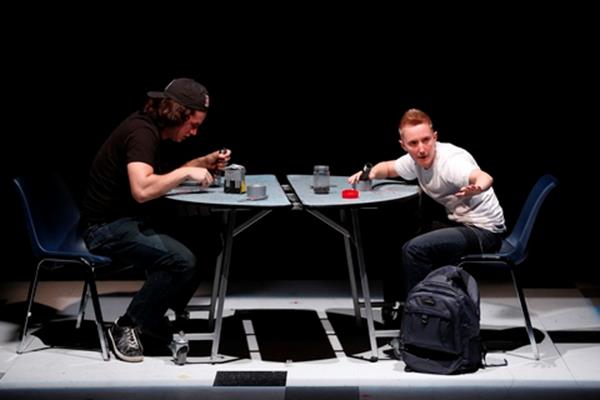 James Scully as Dylan Klebold and Em Grosland as Eric Harris in a scene from “The Erlkings” (Photo credit: Carol Rosegg)

On April 20th, 1999, 18-year-old Eric Harris and 17-year-old Dylan Klebold shot and killed 12 students and one teacher at Columbine High School in Colorado, where they were seniors. Twenty-four other people were injured before the two committed suicide.

This event is the inspiration for Nathaniel Sam Shapiro’s play, The Erlkings. Mr. Shapiro is a 25-year-old playwright who graduated from Brown University in 2012, and then completed a Masters Degree in Dramatic Writing at New York University’s Tisch School of The Arts. This play, his first published, was written and workshopped there. Its grade is not known, but at The Samuel Beckett Theatre it gets a D.

In his lengthy notes in the program, he explains that the title comes from the poem Der Erlkonig, by Johann Wolfgang von Goethe: “…it tells the story of a child being carried on horseback by his father who is ultimately killed by an evil woodland spirit, the Erlking, as the father dismisses the child’s warnings of danger.” In Harris’s planner, there was reminder to memorize it.

The stage is set with round tables and chairs suggesting a schoolroom as in the film, The Breakfast Club. Ten minutes before the show begins a young man wearing a backpack comes out and sits reading and humming to himself. Minutes later two young women enter. There is interaction. Then another young man followed by another. There is chatting and arguing and homework being done.

Visibly suspended from the ceiling on cables are numerous, differing backpacks. Throughout the play a number of them fall one by one to the ground accompanied by bombastically eerie music. It may be interpreted as visual symbolism representing the future victims of the shootings – or as anything else.

Much of the script consists of recitations of the duo’s banal, adolescent ravings taken from their journals, letters, and poems and the rest from imagined events and dialogue. There is a lengthy exchange about defecating in one’s pants. Two teachers are represented as shrill caricatures. 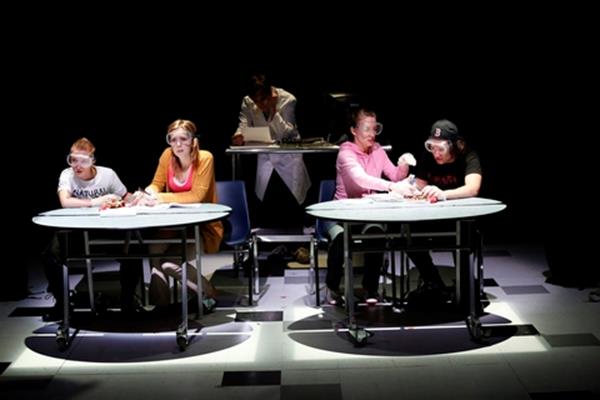 Scenes are set in the pizza store that the two cantankerously work in, as well various places at the school including the cafeteria where a male in drag plays the lunch lady, and a science class that becomes filled with explosive outbursts. There is also a fantasy sequence depicting a video game where they shoot black masked figures that dance around as zombies. They also video record themselves and are shown making pipe bombs.

The heights of pretentiousness are reached just before the conclusion of the first act with something that could be out of The Threepenny Opera or Cabaret. The duo don tails, as Eric in a top hat lip-synchs to a recording of Der Erlkonig, set to Franz Schubert’s music, while standing and dancing on a table. The play’s finale is the two in black Goth coats holding bowling balls and then a black out.

As Eric Harris, transgender actor Em Grosland is initially disorientating and perplexing. However, this performer’s great talent very soon transcends notions of gender in depicting a male role. This casting adds a much needed added dimension to the play which is non-realistic anyway. The alienation and mental instability of the character is even conveyed more realistically and uniquely by this complex portrayal. Peter Pan is rarely if ever played by a male. Why not gender-crossed casting in other roles when it doesn’t throw the material off, or even might possibly enhances it?

James Scully as Dylan Klebold forcefully captures all of the many conflicting emotions of a trouble teenager skillfully, with modulated brashness and introspection.

Blair Baker, Matthew Bretschneider, Jonathan Iglesias, Reynaldo Piniella, and Kayla Wickes, are the rest of the appealing young cast. They all succeed wonderfully in depicting the various other superficially drawn characters, despite the deficient material.

The inspired professionalism of director Saheem Ali and lighting designer Katy Atwell succeeds in making it all watchable. The fine pacing, aesthetic visual qualities, and lively characterizations from the cast evidence their exemplary work.

It is possible that such an off-putting subject could be successfully dramatized from the perspective of murderers, and to explore their motivations. Truman Capote’s book, In Cold Blood, Bryony Lavery’s play, Frozen, and even the black comedy film, Heathers, have all done so. The Erlkings with its arch and academic treatment fails at this.

The Erlkings (through December 13th, 2014)
The Beckett Theatre at Theatre Row, 410 West 42nd Street, in Manhattan
For tickets, call 800-447-7400 or visit http://www.telecharge.com
Running time: two hours including one intermission