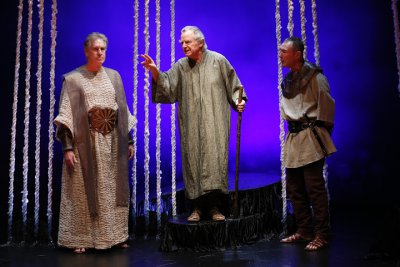 Paul O’Brien as Creon, Robert Langdon Lloyd as Tiresias and Colin Lane as the Guard in a scene from Seamus Heaney’s “The Burial at Thebes” (Photo credit: Carol Rosegg)

Robert Langdon Lloyd’s eloquent performance as the blind prophet Tiresias energizes what had been a stilted presentation of this small-scale production of The Burial at Thebes.  Before Mr. Lloyd’s commanding midway appearance, there had been a good deal of static expositional recitation and declaiming with only slight dramatic sparks.

This play is an adaptation of Sophocles’ Greek tragedy Antigone that was written by Irish Nobel Prize laureate Seamus Heaney (1939-2014) in 2003 and was inspired by The Iraq War.

Tony Walton’s set design has the small stage strewn with a few black rocks that the actors sometimes stand on and some thick fraying ropes hanging taut from stage to flies for visual effect.   The lighting design by Brian Nason is striking and moody, conveying the impact of the events unfolding sometimes with bold red hues.   Zach Williamson’s skillful sound design blends in music and effects that complement the actions.

The costume design by Linda Fisher is problematic.  Instead of timelessness, these creations attempt at representing the actual period with tunics, robes, sandals and other accessories.  The overall effect is off the rack Halloween store costumes.

Director Charlotte Moore staging resourcefully tackles the challenge of presenting an eight character classical work under very confined circumstances with mixed results.  For stretches of time, the cast stands in place reciting speeches but at times there is dramatic tension and emotional connectivity among the cast.

With a variety of accents including Irish, American and neutral, and different levels of stage experience, the cast doesn’t fully cohere as an ensemble.

At the performance under review, Rebekah Brockman as Antigone appeared to have been battling vocal issues resulting in noticeable hoarseness.  Ms. Brockman soldiered on with fierce conviction. 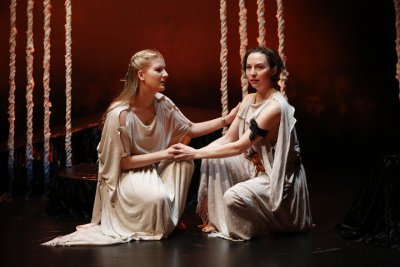 Katie Fabel as Ismene and Rebekah Brockman as Antigone in a scene from Seamus Heaney’s “The Burial at Thebes” (Photo credit: Carol Rosegg)

Paul O’Brien as Creon is regally blustery and as the play goes on becomes quite moving as the tragedy unfolds.  As his son Haemon, Ciarán Bowling has a fiery Romeo quality.  Winsome Brown’s maternal Eurydice is like a grand theatrical leading lady with her melodious voice and expressive gestures.

Katie Fabel as Antigone’s sister Ismene has a pleasant earnestness.  Colin Lane as the Guard and Rod Brogan as the Messenger both expertly provide bits of comic relief as well as necessary seriousness.

The plot involves Antigone defying her uncle Creon’s edict against burying her brother Polyneices who was slain in a war.  As she is to marry Creon’s son Haemon, her punishment instigates a series of tragic events that envelop all of the major characters.

Poet Heaney’s adaptation is a streamlined, simplified and faithful representation with Irish phrasings and slight references to George W. Bush that effectively tell the story.

Though patchy, this production of The Burial at Thebes in 75 minutes fitfully succeeds at depicting this classic tale with some very compelling sequences.

The Irish Repertory Theatre at the DR2 Theatre, 103 East 15th Street, in Manhattan