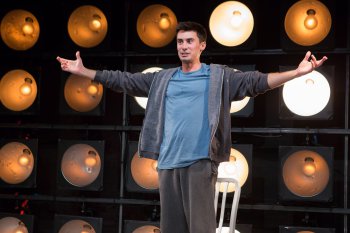 British playwright Philip Ridley, a proponent of “in-yer-face theatre,” has jolted audiences out of their seats with such plays as Mercury Fur and Tender Napalm. His latest New York offerings are two companion one-person plays being produced under the overall title “Tonight/Jungle.” While a little bit less confrontational, in the capable hands of brilliant actor Harry Farmer and actress Robyn Kerr, these plays are no less visceral. Though they are totally self-contained and appear on separate nights, the two plays have many things in common.

The protagonists of both plays are fifteen, have been abandoned by their parents, and are desperate for love and affection. In each case, they go about it a different way. Unfortunately, the paths they choose lead to unnamable violence. Both appear to be talking to a psychiatrist or group therapy session. In Steven C. Kemp’s scenic design, the plays take place on a stage empty except for one metal chair and four rows of 28 flood lights on the back wall which alternately go on and off, as though we are in an interrogation room.

Both teenagers are desperate for our approval and understanding of their lives and what they did, unlike the tabloids which have apparently had headlines branding them as monsters. Listening to their sides of their stories, we are initially conned into a false sense of security – always a dangerous thing to do in a Philip Ridley play. By the end, we discover these are damaged youth we would not want to know personally, but we understand their motives entirely from their point of view.

“Tonight with Donny Stixx” is more of a performance piece as its title character considers himself an amateur magician and is continually using the language of vaudeville, going so far as to involve members of the audience. Using the slogan, “My name is Donny Stixx – the Boy with Tricks,” he tells us that he is most alive when he is onstage. A sensitive, artistic boy, he becomes homeless when his perfectionist mother commits suicide when he is 12 and his father proceeds to have a mental breakdown. He goes to live with his Aunt Jess who encourages him in his hobby of magic, going so far as to book him to appear at local children’s birthday parties. When he is chosen for an adult venue, he finds out the hard way that he may not be as good as he thinks he is. He then sets out to become a YouTube media celebrity. All along we have been seeing Donny as he sees himself, not as others see him. 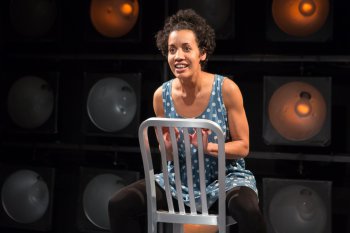 Andrea, the heroine of “Dark Vanilla Jungle,” is also rendered homeless at age 12 when her father gets out of prison and her parents abandon her to live with a grandmother she doesn’t know. While in high school, Andrea meets a young man claiming to be 23 who pretends to love her and she becomes sexually involved with him. Although she doesn’t realize it, he is grooming her to pimp her out to his friends. While wearing his engagement ring, Andrea recognizes him at an ice cream parlor with a wife and three children. When her grandmother ends up in the hospital, the now pregnant Andrea goes about finding a family and a husband of her own.

Both Farmer (under the direction of Frances Loy) and Kerr (directed by Paul Takacs) are kinetic, animated and compelling. They connect with us from the moment that they begin and never let up for a moment. Though the plays are monologues and the set never changes, their physical characterizations make use of the entire stage, and they are never still for a moment. Their nuanced, layered performances reveal even more than the author’s words. Ridley’s rich, detailed language is made poetic in their delivery. As Donny Stixx, Farmer’s periodic outbursts brand him as a sociopath, while Kerr’s Andrea becomes more and more wound up by the story she is telling. The final moments of both plays will leave you breathless wondering how we ever got here.

Dante Olivia Smith’s ever-shifting lighting design becomes both a character in the story as well as a way of changing the setting. The subtle sound design by Toby Jaguar Algya also becomes a potent character. Loy and Takacs have brilliantly stayed out of the way of the extremely talented actors who never seem to be acting, though they are mostly likely a good deal older than 15. Philip Ridley’s Tonight/Jungle is more accessible than some of his other plays that have reached our shores, but both plays will make you know you have been through a theatrical experience. Darkest adolescence has never been like this before.