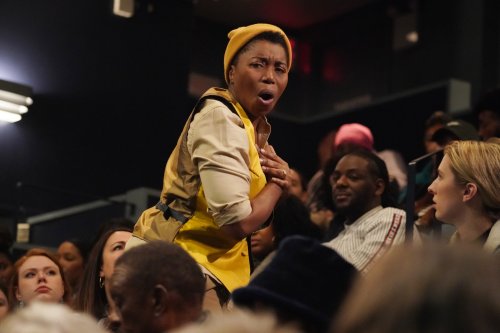 Receiving the program for the cryptic Where We Stand, which is performed with the house lights on and the audience directly engaged after it’s over, still doesn’t explain much. Author Donnetta Lavinia Grays’ seemingly allegorical solo play is more concerned with being a happening rather than a defined theater piece. Signs in the hallways and staircases indicate “This way to the town meeting.” The wide-open stage is minimally set with an American flag, folded chairs, a chair and a small table. Upon arriving, the audience is invited to go onstage to partake of free coffee and mini-doughnuts. “Oh! We’re supposed to be at a town meeting.”

At the performance under review, Ms. Grays played the role of “The Man” which is performed on alternate nights by David Ryan Smith. The vivacious Grays sings, dances and plays numerous characters while frequently roaming through the audience, often speaking to them and delightfully moving all over the stage. Her rich writing is in fiery poetry slam mode and if the narrative is vague, the style often excites. Her dynamic presence is almost enough to carry the show.

Amidst the hubbub that includes coerced audience clapping and singalongs, we attempt to discern what the point is. It appears to be the story of an outsider who takes up residence in a rural locality and is accused of a crime;  the audience votes whether to convict or acquit him. Several audience members have been given pages of lofty speeches to recite. “The words your fellow Townspeople quoted come from Dr. Cornell West and Coretta Scott King,” states the program. Where We Stand’s 70 minutes are mildly engaging if often baffling and do make some impact. 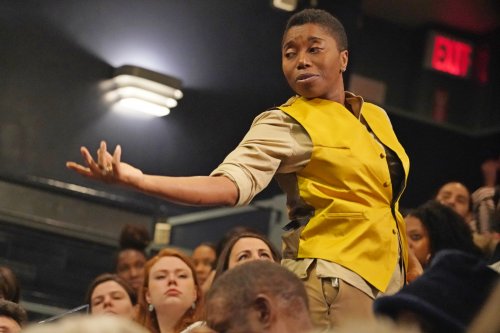 It is probable that Where We Stand is intended as a commentary on the contemporary United States’ political scene. Though noble, the presentation is too mired in abstraction to fully succeed.