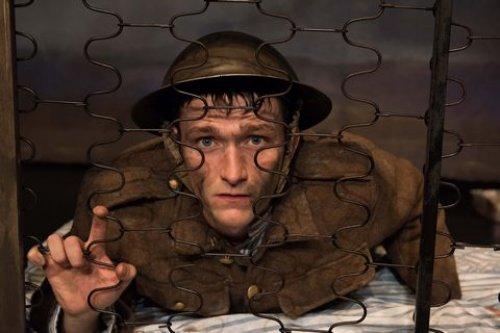 Shane O’Regan in a scene from “Private Peaceful,” adapted from the novel by Michael Morpurgo (Photo credit: Ahron R. Foster)

Shane O’Regan’s exceptional performance and director Simon Reade’s highly theatrical staging invigorates Private Peaceful, a familiar and formulaic World War I solo play. It’s based on War Horse author Michael Morpurgo’s young adult novel of the same title that Mr. Reade has adapted for the stage.  This dutiful treatment of the subject matter would perhaps be best appreciated by adolescent audiences. Anyone else could find it to be a by the numbers narrative with presentational flourishes.

The first half of this 80-minute work details the life of the appealing Thomas “Tommo” Peaceful, a nearly 16-year-old rural English farm boy. We learn of his underprivileged life and how he ended up joining the army with his older brother Charlie despite being under age. After he arrives in France, it’s then on to the battlefields of Belgium for the second half of the play. The horrors of the trenches with its rats, lice and incessant rain are described as is gas warfare. Bellicose officers with their irrational beliefs lead to the play’s tragic finale that’s reminiscent of Stanley Kubrick’s bleak 1957 film Paths of Glory.

Wearing a realistic period uniform and donning a metal helmet, the youthful and animated Mr. O’Regan recalls the electric persona of the young Tom Courtney as he vividly portrays numerous characters besides the wide-eyed Thomas. Utilizing his rich vocal talents and wiry physique, these strong characterizations include his solid brother, a vicious old woman, and various martinets. If nothing else, Private Peaceful showcases O’Regan’s considerable talents. 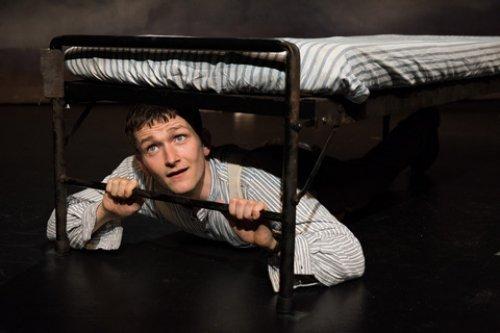 Shane O’Regan in a scene from “Private Peaceful,” adapted from the novel by Michael Morpurgo (Photo credit: Ahron R. Foster)

In collaboration with movement director Sue Mythen, Reade has him in constant motion often balletically jumping about and fluidly positioned around the stage that’s bare except for a cot. Reade coordinates the production’s top-notch technical elements into a visually successful presentation.

In addition to that pivotal bed, Anshuman Bhatia’s minimal yet creative scenic design has a lovely sky backdrop with beautiful clouds. Mr. Bhatia’s lighting design is equally entrancing with its shimmering qualities and dramatic fades. Sound designer Jason Barnes bracingly renders the battle sounds and music of the era.

With Shane O’Regan’s compelling turn and its accomplished trappings, Private Peaceful does have its virtues but is a relatively flat experience.