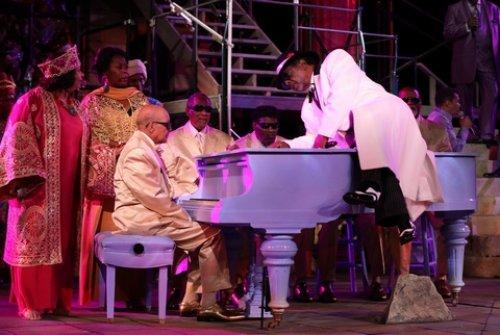 The Blind Boys of Alabama with Shari Addison (Ismene), Greta Oglesby (Antigone) and Jay Caldwell (Deacon Creon) in a scene from The Public Theater and Onassis Foundation USA’s production of “The Gospel at Colonus” (Photo credit: Joan Marcus)

The Gospel at Colonus, originally produced at the Brooklyn Academy of Music in 1983 and eventually moving for a short run on Broadway in 1988, was an honest attempt to dovetail ancient Greek pantheism with Christian monotheism, Sophocles’ tale of tragic hubris with the New Testament’s promise of redemption in the afterlife.

Based on Sophocles’ Oedipus at Colonus, Gospel was written and directed by Lee Breuer (libretto and lyrics) and Bob Telson (music), both experienced experimental theater geniuses:  Breuer, artistic director of Mabou Mines, and Telson, composer of songs for stage and screen.

So many thoughts flitted through my mind as I settled down to see this revival of this once groundbreaking production.  Would it still inspire awe or respect?  Would it appear dated?

The answers came quickly: No and yes.  The jolt of two dissimilar genres tethered together for the “betterment” of them both is no longer so stimulating as cultural and gender barriers are falling everywhere, making The Gospel at Colonus, however well-intentioned it was in 1983, a bit of a clunker today, despite the honest efforts of the production staff at the Delacorte to keep this hybrid alive and worthy. 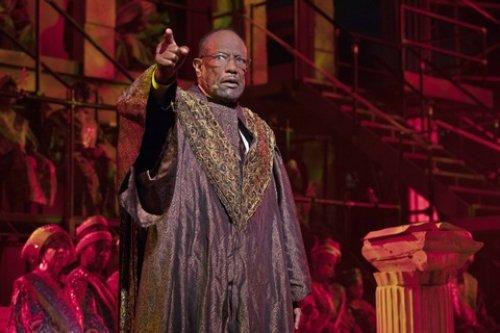 The Reverend Dr. Earl F. Miller as The Messenger in a scene from The Public Theater and Onassis Foundation USA’s production of “The Gospel at Colonus” (Photo credit: Joan Marcus)

Gospel sticks to the bare bones of the Sophocles play—the middle play of his “Theban Trilogy”—in which Oedipus, King of Thebes, having blinded himself after discovering he had slain his father (Laius), married his mother (Jocasta) (with whom he fathered daughters Antigone and Ismene and sons Polyneices and Eteocles),  wandered in self-imposed exile for years.  Now, accompanied by loyal Antigone (Greta Oglesby), he comes to Colonus to bring his story to a tragic conclusion, involving much antagonism and soul searching.

He faces the wrath of the townspeople (here portrayed by the Voices of the Flame Choir), the coldness of Theseus, King of Athens (Wren T. Brown) and the pity of his children until he dies in seclusion.  Oedipus, for some reason, is portrayed by the Blind Boys of Alabama who were in the original cast.  They are Jimmy Carter, Paul Beasley, Ricky McKinnie, Ben Moore and Joey Williams.

The Messenger who narrates the play and attempts to bring its many emotional strands together is played by Reverend Dr. Earl F. Miller who is dignified and totally involved.

The complexities of this Greek tragedy are shoe-horned into a Gospel service with songs ranging from the thoughtful (“The Invocation”) to the formal (“Creon Comes to Colonus”) to the awe-inspiring (“The Descent of Oedipus”) and finally to the heartbreaking (“The Sermon” and “Closing Hymn”), all variations on the well-known Gospel/Blues/Christian Hymn musical repertory. 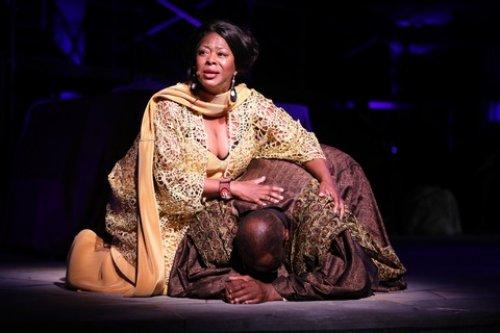 Greta Oglesby as Antigone and The Reverend Dr. Earl F. Miller as The Messenger in a scene from The Public Theater and Onassis Foundation USA’s production of “The Gospel at Colonus” (Photo credit: Joan Marcus)

The production is quite extravagant, but misguided.  Alison Yerxa’s set evokes ancient Greece with its ruined columns and crumbling walls, modernity peeking through via layers of metal stairways upon which the chorus is forever positioned.

As beautiful as the set and costumes are, they are ill-advised.  The whole point of The Gospel at Colonus is that it is an ancient tragic myth performed as a Black Pentecostal Christian service, even if it is held outdoors.

In addition to the design missteps, Lee Breuer’s direction keeps the pace of the show somewhere between glacial and catatonic.  He isn’t helped by a poor amplification system which makes it difficult to pinpoint who is speaking/singing at any time.

Paradoxically, despite the drawbacks of this staging, the last fifteen minutes are moving. It’s the only moment when the clash of the two cultures finally combines to become formidable drama. Oedipus suddenly becomes a mourned Christ figure as vocal soloist Willie Rogers beautifully sings “Now Let the Weeping Cease.”

For tickets, visit http://www.publictheater.org for instructions on receiving free tickets.

Running time:  two hours and 25 minutes including one intermission