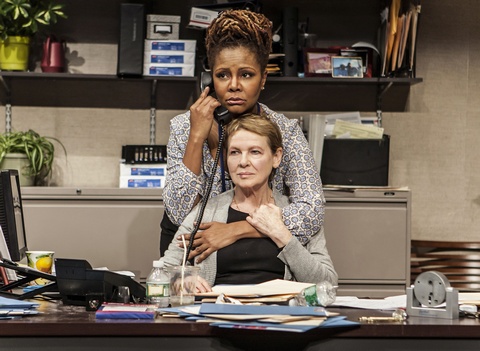 Tonya Pinkins (above) and Dianne Wiest (below) in a scene from The New Group’s production of “Rasheeda Speaking” (Photo credit: Monique Carboni)

Jaclyn has been out sick for five days from her job as clerk for Dr. Williams. While she has been gone, the doctor has elevated her co-worker Ileen to office manager over the two of them. The morning of Jaclyn’s return, Dr. Williams tells Ileen he feels that Jaclyn “doesn’t fit in” and that “her work isn’t very good.” He would like Ileen to keep notes on her behavior in order to have stats for Human Resources to arrange a transfer. As Ileen and Jaclyn have become friends in the six months that Jaclyn has been working here, Ileen is hesitant to take on the responsibility but Dr. Williams convinces her that it is part of her job description.

What this description of Chicago-based writer Joel Drake Johnson’s riveting Rasheeda Speaking being given its New York premiere by The New Group at the Pershing Square Signature Center leaves out is that Jaclyn is black and that Dr. Williams and Ileen are white. Jaclyn is convinced that her illness has been caused by toxins in the air which are giving her headaches (you can take this as a metaphor if you wish). However, she is immediately rude, abrupt, unhappy and can’t look Dr. Williams in the eye. Plus she has her own blind spot when it comes to her Mexican neighbors. But is Dr. Williams a racist or does he simply want a better clerk. Jaclyn who has no intention of returning to the mind-deadening toil of the copy room senses that something is wrong. She is ready to fight for her job even if it means manipulation, lies, treachery and deceit. Let the games begin.

What is Dr. Williams’ motivation? We never know for certain. We do witness Jaclyn’s behavior as rude, abrupt and challenging.  She certainly has a chip on her shoulder and goes looking for slights as a person of color. But does this mean that her work isn’t good enough? And should the boss have asked an underling to do his dirty work for him? Provocative questions worth pondering.

With two consummate performers, Tonya Pinkins and Dianne Wiest as Jaclyn and Ileen respectively, this becomes a power play of office politics and racism to remember. Pinkins, who won the Obie, AUDELCO, Lortel, Garland, NAACP Theater and Drama Critics Circle Award for Caroline, or Change, gives a multilayered performance that is almost frightening in its intensity. As she fights for her job, even though Ileen has claimed not to be watching her, she runs the gamut of roles from friend, to colleague, to adversary, to fabulist, to opponent, to enemy as she attempts to undermine her new boss. 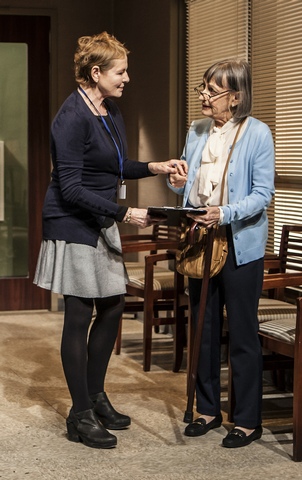 Dianne Wiest and Patricia Conolly in a scene from The New Group’s production of “Rasheeda Speaking” (Photo credit: Monique Carboni)

Wiest who in recent years has specialized in modern stage classics such as Ostrovsky’s The Forest and Chekhov’s The Seagull and The Cherry Orchard makes us sympathize with her distress as she is asked to betray a colleague who goes out of her way to give her evidence. Her Ileen is the nervous type, the kind of person who never wants to give an opinion either way, and prefers to stay neutral, while Pinkins’ Jaclyn is strong and decisive. Seeing them play off of each other is like watching great athletes at the top of their game. Tony Award-winning actress Cynthia Nixon making her directing debut comports herself like a real pro of many years of staging plays, without a single slip.

Darren Goldstein offers suave blandness as the doctor who precipitates the crisis, always attempting to be careful in the mine field that the office has become. Veteran actress Patricia Conolly gives an excellent cameo as an elderly patient who reveals her old-fashioned, innate bigotry with every sentence she utters. The spot-on setting by Allen Moyer seems to have been moved onto the stage of the Linney Courtyard Theatre directly from a working establishment, so detailed and real does it look. Toni-Leslie James’ costumes for the four days covered by the play are exactly what these characters would wear. The lighting by Jennifer Tipton could not be more unobtrusive in creating a true to life office environment.

Under the assured direction of Cynthia Nixon, renowned actresses Tony Pinkins and Diane Wiest turn Joel Drake Johnson’s Rasheeda Speaking into an acting tour de force. A play which investigates office politics and concealed racism, Rasheeda Speaking is a provocative work for our times which asks some serious questions. This spellbinding play increases the tension in each scene to an almost unbearable pitch. Just try taking your eyes away from the stage.