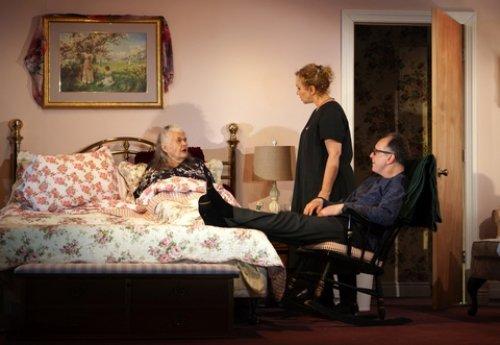 Documentary film maker Lily Thorne’s first play, Peace for Mary Frances has the ring of truth so that one assumes that it is autobiographical. On the other hand, it has all the faults of a first play: it is too long for its content, attempts to cover everything in one play, and it resembles a screenplay with its countless number of scenes. Given a first-class production by Lila Neugebauer (with an unfortunately claustrophobic setting) for adventurous theater company, The New Group, Peace for Mary Frances is ultimately tedious and unsuccessful. Although legendary actress Lois Smith is given yet another bravura role, this is not enough to save the play.

Mary Frances Davidian (Lois Smith) is dying of terminal obstructive pulmonary disease with her lungs filling up with water. As she refuses to go to a nursing home, it is decided that she will do hospice at her house in West Hartford. However, surrounded by her dysfunctional family, things are not going to be easy. All of her children have neurotic, passive-aggressive personalities, and two of them live a couple of hours away. Her daughters are like oil and water and can hardly be in the same room without fireworks. And Mary Frances herself plays one off against the other, only making things worse.

Of her three children, youngest daughter Fanny (Johanna Day) who lives and works at the local Y nearby is a recovering drug addict and entirely unreliable. Divorced son Eddie (Paul Lazar) is a lawyer in Boston and has his own cases to handle. Middle child Alice (J. Smith-Cameron) who lives in New York, along with her television star daughter Helen and her married daughter Rosie who has two children including a new baby, is an astrologer and is currently broke. Seeing there is no choice, Alice warily volunteers to be her mother’s caretaker for these last few weeks of her life – if Mary Frances will pay her a weekly salary in order to pay her bills as she can’t work from West Hartford. Once hospice begins, add to the mix hospice nurse Bonnie, psychologist Michael, and eventually Clara, a home healthcare aide. 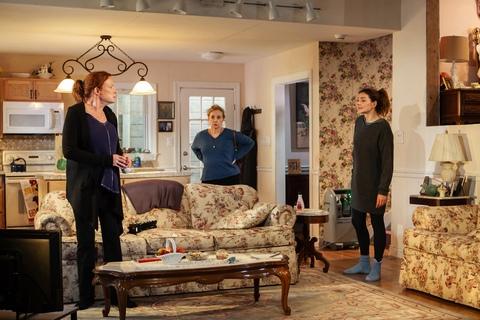 We learn a great deal about hospice, possibly more than one might want to know in a play. While most death watch plays like Edward Albee’s All Over and Scott McPherson’s Marvin’s Room, take place in another room from where the elderly person is dying, Mary Frances alternates between the downstairs living room/dining room and the upstairs bedroom of her split-level house. Unfortunately, this 21-scened play with at least a dozen more scenes which switch between Mary Frances’ bedroom and the living room where the rest of the family eat or watch television requires endless jump cuts like a film and endless lighting cues from designer Tyler Micoleau.

And worse yet in a drama that is not a dark comedy, the family is obnoxious, arguing, fighting, making trouble for each other and Mary Frances. Alice whines and complains about past and current grievances. Fanny who we are warned tends to fly off the handle makes a great deal of trouble for the others, while passively silent brother Eddie (who is his mother’s inept lawyer) opts out, leaving the details and the fighting to his sisters in confrontations that seem to repeat themselves too often. All of them bring up old recriminations unceasingly, many of which are remembered incorrectly. There is no peace for Mary Frances and with 21 scenes and not enough variety, the play grows tedious in the way of cinema verité that goes on far too long even though one admires its verisimilitude. The story takes only six weeks but it seems to go on much longer.

While the cast is uniformly fine as well as believable, they can’t keep the characters from being as unpleasant as they are written. We are told by the psychologist that he has seen much more dysfunctional families, but these people are not fun to spend much time with. Smith beautifully delineates Mary Frances’ deterioration as well as recounting memories both repressed and well-known while she continues to have flashes of lucidity, keeping a strong hold on her family. As Alice who continually plays the victim card, J. Smith-Cameron makes a strong impression as the daughter who grudgingly gives up her life to care for the mother who at one time wrote her out of her will. Day, seen during the 2016-17 season in the Pulitzer Prize-winning Sweat as factory worker Tracey who becomes a drug addict by the end of that play, is the devious and untrustworthy Fanny who smokes in a house with an oxygen tank and whose own daughter refuses to see her. Lazar as the uninvolved Eddie would be amusing if the play allowed him to be. 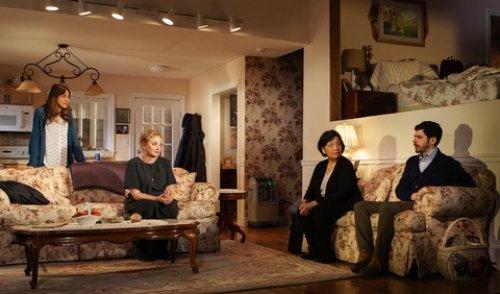 Mia Katigbak has the soothing, restful quality of the professional caretaker as the hospice nurse, while Brian Miskell as the psychologist on the case is too low-key to make much of an impression. As Clara, the home healthcare aide who only shows up in the concluding scenes, Melle Powers is an efficient, adept addition to the team who reveals little of herself. As Alice’s neurotic older daughter Helen with a hit television series and a large following, Heather Burns is often amusing between bouts of grousing. Natalie Gold as Rosie, mother of two with an understanding husband at home in New York, is less volatile but more resigned.

Director Lila Neugebauer has previously demonstrated a knack for new work with such plays as Annie Baker’s The Antipodes, Brandon Jacobs-Jenkins’ Everybody, and Sarah DeLappe’s Pulitzer Prize-nominated The Wolves. Here her staging is relegated to that of a traffic cop as the cast troops upstairs and down again in Dane Laffrey’s ungainly two-tiered setting. It all looks very much like the taping of a movie or television show. One assumes a filmed version will iron out many of the problems and free the story from its claustrophobic two-room setting.