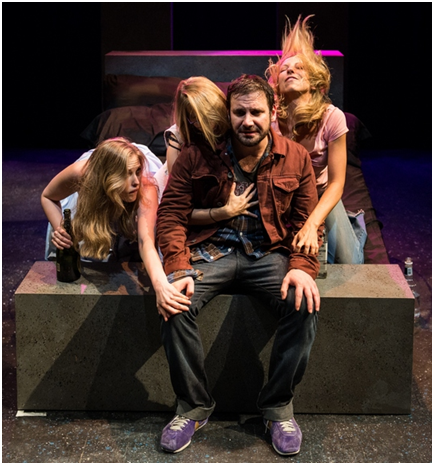 The Amoralists are presenting The Gyre, a two-play repertory which they say explores “man’s vicious cycles.” The plays, The Qualification of Douglas Evans by Derek Ahonen and Enter at Forest Lawn by Mark Roberts, each feature the play’s author in the central role of the play he has written. The vicious cycle of each play is its own; the plays are not congruent. Ahonen’s play focuses on the cycle of alcoholism seen so often in families. Roberts has centered his play on the vicious cycle of power the successful TV producer/writer exerts on all around him. Both plays are attacked with the same Amoralist bravado of attempts to shock. Both plays in this regard succeed fitfully. Both plays are pretty sickening.

Ahonen lists himself among his various activities as the writer—not playwright – of nine additional plays to this present effort, all of them performed by The Amoralists, his theatrical organization, seven of which he has also directed. He also acts. Amoralist productions have been admired for their energy, their daring, no-holds-barred language and behavior. Ahonen plays the eponymous Douglas Evans, almost never off the stage for a moment. Spanning thirty years, told in flashes of memory, the play is about the making of a playwright, from early childhood already the victim of parents with handicapping conditions: his father is a raging alcoholic, his mother an obsessive, clinging Catholic. He lives with them until he is forty-one, never achieving success as a playwright.

Over the years, he has a series of girlfriends, all whom ply him with booze, which seems a necessity, judging from the evidence of their sex lives. Practice over four girls does not seem to improve his skills as a lover, physically, mentally, emotionally. Eventually, one of his plays is well received and he becomes a ranting, abusive, alcoholic boor, to add to his already one hundred percent unattractiveness. He is an overpoweringly repulsive spectacle.

Presenting himself thus, in the character of Douglas Evans, with such vigorous, non-stop awfulness, takes courage as well as rampant ego and a chilling comment on his, the actor/playwright’s own life, which might well have been written and delivered with an ironic god-awful humor and given the audience something to care about but Ahonen sticks to his guns. In spite of director James Kautz throwing everything at the play he can invent – he has to – the story is so shopworn – and all the conjured staging, it takes a brio cast to keep up, particularly Penny Bittone who plays Douglas’ aching, boozer of a father, also plays Mike, his best buddy whose girl he steals, also the floppily inept novice director of his first flop, as well as a cop who takes him into custody, all distinct characterizations, not cardboard. Barbara Weetman as his mother also fares well in additional roles. David Harwell provides a setting that surrounds a feverish, swinging bed with spectral walls that director Kautz uses to suggest other dimensions.

It’s the girls, girls, girls Douglas so ineptly beds who are giddily alike, giddily different as we get to know them too well, although only one is chosen – by playwright? by director? – to reveal what her underclothing usually conceals but then, what would an Ahonen play do without a portion of bare groin? Gotta keep ’em coming back. Kelly Swindall, Mandy Nicole Moore, Samantha Strelitz and Agatha Nowicki all perform as directed. The sheer bloody mindedness of the Ahonen exposition is a dark damnation of the human condition and a further growing malaise in his plays which have slowly lost their raunchy sense of humor. It’s enough to make you look forward if you’re a masochist, to the next play in the cycle.

The Qualification of Douglas Evans (performed in rotating repertory through August 9, 2014)
The Amoralists
Walkerspace, 46 Walker Street, between Church Street and Broadway, in Manhattan
For tickets or information, visit http://www.TheAmoralists.com