There is so much to enjoy about Woody Allen’s Bullets Over Broadway, I’d gladly recommend it to anyone. And I certainly look forward to seeing it again. It is a big, bright production–handsomely mounted, with beautiful sets (by Santo Loquasto) and costumes (by William Ivey Long), for the most part very smartly staged (by Susan Stroman). It has some terrific songs, lots of laughs, and a dream cast. Much of the time it is a delight. The best scenes have a polish and flair that represent Broadway at its best. But there are also, frustratingly, moments that don’t work, some lines that fall flat, some scenes where I was aware of pros working efficiently and conscientiously, but somehow the magic was missing. At night’s end, I left the theater grateful that I’d seen the show and hoping it will enjoy a good long run–it adds needed life and color to Broadway. But I also left vaguely disappointed. Because this musical could have–and should have–been better. How did I feel after seeing this show? The experience was something like going to a fancy restaurant for a seven-course meal, and finding that most of the food was wonderfully prepared–really a treat–but a few items were surprisingly bland or stale, or beginning to go bad. And the shortcomings, which were simply too significant to ignore, took some of the shine off the night.

The cast of Bullets Over Broadway–with such delightful performers as Marin Mazzie, Karen Ziemba, Nick Cordero, Zach Braff, Vincent Pastore, Lenny Wolpe, Brooks Ashmaskas–is extraordinary. You rarely see a musical comedy so wonderfully overstuffed with talent. (That’s reason enough to go see this show. It is a terrific cast.) And Marin Mazzie is giving the best performance of her career.

As expected, the script by Woody Allen, based on his fondly remembered film of the same name, has plenty of funny lines. And the basic premise–about a gangster helping to write a Broadway show in the 1920s–is inherently intriguing. Director/choreographer Susan Stroman, assisted by associate director Jeff Whiting and associate choreographer James Gray, has given us some really wonderful scenes. I love the way each act of this two-act musical comedy opens.

But every once in a while, alas, the show simply misfires. I’ll give one example. The show is rolling along smoothly, with one hearty laugh following another, and the show feels irresistible–and then Woody Allen has the leading character awkwardly utter a line that breaks the mood entirely: “I wrote my first play at school when I was eight to celebrate Thanksgiving; John Alden is turned down by Pocahontas so he rapes the turkey.” It’s not funny. It doesn’t even fit the character. The guest I went with said: “The last thing I wanted to hear was a joke dealing with a child and rape.” I wish that terrible line could be excised.

At another point, I simply could not see the key players from my orchestra seat. The way the set was designed, the way the scene was blocked, I could hear but not see the key players. The scene could have been staged more wisely, so that the players would have remained in sight. In my many years of theater-going, I’ve never encountered that problem before (except in shows with some seats clearly defined as “obstructed view” seats).

The show has a big cast (nearly 30 players), and they sing and dance with flair. And what a treat it was, I might add, to see such great tap dancing! I haven’t seen tap-dancing gangsters like that since Sugar!

But every member of the cast I saw appeared to be white. In a musical comedy with a really big cast, am I to believe there were no available performers of color who could have sung and danced well? And I must stress, this show’s terrific period score features song after song written back in the 1920s and ’30s by top black songwriters: Jelly Roll Morton, Andy Razaf, Don Redman, Clarence Williams, Perry Bradford, Porter Grainger…. You have to read the small-print music credits to find their names. But this richly melodic show draws heavily from black culture of the 1920s and ’30s; the show would not be half as satisfying without the songs of Morton, Razaf, Redman, Williams et. al –the best black songwriters of .that era. Their contributions are no less crucial to the show’s success than the contributions of Allen and Stroman. Which makes it feel all the more odd to me that the cast does not include any black singers and dancers. I am not saying that every show produced in the US must have a quota of black artists, but in a musical this huge, and featuring so many wonderful songs by great black songwriters, it seems odd to me to have what appears to be an all-white cast.

The score, I should stress, includes some outstanding–and very wisely chosen–vintage musical numbers. Woody Allen deserves a lot of credit–more than he’s gotten anywhere I’ve seen–for the song selection. There are a lot of fun numbers. Some are familiar, some are far-from-familiar.(Woody Allen–besides being a great filmmaker–is an expert on music of this era; his own wonderful New Orleans-style jazz band has been playing tunes from this era, by Jelly Roll Morton, Clarence Williams, and others, in New York City and elsewhere for decades.) Most of the numbers Allen has picked for this show pay off well.

Some critics have said it’s a pity the show does not have a new, original score by contemporary songwriters. I disagree. Allen has selected terrific vintage numbers that are fun in their own right and fit perfectly the tone of the show. I don’t know many contemporary writers who could write 1920s pastiche songs (which a comedy set in the 1920s would require) that would land as well, or evoke the period as well, as most of these songs do. (And Glen Kelly deserves credit, too, for providing additional lyrics for some of the songs, and fresh arrangements, to help them serve the storyline better.)

Some of these great old songs will be unknown to the average theater-goer of today; they are so old they might as well be new. And they are a joy to hear. What a treat it is, for example, to hear Jelly Roll Morton’s “Good Old New York.” This is a superior melody by a major jazz composer. It will be new to most audience-members. It’s done with respect and flair. And it’s a just a pleasure to hear. That number is over all too soon. 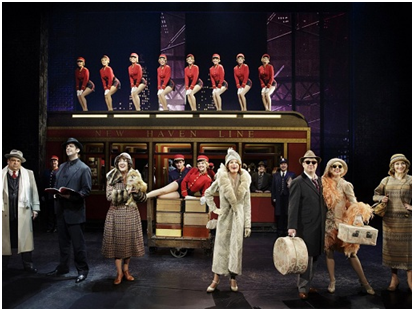 The score includes so much good music, I think it’s a pity the show does not have a proper overture and/or entr’acte. The late master songwriter Jule Styne said it was no accident that Broadway audience members–back in Broadway’s golden age–so often left theaters humming the tunes. Composers made sure the best melodies were showcased well in carefully constructed overtures, introduced and then reprised by singers in the shows, and also used wisely in underscoring. So that by the time audience members left the theater, the best tunes were lodged well in their heads. Bullets Over Broadway boasts such really great songs–from “Runnin’ Wild” to “Good Old New York”–it could, and should, have had a killer overture and entr’acte. I would have loved to have hear a hot cornet or clarinet rising above the band, putting over such great Jazz Age melodies with aplomb in a first-rate overture. (Styne’s musicals, such as Gypsy and Funny Girl, boasted superb overtures; you fell in love with Styne’s best melodies before the show itself really got underway.) If audience members heard a quality song like “Good Old New York” showcased well in an overture, sung and reprised in the show, and used well in underscoring, they’d leave the theater humming it. An opportunity was missed here.

Not every song works perfectly in this show, a couple of the songs have been done definitively by others (such as “I Ain’t Gonna Play No Second Fiddle”–one of Bessie Smith’s signature songs); there’s no need to hear them being done in milder, blander, less effective ways here. But most of the shows work well. And the best moments of Bullets Over Broadway have a kind of razzle-dazzle Broadway sorely needs.