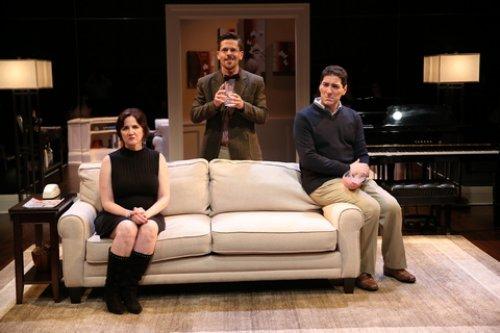 Though A.R. Gurney chose a familiar definition of the theater as the title for his 1992 play, The Fourth Wall ultimately proves to be less about the theater than about its four characters. And although these four characters are straightforward enough as written by Gurney, director Christopher Burris does not help his cast to locate them in any way, shape or form, in the current Theater Breaking Through Barriers production.

Though the company is living up to its mission of “advancing the work of writers and performers with disabilities”–two of the four actors in this revival of The Fourth Wall include one bound to a wheelchair and another with hearing problems—although this particular production does not make for a very felicitous theatergoing experience. And unenlightened readers should be informed that “the fourth wall” is the theatrical terms for the blank wall at the front of the proscenium, permitting the audience to observe the play or the action as it unfolds. 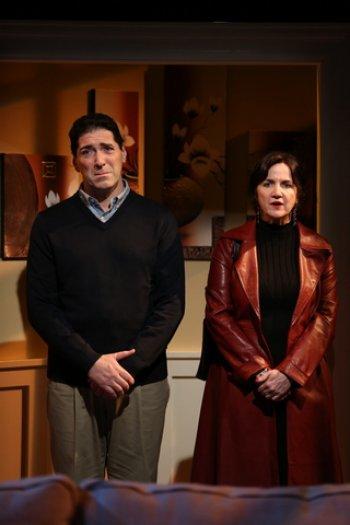 Set in Roger and Peggy’s living room, at their house in Buffalo, New York–in a rather simple set design by Bert Scott–the play commences when Julia arrives from the Big Apple. Roger has invited her to see the predicament he’s living with, with–as Julia puts it–“This great blank wall,” adding that the “other walls are quite attractive.” And as she says a little bit later, “This room makes you feel, the minute you walk in, as if you were acting in a play.” And of course, Pamela Sabaugh, who plays Julia, is doing just that, albeit not particularly well.

The patter includes Roger’s referring to what they’re drinking as “stage champagne” or “ginger ale,” and there are multiple references to other playwrights, such as August Wilson, Neil Simon, and even Aristophanes. And Floyd, who’s homosexual, says, “Gays on stage make for fantastic lovers,” without any context. Every so often, the four characters break out in song, including “After You, Who,” and ultimately a Cole Porter tune, which may be the playwright’s way of padding an otherwise insubstantial script: apart from Gurney’s meta-theatrical conceit, there’s not much else going on in The Fourth Wall. It’s more like an extended skit than a play. Consider yet some more extraneous lines: “No one smokes on stage anymore,” and “I think we should have a scene together. 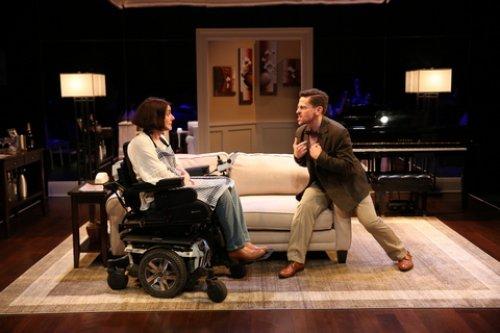 It’s hard not to disagree with Roger when he says, “We’re getting all hung up on plot here.” On the other hand, what exactly is the plot? It’s also a while before Peggy arrives on stage and asks Julia what brings her back to her “suburban roots.” The blank “fourth” wall immediately comes up, and Peggy says, “In the theater, they call it exposition.” A soon-to-follow reference to Julia having “dated” George W. Bush in college becomes a surefire indication that Gurney updated the play, and it’s this second version that Theater Breaking Through Barriers is staging, but it doesn’t do much to help the situation.

Like the character he’s playing, Nicholas Viselli is very sure of himself as Roger. Ann Marie Morelli as Peggy and Stephen Drabicki as Floyd provide little to nothing, as their makeshift characters. The drab costumes are credited to Courtney E. Butt, and the sound designer is Andy Evan Cohen.

The Jeffrey & Paula Gural Theatre at the A.R.T./NY Theatres