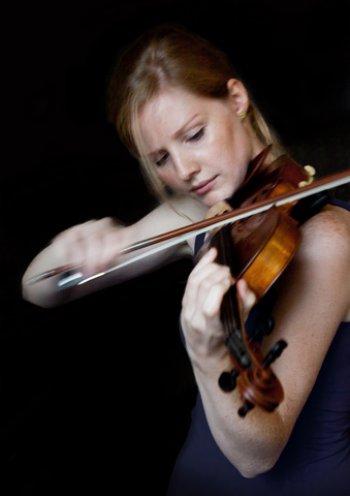 Dutch violinist Tosca Opdam’s Carnegie Hall’s Weill Recital Hall debut was marvelous. In a program of great intelligence centered around the theme of ‘home,’ Opdam played familiar works by Bach, Korngold, Debussy and Prokofiev together with a world premiere by Robin de Raaff, with luminous elegance, dynamic expressive range and a graceful spirit of invitation.

In each piece, Opdam played with versatile and accomplished pianist Victor Stanislavsky. The two musicians worked well together – they were consistently alert to each other’s tempi and emphases  – and there was no sense in which Stanislavsky was merely an accompanist, but Opdam was the lovely star.

Opdam opened with Bach’s Sonata for Violin and Harpsichord in E Major. It was a wonderful way to begin. Opdam’s Bach was confident and fresh: as she made her way through the slow-fast-slow-fast pattern of four movements, she revealed Bach’s inventiveness – his genius – as something completely new at each turn.

Selections from the 1920 Much Ado About Nothing Suite by Erich Wolfgang Korngold followed. This ten-minute offering – played both deftly and dramatically by Opdam and Stanislavsky – was lovely: it successfully captured both Shakespeare’s sensuous and charming sense of fun and his ability to use even comedy to depict all aspects of being human. Fitting into Opdam’s chosen theme of ‘home,’ the Suite successfully merged different geographies and aesthetics, Hollywood’s experimental film industry and Europe’s historied musical traditions.

Debussy’s Violin Sonata, composed in 1917, closed the first half of the program. Opdam shone in her presentation of this lush late Romantic piece, a bridge between Europe’s familiar geographies and the imminent dislocations of the First World War. 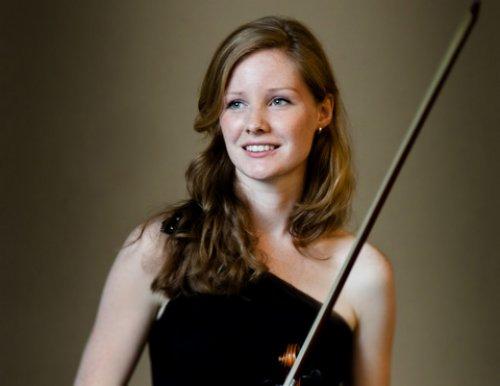 After the intermission, Opdam and Stanislavsky presented the world premiere of Robin de Raaff’s North Atlantic Light for Violin and Piano. More accurately: the fascinating draft of Robin de Raaff’s fuller North Atlantic Light still to come.  In 2019, Opdam will premiere de Raaff’s Violin Concerto No. 2, North Atlantic Light, with the Netherlands Philharmonic Orchestra led by Marc Albrecht, at Amsterdam’s Royal Concertgebouw. In this concert’s violin-and-piano version, the writing for violin was more fully and masterfully developed than the writing for piano, which felt, not inaccurately, like a rehearsal accompaniment; not surprisingly, Stanislavsky’s playing was weaker here than in any other piece.

Opdam’s de Raaff playing, in contrast, was marvelous. The composer took his inspiration from Willem de Kooning’s 1977 painting, North Atlantic Light. De Raaff and Opdam both captured the drama and movement of both white spaces and high-energy brush strokes in de Kooning’s painting. The inclusion of a tossed-about boat in the center of the painting evokes a sense of floating in simultaneous, coexisting, sea-and-sky pairings; in the middle of de Raaff’s 14-minute piece, a gentle central section of quasi-contemplative calm summoned up the feel of the boat’s suspension.

Most of the piece, however, explored dynamics of speed, swift turns and silence fragments; Opdam successfully presented the score’s electric-fast jumps among deep, rich notes to airily and impossibly thin, high ones. This piece felt less about ‘home’ than about movement and questing, a crisscrossed traveling among the different locations of various meanings.

The composer was in the audience; he, Opdam and Stanislavsky received the audience’s applause with happy smiles. Many in the golden intimacy of Weill Hall whispered hopes that they might be able to travel to the Concertgebouw for the orchestra version of North Atlantic Light next year.

The last listed piece on the program was Sergei Prokofiev’s Violin Sonata No. 2, written in 1943. From the work’s opening intensity of longing through folk-tune whirlwinds and on to the gripping, monumental grandeur of its conclusion, Opdam played with elegant command. 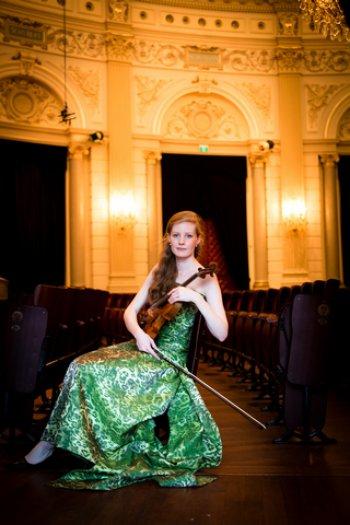 The audience offered enthusiastic applause, and was then rewarded with an entirely charming four-minute encore, a graceful miniature of sweet lyricism and sensuality by Dutch composer Henriette Bosmans (1895-1952).  Opdam announced the selection from the stage and played it from memory. It was like the final sparkle in a program that took us from California to the Urals, with the Dutch seashore and all of Europe in between, from the eighteenth century to the present moment, from pristine delicacy to vigorous, high-energy control.

Opdam has a keenly developed sense of performance: for her, a concert involves more than “just” the music. It is an experience that has many artistic facets.

In the second half of the program, Opdam wore a dramatic haute couture gown, created for her by Dutch designer Paul Schulten. Sleeveless, with a seamless blue bodice, a voluminous green skirt and train of satin de chaise, and a vibrant red petticoat that provocatively flashed out only when Opdam walked on stage and when she curtsied at the end, the stunning dress was inspired by the Willem de Kooning painting; Schulten remarked in the program notes that his goal was to ensure that “violinist and attire are one in waves and movement.”

The designer of the concert’s first dress – a sleeveless column of pale pink with an overlay of silver floral and tendril embroidery – wasn’t mentioned; this omission is unfortunate, as the first dress matched the Bach, Korngold and Debussy as well as the Schulten gown matched the de Raaff, Prokofiev and Bosmans.

One quibble with Opdam’s presentation of her concert as a multidimensional historical and artistic experience: because such explicit reference to de Kooning’s North Atlantic Light as the inspiration for both de Raaff and Schulten was highlighted in the program notes, a reproduction of the painting in the program would have enriched the evening for any audience members who hadn’t looked up the painting before arriving at West 57th Street.

This was a brilliant and wonderful musical evening, a splendid and memorable Carnegie-Weill debut by a violinist whose musical intelligence and expressive clarity make for a distinctive and gorgeous artistry.