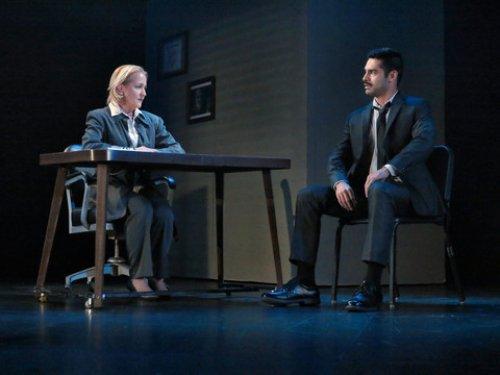 Although the late Bernard Pomerance is best known for The Elephant Man, he did write other plays. What apparently is his last play, Spin Off is being given its world premiere in a production directed by Ron Canada for Creative Women New York at The Riverside Theatre. Heavily inspired by Pirandello’s Six Characters in Search of an Author as well as Sartre’s No Exit, Spin Off is both a satire of network television police dramas and a condemnation of stereotyping in media. Unfortunately, while the theme is a valid one, the play endlessly repeats itself three and four times, while the audience gets the point long before the play reaches its conclusion.

When the play begins, we are in what seems to be the office of Dr. Chloe Allen, a police psychiatrist, investigating the first shooting by NYPD Detective Jimmy Marks, who insists he is Chicano despite his name, and that he had no personal animosity against Hispanics. Marks has shot a Puerto Rican prostitute Rosie Ramirez, well known to the department, who was pistol whipping an old lady and waving a gun at the officer. However, Marks memory of the event is fuzzy. When Rosie, supposed shot, appears things become surreal. She reveals that they are really characters in a network police drama which has been canceled and the reason Marks can’t recall things like his birthdate is that he doesn’t have one as the writers never created one.

Rosie suggests that they both dig deep and try to get beyond the stereotyping of their characters to find out who they really are. When they do, their true identities clash with their television counterparts. Finally, they decide to confront the head of the network to both survive and to exit from the confining television studio which will not allow them to display their true identities. However, none of the stereotyping or racism is revelatory or surprising as we have all noticed it previously. 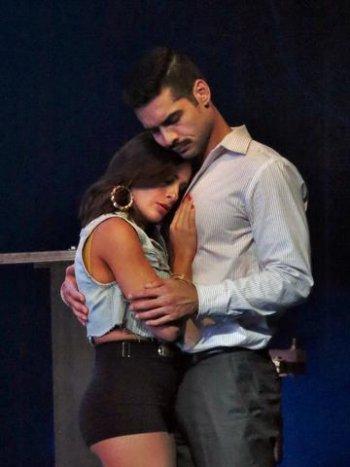 In the first act, the play toys with the notions of racism, stereotyping, identity and memory. In the second act which picks up from where the first act ended, Rosie has an extended monologue about her friend Yara which brings up the topics of terrorism, torture and tyranny. Although these are all explosive and important themes, the play’s surrealism and endless repetitions (almost everything is said four times) undercuts any possible drama. Ultimately, the play is an extremely talky affair, unlike the dramatic action shows of producer Steven Bochco such as NYPD Blue which inspired the play. At this late date, the Pirandello and Sartre elements seem both hackneyed and simply devices to keep the play going past the audience’s endurance.

Considering the repetitiveness of the material and the fancifulness of the play, Megan McQueen as Rosie Ramirez and Kevin Rico Angulo as Det. Jimmy Marks make a great deal more of their characters than is in the writing, while the rest of the actors in underwritten roles do quite a bit less. Both attractive performers, they make us care about their characters though not much is happening. It is to be hoped that they find more substantial roles soon that will showcase their talents.

Tricia Mancuso Parks as Dr. Allen is at first all business and efficiency and then is expected to become part of the surrealism when she chooses a new life once she knows the show has been canceled. Chad Restum as the TV Executive can do little with his cliché-ridden role, while Thomas Hildreth as his bodyguard and executioner of the characters that are no longer needed is not given much to do. In the silent, pantomimed role of Yara, Najla Said is fine in her movements but adds little to the development of the plot (such as there is one). 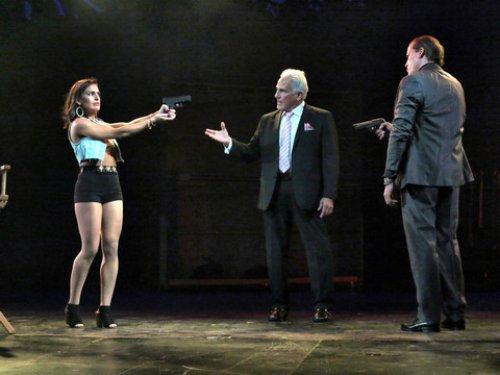 Megan McQueen, Chad Restum and Thomas Hildreth in in a scene from Bernard Pomerance’s “Spin Off” (Photo credit: Jonathan Slaff)

Making the play more surreal than necessary on the almost empty stage, director Ron Canada fails to bring the cardboard characters to life and the minimalist staging does not help to ground the play in a reality. Although the actors speak quickly, the pace seems slow as so much is repeated, often immediately after being said. A good deal of judicious editing would help greatly.

So too Paul Smithyman’s bland scenic design never suggests a television studio set and the emptiness of the stage only exacerbates the vagueness and vacuousness of the play. The costumes by Matsy Stinson are conventional and unsurprising for these people. David Shocket’s murky lighting suggests that the characters are in limbo, without adding any atmosphere to the set. Anthony Escoto’s videography for Yara’s story is graphic yet surreal, but rather extraneous to the thrust of the play.

Unlike the tightness and highly structured nature of The Elephant Man, Bernard Pomerance’s last play Spin Off is diffuse, overwritten and talky. While the theme of stereotyping in network television is a real issue, Spin Off neither delves deeply nor convincingly into its subject matter. The performances are persuasive but the continued repetition of the same lines keeps the play from being either dramatic or satiric.

The Riverside Theatre, 91 Claremont Avenue between 121St and 122nd Street, in Manhattan