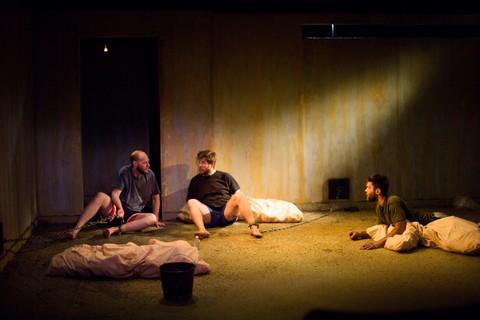 Michael Broadhurst, Jonathan Judge-Russo and Leif Steinert in a scene from the Animus Theatre Company’s revival of Frank McGuinness’ “Someone Who’ll Watch Over Me” (Photo credit: Haley Thorpe Photography)

An Englishman, an Irishman and an American are each shackled by one of their feet to a wall of a filthy basement in 1980’s war-torn Beirut in this graceful revival of playwright Frank McGuinness’ 1992 hostage drama Someone Who’ll Watch Over Me. The No Exit and Waiting for Godot elements are freshened by Mr. McGuinness’ command of engaging dialogue conveying the universal theme of survival under horrendous circumstances with humor coexisting with despair.

Structurally the play is difficult as the first act is a languid 90 minutes, there’s an intermission and then a tauter second act of 60 minutes. By having the audience spend close to three hours in a theater watching three men talk, perhaps McGuinness desires them to feel detained as well. 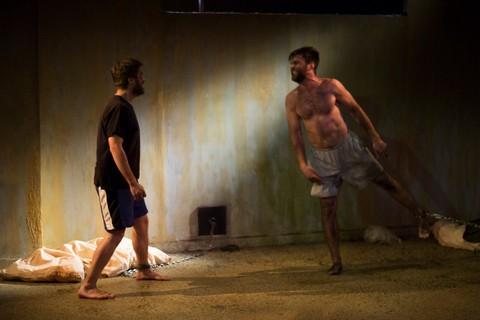 Jonathan Judge-Russo and Leif Steinert in a scene from “Someone Who’ll Watch Over Me” (Photo credit: Haley Thorpe Photography)

The captors are unseen, the political conflicts are barely referred to, scant strategic biographical details are imparted, and the short scenes connote the passage of indeterminate time. Despite these vagaries, McGuinness creates three fully-realized engaging characters whose initially contentious relationship develops into a moving bond. The English Michael is a teacher who feuds with the Irish reporter Edward while the American doctor Adam thoughtfully interacts. Each has been randomly taken away, dramatizing the real-life commonality of the era.

This production is presented by Animus Theatre Company, “a family of artists committed to telling stories about the resilience of the human spirit…” Their choice here is appropriate and their treatment of it is superior particularly the flawless cast of bearded actors.

As Michael, the soulful and animated Michael Broadhurst enthralls as he rhapsodizes about his deceased wife, philosophically opines and stalwartly copes. Jonathan Judge-Russo has shattering moments as Edward as he volcanically comes undone while otherwise exhibiting quiet force throughout. With his boyish twang and haunted eyes, Leif Steinert’s Adam is thoroughly charming. Separately and together, each of them achieves the right balance of comedy and pathos that the piece requires. 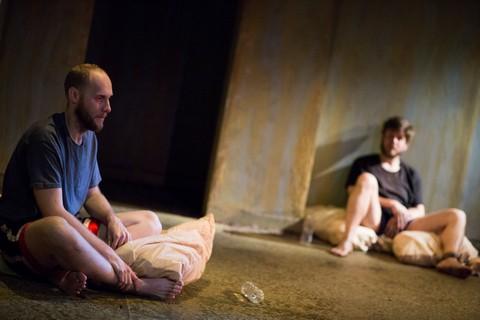 Michael Broadhurst and Jonathan Judge-Russo in a scene from “Someone Who’ll Watch Over Me” (Photo credit: Haley Thorpe Photography)

For a three men chained up in a room setup, director Alan Langdon manages to craft a panorama of visual variety with his minute staging that resists inertia. Most crucially, Mr. Langdon guides the performers to sustained emotional intensity.

Gray walls streaked with rust, grimy mattresses on an earth-strewn floor and a bucket are used by scenic designer Scott Tedmon-Jones to create a mesmerizing confined environment. This is exquisitely complemented by Joyce Liao’s shadowy muted lighting design. Bits of Ella Fitzgerald’s recording of “Someone Who’ll Watch Over Me” and Islamic prayers are skillfully rendered by sound designer Tye Hunt Fitzgerald during scene transitions. The T-shirts and gym shorts selected by costume designer Stephanie Shaw colorfully individualize each character as per the author’s stage directions.

Following its London premiere, Someone Who’ll Watch Over Me opened on Broadway on November 23, 1992, ran for 232 performances and was nominated for the Tony Award for Best Play. This inspired incarnation reveals it to be demanding, highly rewarding and timeless in light of perpetual world-wide political discord.