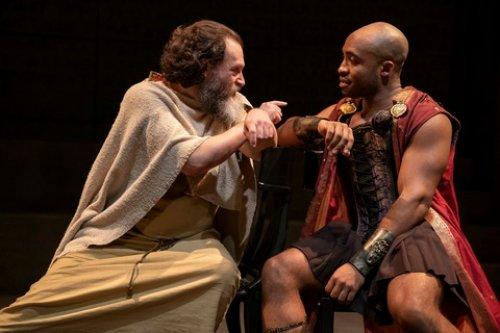 Michael Stuhlbarg as Socrates and Austin Smith as Alcibiades in a scene from Tim Blake Nelson’s “Socrates” at The Public Theater) (Photo credit: Joan Marcus)

For all you philosophy junkies out there—and you know who you are—Tim Blake Nelson’s world premiere Socrates at The Public Theater, the shining light of The Public’s Onassis Festival, is a treasure trove of ideas bantered, tossed, shredded and otherwise analyzed by a stage-full of ancient Greeks, led by the title character played with dignity and passion by the phenomenal Michael Stuhlbarg (the father in the film Call Me By Your Name) and a cast of 16 mostly playing multiple roles.

Though long and staged by Doug Hughes in staid tableaux, Socrates is hypnotically fascinating in its steady march toward its tragic denouement.

In an introductory scene, Plato (Teagle F. Bougere, solid), from the vantage of years, relates the tale of Socrates’ last months to a Boy (a bland Niall Cunningham), a newcomer to Athens who has negatively prejudged the city state’s morality for damning Socrates, calling the populous “murderous.”  Plato, whose writings are the main source of our knowledge of Socrates’ life, decides to relate his mentor’s story. 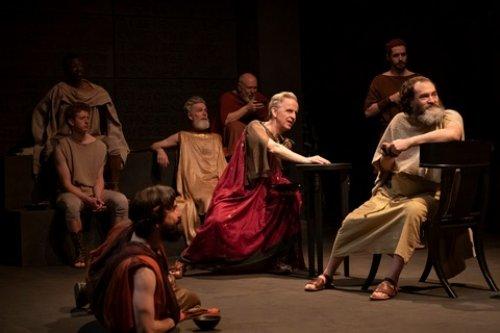 The scene shifts to Athens after the Peloponnesian Wars, a city still on edge from the loss of its entire fleet to their enemy, the Spartans in sea battles near Sicily.  More than 50,000 Athenian men were lost and the body politic in democratic Athens is growing more and more paranoid and sensitive to any dissent.

In the center of them all is the quietly observing Socrates who seems content to eat, drink and listen, except when the men gently chide him for his keen interest in beautiful young men.  It becomes clear that this Socrates is a ghostly figure they remember with fondness and sadness. 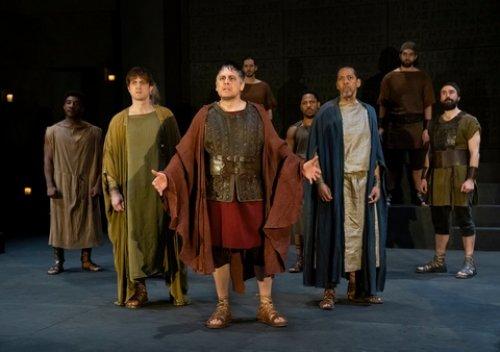 This colloquy tells us much about Socrates and the tense, but brilliant world he lived in, setting the scene for the drama to follow.

The harrowing second part drives home the weaknesses of Athens’ so-called democracy when a mob, led by the demonic Anytus accuses Socrates of corrupting the morals of the youth of Athens and for being a nonbeliever in the gods that hover over Greece, all trumped-up charges which he doesn’t fight, preferring to let his comrades answer for him.

Socrates is confronted by his long-suffering wife, Xanthippe, played by Miriam A. Hyman who soars in a small role, bouncing from anger to pain with wit and infinite, if challenged, patience.  She reveals that Socrates was a poor provider and an absent influence on his two sons. 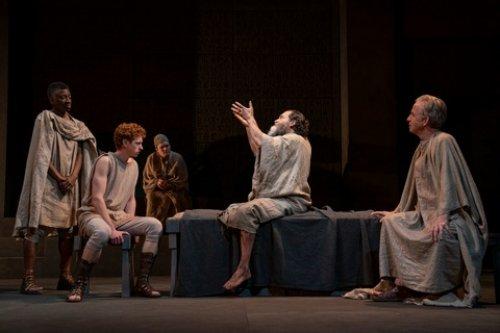 Nelson doesn’t shy away from portraying Socrates’ awful fate.  Stuhlbarg is incredibly moving in his final moments as his friends and enemies hover over him.  He brings the play to its dramatic conclusion.

Nelson and Hughes are helped immeasurably by Scott Pask’s brilliant set and Catherine Zuber’s period and character perfect costumes.  Pask turns the stage of the Martinson Theater into a simple space with benches allowing for the discussion of ideas.  His crowning touch is lining the walls of the stage and the aisles of the theater with stone-like sections that contain, in carved ancient Greek, the funeral oration of Athenian general Pericles delivered around 430 B.C.  The audience and actors are surrounded by the language of Socrates.

Tyler Micoleau’s inventive lighting gives the actors varied ambiances in which to work, especially when they were just standing about observing and spouting words.

Socrates left me with just one question.  Does the Boy eventually become Plato’s famous student Aristotle?

Running time:  two hours and 45 minutes including one intermission