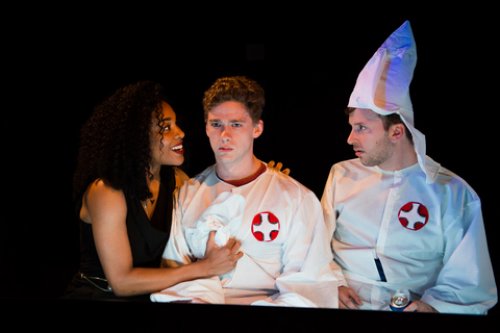 The Flea Theater is honoring one of its co-founding members, playwright Mac Wellman, with a five play festival called “Perfect Catastrophes” which includes two world premieres and three revivals, with casts made up of The Bats, The Flea’s youthful resident company. First up are the one-act plays, Sincerity Forever and Bad Penny, which require separate admissions but can be seen back to back on the same evening or afternoon. Any two of the plays in this festival are an immersive view of the avant-garde playwright who has created new works for almost 50 years and has won three Obie Awards.

From the evidence of the 1990 Sincerity Forever and 1989 Bad Penny, Wellman is not particularly interested in plot but makes copious use of satire, poetry and symbolism to write absurdist plays which skewer hypocrisy and pretense in America. Sincerity Forever concerns the fictional Southern town of Hillsbottom, a community with a prominent contingent of young Ku Klux Klan members, where the teenagers hang out on peaceful evenings with their friends and lovers and question their beliefs, things they have been taught, and particularly those things which they find to be insincere. Two furballs have been sighted from the tribes of Abaddon and Belial, apparently a representation of sin or depravity, or simply outside forces opposed to their emphasis on respectability. When Jesus H. Christ shows up in the form a young black woman they not only do not recognize her, they are subjected by her to a rant on their own insincerity and self-righteousness.

Facetiously dedicated to racist conservative Senator Jesse Helms for “the fine job you are doing of destroying civil liberties in These States,” the play which is mildly satiric and mildly amusing today repeats itself over and over, sometimes in the identical words, in conversations by seven pairs of couples seated in cars, debating their sincerity and belief, but continually revealing their ignorance. If one reads the program in advance, one is aware that Amber Jaunai plays Jesus H. Christ, but this character does not reveal her identity to the audience until the eighth and final scene when she also states, “America, I got nothing to say to you.” Dina Vovsi’s minimalist production leaves most of the work to the series of duologues and only contains set designer Frank J. Oliva’s suggestion of the parking lot behind a store. 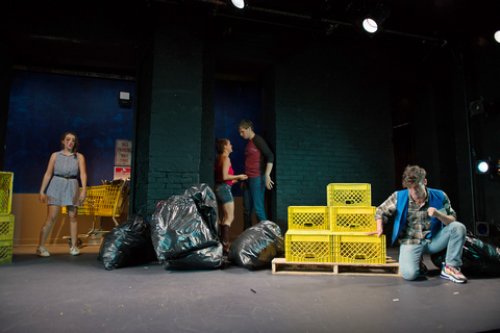 The initial shock of all the young people in Ku Klux Klan hoods and sheets wears off as it is never referenced in the play by any of the characters, who eventually take them off to reveal underneath that they wear designer Barbara Erin Delo’s casual sportswear. Vovsi eschews the original stage direction of having Jesus H. Christ address the young people sitting at her feet and instead has her address the audience which surprisingly does not work as well.

Bad Penny is a totally different experience which also deals with human pretense, hypocrisy and fears in modern life. Originally written to take place at the Bow Bridge in Central Park with one actor on a rock in the middle of the lake, Kristan Seemel’s production is the first to take place in the outdoor courtyard of The Flea’s Pete Theater. A park-like atmosphere has been created by designer Jian Jung by using Astroturf, folding chairs, mats, and a wooden picnic table, as well as strings of overhead lights from designer Daisy Long. The audience picks their own seats around the four walls of the courtyard and when the play begins they discover that the actors have been seated among them.

Originally performed with a cast of 17 including a chorus of 12, Seemel’s production in this smaller space has a cast of nine with a chorus of three. In language partly poetic and partly opaque, a woman named Kat, a native New Yorker,  rises from the center of the space and begins telling us that she comes to the park daily and begins a rhapsody about the sky, later telling us that she has had mental problems. She addresses a man who later introduced himself as Ray X who is carrying a tire. 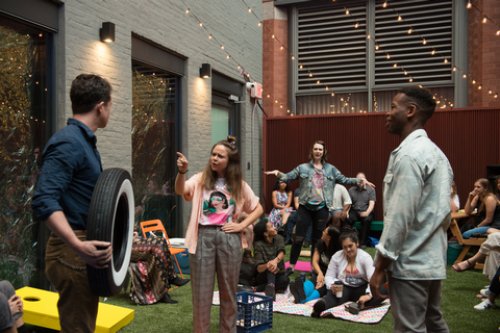 First he tells her to leave him alone but then he reveals his story: he is “a freelance memory fabulist and metaphysician and card player” from Big Ugly, Montana, where he was a football player on the high school team. His Ford Fairlane 500 has broken down at 69th Street, between Lexington and Park, but as he couldn’t find a gas station on the east side to fix his flat tire, he is crossing Central Park in order to find one on the west side.

Then other characters rise from the audience in various places and add their two cents. In typical New York fashion, a second man chimes in that Ford stopped making the Ford Fairlane years ago and that there are visibly gas stations on the east side. A third man pipes up that it is not possible for someone to have torn off the wheel from his car without a jack and tells the first man to get himself out of the park and get a job. A second woman criticizes the second man saying that he has no right to criticize Ray X and what is he doing lounging in the park at this hour and not at his job.

At this point, Kat reveals that it is all the fault of the bad penny that she picked by the fountain at which point the chorus reveals that the Dead Boatman of Bow Bridge is coming to take the thief to hell, shades of Charon, the ferryman of Hades who rowed the souls of the decease to Hades in Greek mythology. While the others talk of the problems of modern life, the Boatman of Bow Bridge silently appears and the story plays out to its inevitable conclusion. 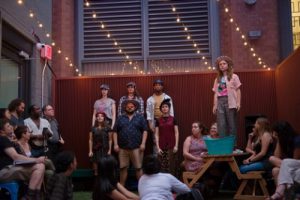 The cast of The Bats is quite playful as these characters defending and criticizing each other in turn, without going too deeply into their roles. As Kat, Emma Orme is quite whimsical, while Lambert Tamin (subbing for Joseph Huffman) as Ray X at first seems threatening, but later calms down and tells his story. Alex J. Moreno and Marcus Jones (subbing for Tamin) and Baille de Lacy as the other speakers create very different denizens of the park. As the chorus, Caroline Banks, Dana Placentra and Katelyn Sabet offer a mythic element to the park speaking their prophetic lines in unison from various positions. The staging of the appearance of the Boatman (played silently by Ryan Wesley Stinnett) is diminished by the fact that he only appears behind a glass wall in a very strange costume seemingly made up of found objects and we never see him with a boat or see him remove his victim.

Mac Wellman is famous for non-linear, absurdist plays which take America to task for it commercialism and lack of soul. Sincerity Forever and Bad Penny which open “Mac Wellman: Perfect Catastrophes,” the five-play festival in his honor are perfect exemplars of his famous style and content. However, as this is nontraditional theater it will not be for all theatergoers.

The Flea Theater, 20 Thomas Street, between Church Street and Broadway, Tribeca, in Manhattan

Running time: Sincerity Forever (one hour and 15 minutes without an

Bad Penny: (50 minutes without an intermission)