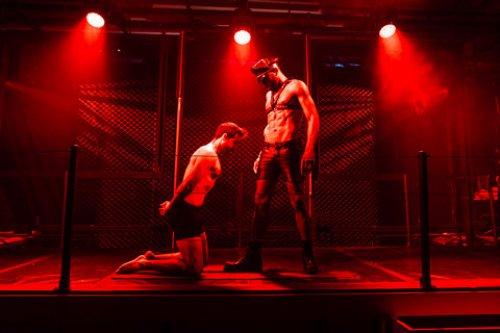 “It’s a restaurant, Lauren, not a not a fetish club!”

Mr. Asher here continues to mine the subject of human sexuality, but lightning has not struck twice. That is chiefly due to Asher’s misguidedly grandiose direction (with associate director Mika Kauffman) emphasizing stylish spectacle at the expense of the clunky plot. It also slows down the numerous scene transitions. One ends, there’s dragged-out showy lighting and loud music, characters often walk around and then finally it’s on to the next scene.

A lot of effort has been expended on rows of lights all over the place that change color.  The spacious theater has been configured to include upper playing levels that wrap around. There’s overdone music and bracing, often red-hued lighting perpetually overwhelming a psychological exploration that takes place in two apartments. We’re physically distant from the characters which adds detachment from them as well. The main problem is the flawed writing.

At a building in Manhattan Chelsea’s neighborhood, we meet two couples. Lauren is a 31-year-old African-American woman married to Micah, a 31-year-old Caucasian man. They met in high school and both later went to the Culinary Institute of America. After they jointly opened an eventually successful restaurant, Lauren decided to stop cooking and now works as a customer service specialist for a tech company while Micah is the chef and runs the restaurant. Lauren comes in contact with their loquacious neighbor, the Jewish 29-year-old Chris, a genderqueer nurse practitioner whose partner of seven years is the 33-year-old Jewish African-American Xavier who has had a long career as a professional dominant. He verbally and physically abuses men for $300 an hour in his prop-strewn dungeon which conjoins Chris’ apartment. Did you get all of this? The first hour of the 100 minutes is heavy on exposition. 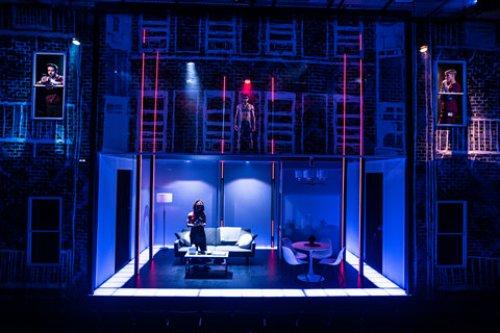 Asher’s stage directions specify his characters’ races, sexual orientations and ages, but the coincidental multiracial angle of the relationships goes unremarked on. Apart from hamstringing the casting of the play, there’s no integral reason for such absolute characteristics.

Lauren arranges a dinner party for the two couples after befriending Chris. There’s tension which is understandable because we later learn Micah has been having weekly two-hour sadomasochistic sessions with Xavier for the past three years!

It is made clear that Micah is not attracted to men and that there’s no sex involved. He craves degradation from a stranger in a controlled environment. Asher tosses off that the two communicated via a kink website but there’s never a full-fledged analysis of what drives Micah to such outrageous lengths. There is a choppy confession of being stressed out and that he believes that these activities will strengthen him and save his strained marriage.

This type of material has been vividly rendered in European films such as Barbet Schroeder’s Maîtresse (1975) and Michael Haneke’s The Piano Teacher (2001). The Showtime series Billions features a main character who is matter-of-factly a submissive. These works offer far more insight, depth and allure than safeword. Of course, there’s also Jean Genet’s The Balcony (1957) with its pillars of society figures’ shenanigans at a brothel.

Micah’s compulsion is the potentially intriguing core of this lamely constructed play. However, it is embedded in this shaky treatment that comes across as a sitcom with shades of Rosemary’s Baby and No Sex Please, We’re British. The old chestnut of a nice young couple menaced by seemingly well-meaning neighbors yarn oddly plays out in this overblown production. Besides being aghast when finding all of this out, Lauren is taken aback by the cost of it. Her loving attempt to fulfill Micah’s needs is demonstrated when she tries spanking him with a kitchen spatula. This act is meant to be eerie but becomes comical. 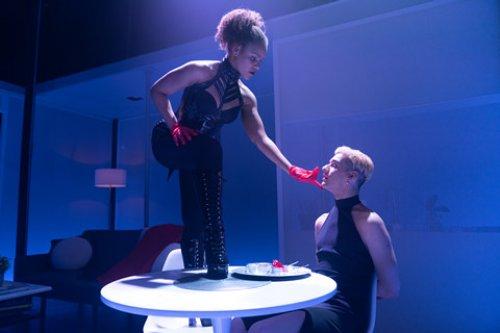 With their cheery speech patterns, animated presence and passionate sincerity, Maybe Burke is outstanding as Chris. Whether glowering or anguished, Joe Chisholm as Micah makes the most of this underdeveloped pivotal role with his appealing everyman qualities. The quietly charismatic Jimmy Brooks is a believable and sympathetic Xavier. Traci Elaine Lee is delightfully plucky as Lauren. Ms. Lee’s extensive background in regional theater musicals is evidenced by her rich vocal tones and relaxed manner. That serves her well when she has to parade around in dominatrix gear for what is intended as a serious turning point but is instead laughable. Lee confidently sails on.

The technical elements are all accomplished but crush the piece’s intimacy. Ann Beyersdorfer’s epic scenic design would be suitable for Greek tragedy or A View from the Bridge. Painted scrims indicate a metropolis engulfing the residences with their gray, black and white decor and ominous playroom on an upper level. The S&M recreations are so far away from the audience that they’re uninvolving.

A safeword is a prearranged term spoken by a submissive to signal that their pain threshold for an activity has been reached and for it to cease. Though safeword.’s promising premise is frustratingly realized it does impart pertinent facts.