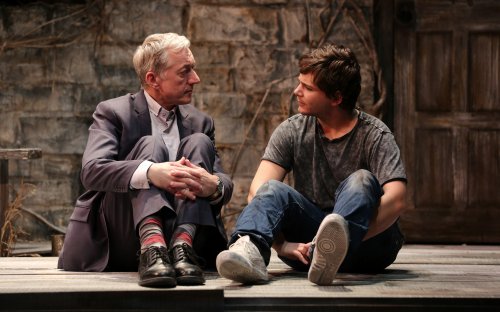 Sean Gormley and Robert Simonian in a scene from “Jonah and Otto” (Photo credit: Davidawa Photography)

Although Robert Holman has been a much produced playwright in Britain since 1972, he is only now having his first New York production with the U.S. premiere of his 2008 Jonah and Otto. Famous enough in Britain to be counted among the influences on such playwrights as Simon Stephens and David Eldridge, he has previously been staged in the U.S. in Chicago and Los Angeles. Geraldine Hughes’ production now at the Lion Theatre on Theatre Row may demonstrate why more of his plays have not been seen here.

In the current play, two very different men meet in a walled garden in a seaside town on the south coast of England. Jonah is 26 and pushing a grocery cart which contains an unseen baby. He is dressed casually but shabbily. Otto, aged 62, has lived for 18 years in this community. He is dressed in a suit and white shirt. Otto assumes that Jonah who he does not recognize is a hooligan and Jonah does ask him for money. In the course of a single day, the two men get to know each other through a series of conversations. They discuss love, loss, faith or the lack of it, painful memories, identity and regrets.

In the course of the day it is revealed that Otto is a clergyman (or is he?) Jonah has the day to kill before taking a ferry to France. Otto has four adult daughters but no son which he seems to regret. His relationship with his daughers (like his relationship with his God) is distant. He talks of many affairs but it seems they are mainly in thought only. Jonah claims to be a magician and does a few remarkable tricks. He is also to some extent a con artist. He is definitely an epileptic as we witness more than one attack. By the end of the day, the two men have grudgingly become friends though they will probably never meet again.

While the play is at times Pinteresque, it is talky in a way Pinter never is, explaining everything over and over, covering the same ground again and again. Nothing much happens other than that the men become more confiding and reveal more of their personal pasts. The play implies that Jonah is menacing, but under Hughes’ direction, he never seems much of a threat. The pace is slow and methodical, too slow for its own good. Sean Gormley’s Otto and Rupert Simonian’s Jonah are well-rounded characters but the acting style is too refined, too genteel to make much impression. 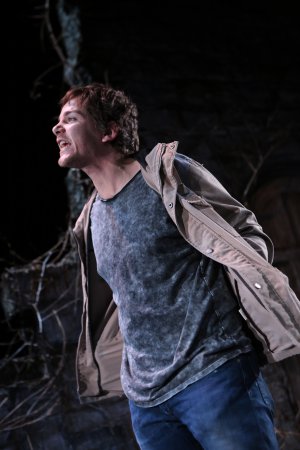 Robert Simonian in a scene from “Jonah and Otto” (Photo credit: Davidawa Photography)

Should we be afraid for Otto’s safety? Is Jonah hiding something or on the run? Is Otto really a clergyman or is it all in his past? We never know for certain. The tone is philosophic but the pronouncements like “I think we learn to love by loving, by listening to another person. Love is paying attention.” are not really very deep or better than pop psychology.

Although the published script speaks of several locales in the town where Jonah and Otto keep running into each other, set designer Ann Beyersdorfer has set the play in only the walled garden which looks like it might be on the church property, but we never find out. It is poetically realistic, rather like the play. The lighting by Kate Bashore never makes it clear what time it is or how much time has passed. Are the men seeking each other out in some need for solace or is all the action consecutive though presented in five separate scenes? Katie Sue Nicklos’ costumes do not make clear the social class differences between the men other than that one is in sports clothes and one is conservatively dressed, which also adds to the confusion.

Robert Holman’s Jonah and Otto is an accomplished piece of work that may not have been given the production that it deserves. Wordy and long-winded, plotless and meandering, the play deals with typical Holman preoccupations (meetings between strangers, intergenerational relationships and dysfunctional families) but does not seem to achieve any new ground by its conclusion. Don’t blame Sean Gormley or Robert Simonian who do the best with what they have been given.