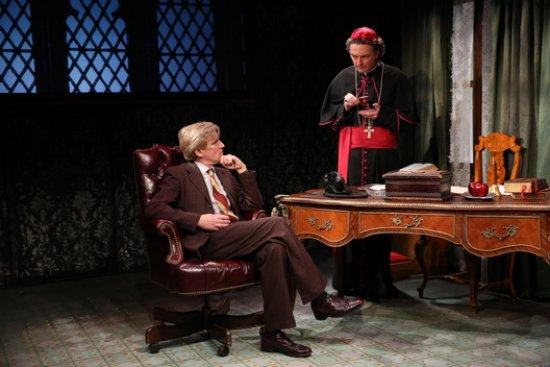 Patrick Fitzgerald and John Keating in a scene from “Rebel in the Soul” (Photo credit: Carol Rosegg)

Though it concerns church-and-state matters that actually occurred in Ireland more than half-a-century ago, Rebel in the Soul seems very timely and germane to today–with “people…calling out for decent health care” then, as now. And although there are only four characters–each of whom has been based on a real person–the play that contains them is a large play, with even larger ideas. As written by Larry Kirwan, there is a good deal of exposition to help us get a sense of their complicated backgrounds before bringing us to a special moment.

As it combines Gregorian chants with more modern sounds, the music (sound design by M. Florian Staab) helps set the stage, when we’re introduced to Dr. Noel Browne. While he explains that he’s the Minister for Health “of this sovereign Irish state,” Dr. Browne also tells us that he’s waiting to see His Lordship John Charles McQuaid, Archbishop of Dublin–a “formidable” man–which is the special moment that the play spends far too much time leading up to.

As played with a certain amount of clumsy volatility by Patrick Fitzgerald, Browne also backs up to tell us about his childhood, which is a story straight out of Charles Dickens. Given his political success to follow, Browne’s “pauper” roots and the “brutal world” he eventually escaped from becomes a badge of honor, for him. They include the death of his father from tuberculosis, when Browne was only ten. “Even worse,” he adds, “we had all been silently infected.” Indeed, his mother dies soon thereafter of the ailment that Browne himself now has–underscored by Fitzgerald’s coughing on cue, throughout the performance. 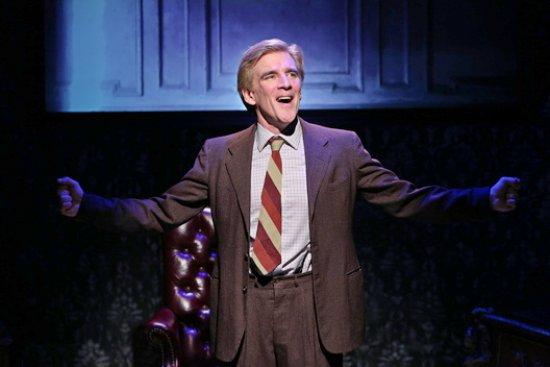 Patrick Fitzgerald in a scene from “Rebel in the Soul” (Photo credit: Carol Rosegg)

It’s rather from director Charlotte Moore’s all-important program note that we learn about Browne’s “Mother and Child Healthcare Scheme,” which in Catholic Ireland in 1951–when the play is set–was an absurd plan to try and execute. Though it was apparently a “Tuberculosis crusade” that got Browne installed as Health Minister, he switched his focus to “maternity and family issues,” and this is where Browne’s pivotal meeting with Archbishop McQuaid enters the story. It’s also the be-all and end-all of the play, a smart play about smart men trying to outsmart each other to get what they want. It’s quite a coincidence to have seen the new, stunning revival of The Little Foxes on Broadway so soon after seeing Rebel in the Soul, since the characters in each play prove remarkably similar in their scheming behavior, albeit with very different motives.

Before we even meet McQuaid, we’re introduced to Sean MacBride, the leader of Browne’s party, to whom he turns for help in negotiating his upcoming meeting with the Archbishop. An ex-IRA chief, MacBride is a fierce and crucial ally for Browne. He’s also a shrewd operator, who, while seeking “a free and united Ireland,” recognizes himself in Browne who he helps into the ranks of public service. “Oh yes, I made all Browne’s mistakes,” he tells us when we first meet him. “I too was once all blinding principle unsullied by even an iota of pragmatism.” However, unlike himself, who grew out of such idealism, MacBride has come to realize that Browne will “never see the forest for the trees.”

If this all sounds a bit over-intellectual, well, so is the play. Though the intelligent script may be based on real people, they are forever describing themselves–and each other–in ways that real people never do. Think about practically any play by George Bernard Shaw, and you begin to get the picture. (Archbishop McQuaid even says, “I do find political theory most compelling.”) And although Moore, as director, has done much to compensate for the tiny stage space on which the expansive story unfolds–particularly with helpful projections by Chris Kateff and a cramped but effective set by John McDermott–she isn’t abetted very much by her actors. 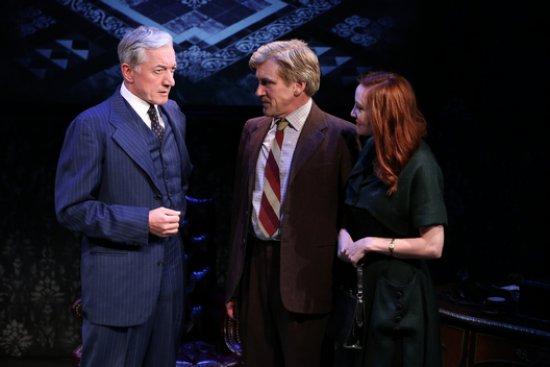 Sean Gormley, Patrick Fitzgerald and Sarah Street in a scene from “Rebel in the Soul” (Photo credit: Carol Rosegg)

Only John Keating comes through at etching an unmistakably knowing and upper-handed Archbishop McQuaid as he puts off seeing “the cantankerous Dr. Browne outside my door.” Keating’s McQuaid also says of Browne with utter conviction: “I fear he labors under the misapprehension that church and state should function as separate entities.” For his part, Browne rails against “the smothering theocracy that rules us now.”

It’s hard, in the end, to tell how much of Fitzgerald’s clumsiness as Browne was deliberate, and how much may have been due to his nervousness and his stumbling over some of his lines, during a preview performance. As MacBride, Sean Gormley never seems confident or suave enough–as his character is meant to be–rather restrained and dignified. And Sarah Street, as Browne’s wife Phyllis, seems to melt into the background, in what might be deemed a wistful characterization. The serviceable costumes and occasionally evocative lighting are respectively by Linda Fisher and Michael Gottlieb.