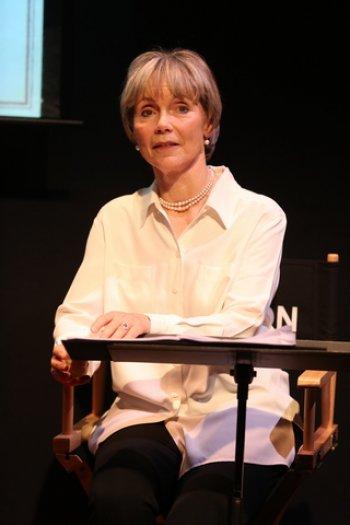 Lucy Fleming as Celia Johnson in a scene from “Posting Letters to the Moon” (Photo credit: Carol Rosegg)

The epistolary Posting Letters to the Moon may, on the face of it, make one think of A. R. Gurney’s Love Letters or Helene Hanff’s 84 Charing Cross Road. But unlike those two memorable plays, PLTTM as “compiled” by Lucy Fleming, whose mother was the British actress Celia Johnson and whose father Peter Fleming was a travel writer–as well as the older brother of James Bond creator, Ian Fleming–never really tells a story nor conveys what her parents’ relationship was like.

Fleming’s parents’ letters to each other were written during World War II (they span 1939 to 1945), when her mother was acting on the stage and her father was stationed in India.

The play’s curious title is taken from one of Johnson’s letters, when she writes that she’s not really sure how to address her letters to Fleming: “Just putting HQ South Pacific Command or whatever sounds so very trusting, like posting a letter to the moon.” But for the most part, the letters are really quite down to earth. 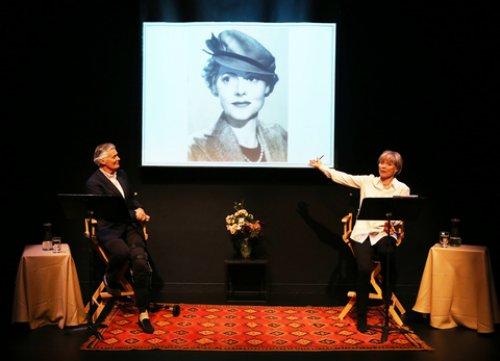 Simon Williams as Peter Fleming and Lucy Fleming as Celia Johnson in a scene from “Posting Letters to the Moon” (Photo credit: Carol Rosegg)

They’re also, as read here by Lucy Fleming (Johnson) and by her husband Simon Williams (Peter Fleming), set up with occasional narrative exposition, to help us know some of the background to what’s being said. Williams, for instance, tells us, “Early in the war, a camp had been built about a quarter of a mile from the house for use by Allied troops.” He also tells us that 1942 was the start of two “very different careers for Celia–that of film actress and that of Police-Woman.”

Indeed, Celia Johnson starred in three now classic pictures that were written by the great Noel Coward and directed by the great David Lean, early in his career, including their most successful collaboration, Brief Encounter. (Lean, of course, would go on to direct two of the most famous epic films of all time: Lawrence of Arabia and Doctor Zhivago.) About another of their collaborations, Johnson wrote that she had lunch with Lean, when he told her that In Which We Serve is “making a whale of a lot of money,” and would soon by opening in the States: “if they can get the censors to allow sailors to say ‘bastards.’” The year was 1942, and it demonstrates how far we’ve come, given what people tweet today on a regular basis. 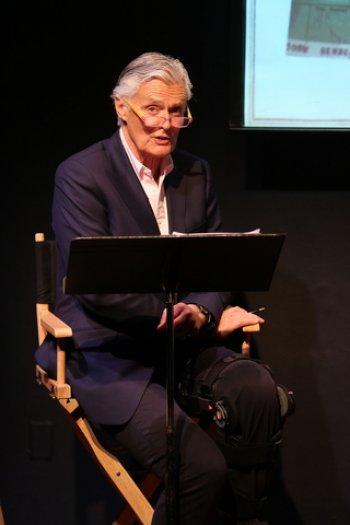 Simon Williams as Peter Fleming in a scene from “Posting Letters to the Moon” (Photo credit: Carol Rosegg)

Fleming both resembles and sounds like her mother and proves equally endearing, with nothing but a white blouse, black slacks, a pearl necklace and earrings. For his part, Williams arrives on stage with his leg in a brace, explaining that he broke it some weeks ago.

Though no one is credited in the program with any design elements, the simple stage in the small Theater C at 59E59 features two music stands, on which they perch their scripts, and two small tables, on which they perch waters for quenching their thirst. There are also numerous, relevant projections, and original music and sound which is credited–to Simon Slater.