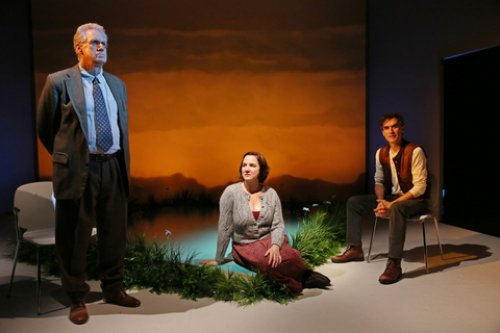 The cheery Molly Sweeney is 41 years old and became legally blind at the age of ten months. She can distinguish between lightness and darkness and sees shadows. Despite her caring neurotic mother’s pleas, her miserly judge father did not send her to a school for the blind. Molly works as a massage therapist at a health club. After a brief, giddy courtship of two years, she married one of her clients, the quirky idealistic Frank. Marketing beehives and a cheese business derived from Iranian goats have been among his offbeat and failed ventures.

In a quest to restore Molly’s sight, Frank prompts a visit to Mr. Rice. Rice is a once prominent ophthalmologist who is now tending to patients in rural Ballybeg. He has descended into whiskey-fueled despair following his wife leaving him for a colleague. He views an operation which only has a slight possibility of success as an opportunity to restore his vitality, salvage his life and restart his moribund career. Molly is content as she is, finding herself caught up with Frank’s need to achieve something and Rice’s yearning for redemption. Will she have the surgery, and if she does will it succeed? 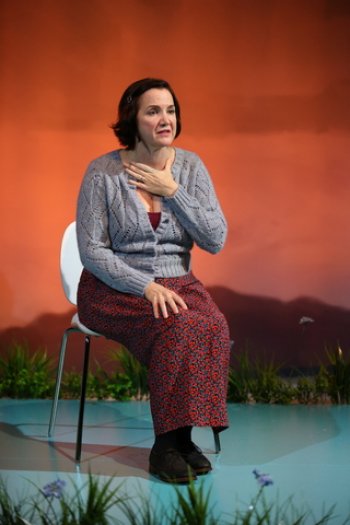 As is Mr. Friel’s The Faith Healer, Molly Sweeney is a monologue play. Here, instead of being separated in individual acts, the three characters appear on stage together without interacting, and speak alternately. It’s certainly a viable format and Mr. Friel gives us a gorgeous cascade of memories, biographical details, differing points of view and suspense. However, as beautiful as these reveries may be, there’s too much of them and the play’s impact is diluted.

Lasting two and a half hours and comprised of two acts with an intermission, the slender plot is embellished with the leisure of a literary work rather than a taut stage play.  Still, by its end, one is caught up by the characters and their fates. The arguable structural deficiencies are compensated for by the faultless presentation.

Faced with such a talky and static work, director Jonathan Silverstein nonetheless creates momentum with his industrious physical staging. Mr. Silverstein has the actors in a whirlwind of organic motion and strategic stillness. Their entrancing efforts are complemented by the superior technical elements. 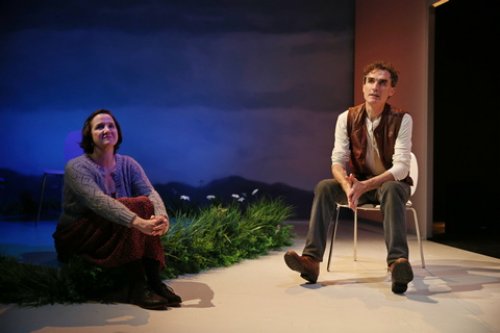 Molly is center stage on a slightly raised mound of grass and flowers. Rice and Frank are at either side of her seating or standing by white chairs. The backdrop is a photorealistic mountain and sky view. Scenic designer Steven Kemp’s airy modernistic simplicity is arresting. Anshuman Bhatia’s lighting design employs a variety of hues and textures which correspond to the moods and narrative shifts to great effect. Musical snippets and ambient tones are rendered by Fan Zhang’s subtly integral sound design. From the drab elegance of Rice’s suit to Molly’s scarlet ensemble topped by a gray sweater and Frank’s black jeans, white shirt and Bohemian vest, Jennifer Paar’s costume design is of individualized perfection.

Molly Sweeney premiered at Dublin’s Gate Theatre in 1994 starring Catherine Byrne as Molly. Ms. Byrne recreated the role in the play’s U.S. debut Off-Broadway presented by the Roundabout Theatre along with Jason Robards as Rice and Alfred Molina as Frank.

Textual issues aside, this incarnation realizes the piece’s humane sensibility with theatrical force, enabling it to be a moving and rewarding experience.