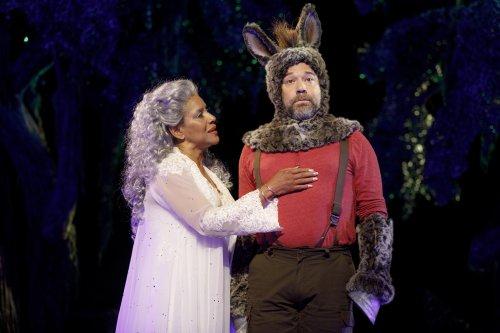 Phylicia Rashad and Danny Burstein in a scene from The Public Theater’s Free Shakespeare in the Park production of “A Midsummer Night’s Dream” at the Delacorte Theater (Photo credit: Joan Marcus)

Unseen for a decade at The Public Theater’s Free Shakespeare in the Park, the new production of the perennially popular comedy, A Midsummer Night’s Dream, directed by Lear deBessonet, founder of Public Works, is lavish to the eye and ear. What it is not is funny, being very low on the laugh quotient. While the actors, including such Tony Award winners as Phylicia Rashad and Annaleigh Ashford and nominees De’Adre Aziza, Danny Burstein, Shalita Grant and Kristine Nielsen try very hard to tickle the funny bone, the results are in vain. The show is always diverting but something has failed to click in this huge production with 26 actors, six musicians and an onstage jazz and blues singer, Marcelle Davies-Lashley.

A Midsummer Night’s Dream is a magical romantic comedy proving that “the course of true love never did run smooth.” The play follows the misadventures of four couples, two youthful ones (Helena and Demetrius, and Hermia and Lysander), a royal couple Theseus, Duke of Athens, and Hippolyta, Queen of the Amazons, betrothed to be married in four days, and an older couple, Oberon and Titania, King and Queen of the Fairies, who appear to be at a turning point in their relations.

When the Duke decrees that Hermia must bow to her father’s choice and marry Demetrius though she loves Lysander, the two decide to run away to his aunt through the Athenian woods. Hermia tells Helena, her best friend, who reveals the news to Demetrius thinking it would turn his affections back to her. Instead, all four find themselves lost in the enchanted forest ruled by Oberon and his mischievous attendant Puck, Nielsen in unusual casting.

When Oberon sees Demetrius’ cruel behavior towards Helena he orders his mischievous sprite Puck to obtain the juice of a flower called “love-in-idleness” and apply it to the eyes of the sleeping Demetrius causing him to fall madly in love with the first person he sees on waking. Unfortunately, Puck confuses the two Athenian men and it is Lysander whose affections are changed. Trying to correct the error, Oberon charms Demetrius’ eyes, only to have both young men chase Helena. All works out happily by the end in this knockabout, romantic comedy. 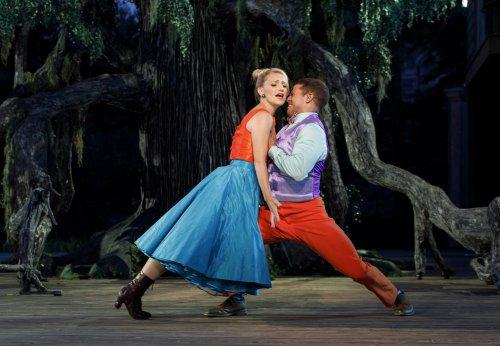 Annaleigh Ashford and Alex Hernandez in a scene from The Public Theater’s Free Shakespeare in the Park production of “A Midsummer Night’s Dream” at the Delacorte Theater (Photo credit: Joan Marcus)

Another plot concerns a group of Athenian artisans who led by Peter Quince, a carpenter, rehearse a play of “The most lamentable comedy, and most cruel death of Pyramus and Thisbe” that they hope to put on for the Duke’s wedding. Nick Bottom, the weaver, a rather bombastic sort, cast as the hero Pyramus, wants to play all the roles, but is convinced that the role of the lover suits him best. They meet in a clearing in the woods to rehearse.

In a fourth plot, Oberon is angry with his consort Titania as she will not give up her Indian changeling to him as his knight.  In order to punish her for her disobedience, he instructs Puck to make the sleeping Tatania fall in love with the first animal she sees. The whimsical Puck takes Bottom’s name as a provocation, and turns him into a jackass which causes the other workman to flee in terror. The magic works on Tatania who spends the enchanted night in love with the ass. All returns to normal in the morning with the ceremony of the three marriages and the performance of the amateurs’ play which is so terrible that it becomes unwittingly a farcical comedy.

Although the physical production has been well-thought-out, the script seems to have no interpretation other than a great deal of slapstick comedy which does not much register. The cast varies greatly in having found the core of their roles. Phylicia Rashad’s Titania is romantic and authoritative, while Richard Poe’s Oberon is wryly arch but ineffectual. Their fairy attendants are played by white haired and balding senior citizens but nothing much is made of this unusual casting. As Puck usually played by a youth or a dancer, Kristine Nielsen’s regular mannerisms are kept to a minimum but she seems much more amused by her mischief than the audience does. 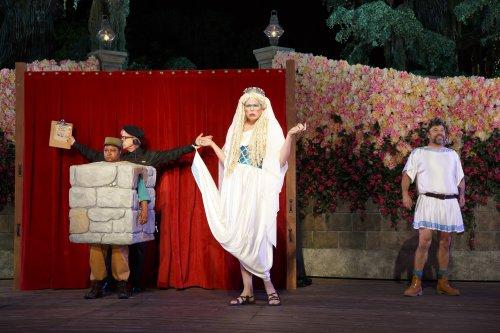 Patrena Murray, Robert Joy, Jeff Hiller and Danny Burstein in a scene from The Public Theater’s Free Shakespeare in the Park production of “A Midsummer Night’s Dream” at the Delacorte Theater (Photo credit: Joan Marcus)

An interesting gimmick is to have made Hippolyta, Queen of the Amazons, played by De’Adre Aziza, into a confirmed feminist giving Bhavesh Patel’s Duke Theseus a run for his money. However, he doesn’t seem to be playing along. Of the young lovers, the women have made much more of their roles than the men. Annaleigh Ashford as the tall, rejected Helena demonstrates why her comic gifts have been much admired on Broadway in recent years (You Can’t Take It With You, Sylvia, Sunday in the Park With George) doing something different on each of her lines and getting a laugh on each. As the beloved of both Lysander and Demetrius, Shalita Grant brings a kind of urban street smarts to her delightfully emotional Hermia. As their swain, Kyle Beltran and Alex Hernandez are entirely interchangeable, making it difficult to keep them straight. deBessonet’s physical comedy for the quartet of young lovers looks uncomfortable rather than spontaneous, like having all four fall asleep in four separate trees they have climbed.

The Athenian workmen are a comic motley crew. Danny Burstein gives a big performance as the loudmouthed and blustering Nick Bottom but fails to be comic. Cast as Thisbe, the female lover, Jeff Hiller’s tall, thin and awkward Francis Flute at first rejects this role, but as time goes on his Flute becomes more and more feminine and develops a colorful character around his part. Robert Joy as Peter Quince, in charge of the workmen’s troupe, clipboard in hand, is a rather phlegmatic, unflappable character. Joe Tapper makes Robin Starveling, the tailor, playing Moonshine, a very timid, easily agitated fellow, while Patrena Murray’s Snout, a tinker, is amusing as a rather stolid player no matter how much she is put-upon by the others in her role as Wall. Austin Durant, as Snug, a joiner, is a rather slow, simple fellow playing the Lion. However, for all their efforts, the performance of the play-within-the play does not register as the farcical nonsense that it should.

The physical production is quite lush and looks expensive. Clint Ramos’ color-coordinated contemporary costumes span the rainbow, until the wedding guests appear in formal black and the brides and grooms in all white, with the Duke and new Duchess in elaborate gold outfits. David Rockwell’s setting includes an enclosed garden for the palace and a forest of three huge trees, strung with Tyler Micoleau’s lighting which changes into various hues from green and red to blue and purple. Cookie Jordan is responsible for the elaborate hair, wigs and makeup designs which help differentiate the characters in the large cast. Justin Levine’s original music, like the songs of chanteuse Marcelle Davies-Lashley, which include both jazz and blues is fine in itself but seems to be the wrong atmosphere for the production. Nevertheless, the six member band conducted by Jon Spurney situated on stage left in their own treehouse do a fine job with the score. Chase Brock’s choreography turns the final scene into a giant party.

While much care has gone into Free Shakespeare in the Park’s A Midsummer Night’s Dream directed by Lear deBessonet, ultimately it is heavier going that it should be. What ought to be a light mirthful comedy of the vicissitudes of love ends up looking more like a director’s project given a great many production resources. The actors appear to be getting quite an exhausting workout.

The Public Theater’s Free Shakespeare in the Park

Free tickets distributed at Noon via the free lines at the Delacorte Theater to those on prior line each day there is a public performance or by lottery at http://www.publictheater.org/tickets/ticket-lottery or Today Tix app.