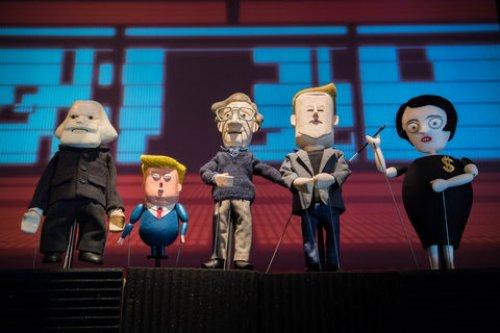 Noam Chomsky, Karl Marx, Ayn Rand, Elon Musk, Steve Jobs and a “Tiny” Trump all on stage at the same time, verbally jousting with each other?  Pedro Reyes’ Manufacturing Mischief at the Tank does, indeed, throw these historic figures together in a play that is intellectually stimulating and quite witty as these giants tear each other apart.

These characters are portrayed as brilliant puppets provided by Christine Schisano, and manipulated and voiced by a terrifically skilled cast that includes Ms. Schisano, Victor Ayala, Mery Cheung, Julia Darden and Christina Stone.

The play opens at Elon Musk’s “Elite Expo – Intellectual One Percenters Welcome (Only) – Brought to You by SpaceX (and other dark forces of the underworld)” where an artificially generated Steve Jobs materializes to host a contest for new Artificial Intelligence devices where Chomksy, linguist/dissident, is head judge. 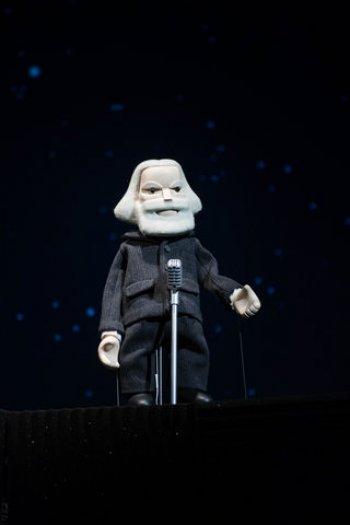 A student of Chomsky, Millie Persistington has invented a Print-a-Friend machine which causes a totally hideous Ayn Rand to be re-animated when her Atlas Shrugged is casually tossed into the device.  She joins with Musk, here portrayed as one step away from total villainy, to plot to steal that advanced technology so that they could dominate the world.

Along the way, a rapping Karl Marx puts in a hilarious appearance to criticize the overwhelming new religion of the mighty dollar. Tiny Trump whom Jobs calls “a gross fucking moron,” to the delight of the audience filling the Tank theater, materializes after someone pees into the Print-a-Friend.

The power of technological advances and fake news to do harm becomes potently clear when puppet Chomsky muses about the Jewish Nobel Prize-winning chemist Fritz Haber whose contribution to cheap fertilizer not only helped humanity but then was distorted and used to kill millions in gas chambers. Could Print-a-Friend be used to resurrect Adolf Hitler? 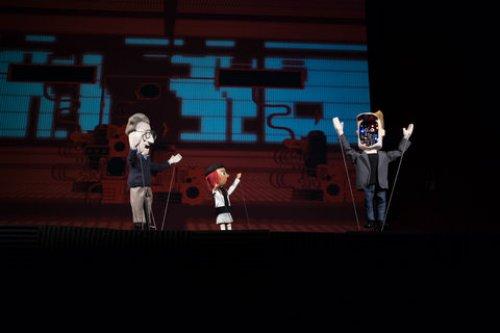 Reyes’ ideas, with the help of Paul Hufker’s writing contributions are sophisticated commentaries on morality, technology and politics that are always buoyantly expressed without ever talking down to the audience.

The plain set—a curved brown wall with cutouts—could use some beautifying, but the lighting of Brian Aldous, the musical score by Mike Cassedy and the video/sound effects by David Pym are all first rate.

Running time:  70 minutes with no intermission