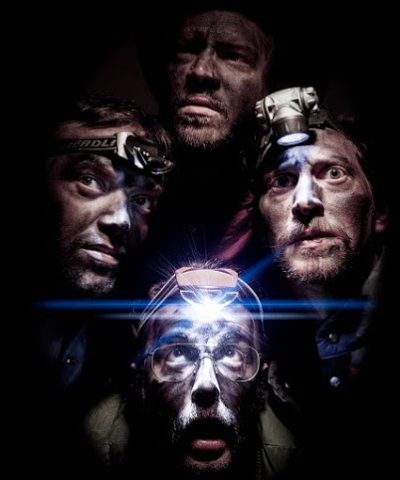 One of the most appealing aspects of live theater is the level of intimacy which comes with spending two hours isolated in a room of complete strangers, watching a story unfold in real time. For an audience member, it is a vulnerable, exciting experience, and the best productions bring the entire room along for the ride. In a mission to exploit and bring this intimacy to entirely new level, Casey Wimpee’s Butcher Holler Here We Come practices unconventional theater techniques to absorb the audience into the actual production.

Butcher Holler Here We Come begins like any other theatrical: a quick pre-show announcement to silence all electronic devices, a note about the run-time of the production, and then a black out. The difference is that once those house lights go completely dark, they never turn back on until the final bow. With the exception of the small mining headlamps strapped to the foreheads of the five actors in the production, from beginning to end, this entire show is performed in darkness. In fact, it is nearly fifteen minutes in complete darkness before even one of the actors turns on a headlamp.

In itself the concept is unusual and intriguing, but the effect of watching in the dark is elevated further by the story. Set in 1973, West Virginia, five coal miners up at “Moonshine Mountain” are working in a mine when a sudden collapse occurs and traps them in between rocks and coal, and shrouds them in darkness. Though this is a completely fictional account, the central catastrophe is something which throughout history has taken the lives of many workers and is a very plausible event. In an attempt to simulate this fear as realistically as possible, the darkness destroys the fourth wall and places the audience smack-dab in the middle of the event. 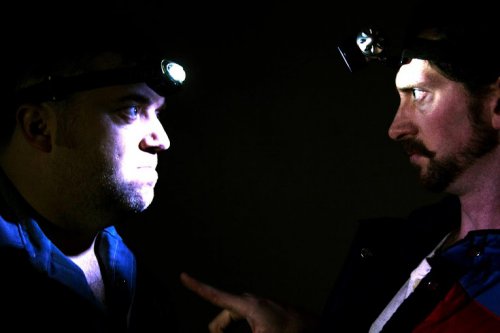 Each of the five actors seen in the rotating casts (Adam Belvo, Isaac Byrne, Colt W. Keeney [July 24 -26], Adam Laten Willson and Cole Wimpee, alternating with Michael Mason [Aug 5 – 8] and Harlan Short [July 30 – August 2) provides a committed and powerful performance, and the gravity of the situation is never doubted. As if the oxygen is slowly being depleted from the room, these poor men slowly lose control of their mental facilities in startling fashion.

In a particularly unsettling performance, Willson’s Leander Pope slowly unravels with every passing second. Danger in many forms creeps into the play the longer the men are trapped underground, and this aspect of fear is made even more frightening by the constant darkness. It is not uncommon for harsh clanging, screaming, or shuffling noises to ring from all corners of the room, a tactic which further dilutes any sense of location or reality.

Though Casey Wimpee’s new play is innovative, the language is slightly too poetic for the occasion. Spurts of heightened text arrive cryptically and ultimately lessen the importance of much of the dialogue. As a result, the text is an afterthought to the themes and intentions of the play. Directed by Leah Bonvissuto, Butcher Holler Here We Come feels like one grand hallucination. Since Butcher Holler Here We Come is challenging to theatrical customs, seeing this play before closing should be a priority simply on concept alone.