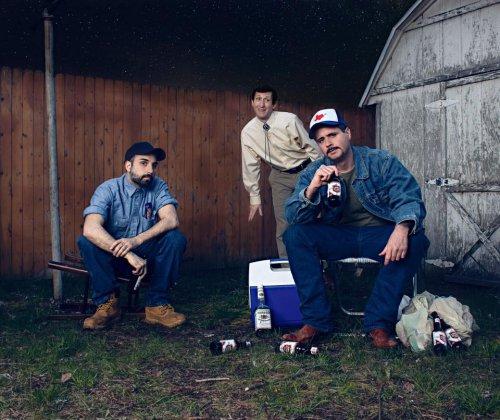 Earthy, thoughtful and very funny, this is a roaring revival of the notable, one-act play Lone Star.

“It’s just a juke joint with a lot of sluts and rednecks who want to break your nose for you” is how Angel’s bar, Maynard, Texas, is described.  The play takes place on a Friday night at 1:00 AM in its litter-strewn, backyard. There’s a lawn chair, a trashcan and a two by four lying around.

Texas-born playwright James McLure (1951-2011), achieved a moderate level of theatrical prominence in the late 1970’s with one-act plays that include this one and Laundry and Bourbon.  Lone Star was first performed Off-Broadway with Mr. McLure’s Pvt. Wars in 1979 and ran for 69 performances.

“I love my wife, my country and my car,” says Roy, a Vietnam War veteran who drinks bottle after bottle of Lone Star beer, and later whiskey.  He rhapsodizes about his many sexual conquests that took place in his 1959 pink Thunderbird convertible.   Fueled by alcohol, he is short-tempered, and the effect of serving in Vietnam has obviously taken a psychological toll on him.  That’s most evident when he recounts a series of atrocities that he witnessed there.

Ray is Roy’s younger, dim-witted brother who endures Roy’s belligerence due to their blood tie.  A football injury made him ineligible to serve in Vietnam.  Their mother is senile, and their father isn’t very bright: “He named me Roy and you Ray!”

Interrupting the brother’s reveries is Cletis who works in his father’s appliance store.  He’s a nerdy, former high school classmate of Ray’s who’s always idolized him but whom Roy can’t stand.  The play’s plot is a series of personal upheavals that arise from the interactions of the three men.

Alternating between flavorfully humorous and darkly revealing dialogue, Mr. McLure vibrantly renders his characters’ personalities and motivations.  There’s a hilarious analysis of the incompatibility of eating a Baby Ruth candy bar while drinking beer.  With this sociological slice of life, McLure has created three strong roles for actors, and this production’s cast plays them with assurance.

A reminiscence about the first time Roy looked up a girl’s skirt has the intense impact of a Shakespearean ode due to Matt de Rogatis’ commanding vocal and physical abilities.  Recalling the charisma of the young John Malkovich in True West, and channeling the complexity of the film actor Warren Oates, Mr. de Rogatis vividly conveys the character’s despair and hopelessness with his imposing presence and perfect twang.  Pacing restlessly, howling like a coyote and gazing up at the stars are among the striking facets of de Rogatis’ magnetic performance.

The charmingly low-key Chris Loupos winningly achieves the optimum balance of affability, mental slowness and compassion as Ray.  Mr. Loupos’ comic timing and soulfulness makes the character seem like a resident of Mayberry from The Andy Griffith Show.

In addition to guiding the cast’s impressive performances, director Pete McElligott’s staging is equally accomplished.  There’s a lot of well-orchestrated movement as well as finely choreographed fight sequences, that all add up to an energetically paced and precise presentation.

Besides being an engaging vehicle for the trio of talented actors, this spirited production of Lone Star is also a welcome opportunity to experience and rediscover the work James McLure.  His wit, irreverence and depth, have a Chekhovian sensibility that’s been transplanted to the land of pick up trucks, blue jeans and Country and Western music.

Lone Star was orgininally presented as part of the theater event,  The 2017 Spotlight On Festival: Rise of The Phoenix.