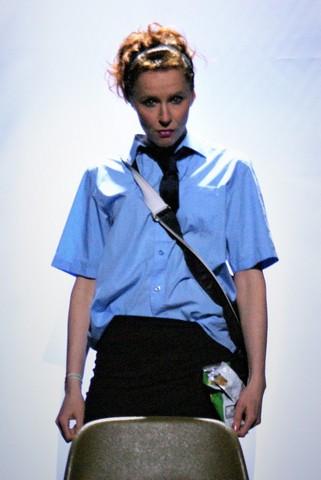 Colette Forde in a scene from “Innit” (Photo credit: Courtesy of SoHo Playhouse)

My name is Kelly Roberts and I go to Sacred Lady High School in Manchester. I like PJ and Duncan and getting off with lads. When I leave school I’m gonna be a singer at Butlins and I’m gonna get a belly ring.

So begins Colette Forde’s 1990’s-set monologue Innit, depicting this spunky 17-year-old girl’s tough life. It’s in the British theatre’s working-class kitchen sink tradition that goes back to A Taste of Honey. Filled with colorful descriptiveness, it’s short on plot and reaches a bleak conclusion. Running 50 minutes it holds the interest.

Wearing a school uniform of a black skirt, white blouse and a black tie, Ms. Forde also plays Kelly and she’s written a grand vehicle for herself that she terrifically performs. The blonde, leggy and animated Forde emotes in a thick but intelligible accent and is fully convincing as a teenager. The title is a playful guttural pronunciation of “isn’t it.” Forde conveys all of the character’s pathos, sly humor and wistfulness. The revelatory epiphany as the play ends is quite moving due to her intensity.

Structured as a series of confessional vignettes, Innit begins in the school psychologist’s office and alternates between there and Kelly’s home. Her 34-year-old mother works at a sandwich shop and is a part-time prostitute. Her absent ne’er-do-well father abandoned the family and went back to his native Ireland some time ago. Money is tight and so is hope. Kelly is combative and doesn’t really have friends. She gets free cigarettes for allowing boys in gym class to take manual liberties with her. The dialogue is earthy, conveying a youthful sensibility with “dick head” being a favored exclamation. 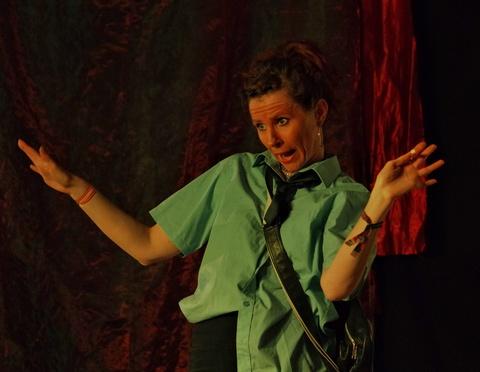 Colette Forde in a scene from “Innit” (Photo credit: Courtesy of SoHo Playhouse)

Forde’s staging is simple and effective. She is artfully positioned throughout the presentation in various areas of the small stage that has some chairs and a table. From behind the back wall’s white screen she executes some neat dance moves that are shown in shadow, illustrating the character’s yearning and desires. The show’s opening is a fun and cheeky recreation of a 1990’s music video in the style of Kylie Minogue that’s projected on the screen. The fine sound design consists of snippets of pop tunes of the era. The lighting design has crisp blackouts as sequences end and bright bursts as new ones begin.

Playing in repertory with Innit is Eavan Brennan’s Get the Boat which also appeared at this year’s Limerick Fringe festival. This program is presented by the SoHo Playhouse and is billed as “Two Irish Female Playwrights In their American Debut.”

Running time: 50 minutes with no intermission