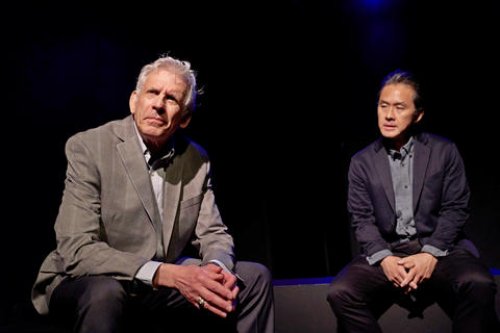 Michael S. Horowitz and David Lee in a scene from the Chain Theatre’s revival of Robert Anderson’s “I Never Sang for My Father” (Photo credit: Michael Abrams)

Robert Anderson’s 1968 I Never Sang for My Father is a clear-eyed and ultimately deeply moving study of the relationship between a middle-aged son and his aged father, a relationship fraught with emotional landmines, kind of an inverse of A.R. Gurney’s lighthearted look at the same upper middle-class population.

Made into a fine film in 1970 with a cast that breathed life into the somewhat plodding rhythms of Anderson’s lines, I Never Sang for My Father displayed its hidden emotional treasures.

The current production directed by Richard Hoehler never quite achieves a similar revelation, partly due to casting and partly due to odd creative choices made by Hoehler and his artistic staff. 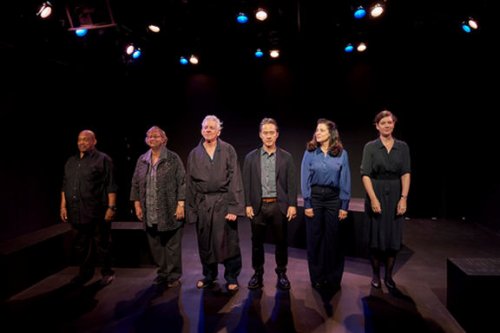 The cast of the Chain Theatre’s revival of Robert Anderson’s “I Never Sang for My Father” (Photo credit: Michael Abrams)

Gene obviously loves his level-headed and charming mom, but she dies leaving him bereft and forced to deal head-on not only with his father but his sister Alice (Francesca Ferrara) who was thrown out of the house years back for marrying a Jew.

The trio of Alice, Tom and Gene head to a bleak confrontation over Tom’s future which leads to Alice giving up on both of them.  Gene caves in.  Despite his having a chance at a new life of his own, the widowed Gene tries to convince Tom to join him and his fiancée in California.  Their subsequent battle puts a permanent rift in the father/son relationship and leads to what should have been a heartbreaking ending. 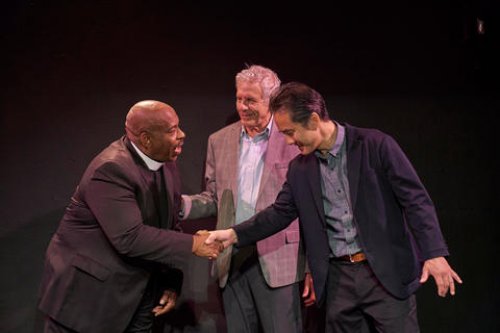 Ron Horton, Michael S. Horowitz and David Lee in a scene from the Chain Theatre’s revival of Robert Anderson’s “I Never Sang for My Father” (Photo credit: Michael Abrams)

The trouble is Lee’s almost catatonic approach to Gene.  He speaks in a toneless monotone and adapts a monolithic physical approach, his hands constantly held stiffly at his sides.  When he does erupt in anger it registers as bizarre overacting rather than the culmination of a life of living under his father’s thumb.  This leaves an emotional vacuum in the center of the play.  Even when he delivers the poignant punch line—“Death ends a life, but it does not end a relationship”—what should have been an emotional wallop becomes a whimper.

The other actors, including Ron Horton and Elizabeth Maille in a variety of side characters, try their best, but there is no obvious consistent approach to the play which probably reflects back on Hoehler’s direction.

Perhaps, as the run continues, the actors will go deeper into their roles, but they have too much working against them.