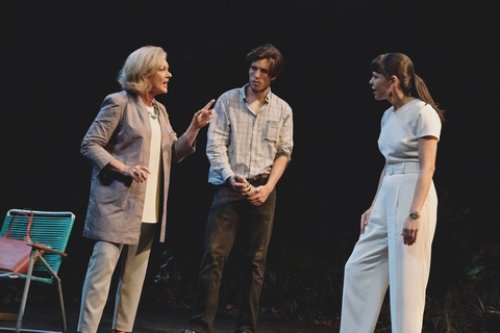 Michelle Pawk, John Zdrojeski and Zoë Winters in a scene from Will Arbery’s “Heroes of the Fourth Turning” (Photo credit: Joan Marcus)

Numb from two straight-through hours of far-right speechifying emoted in perpetual semi-darkness, the audience at Heroes of the Fourth Turning then endures a ghastly aria of despair by a Lyme Disease-debilitated character. We also soon learn a deafening recurring sound that was thought to be innocuous, may have supernatural ramifications as the play ends on an unjustified cryptic note. The shooting and implied mutilation of a deer during the awkward prologue was an omen that this was going to be a lulu of a bad play. It’s symptomatic of the uneasy symbolism threaded throughout.

…is my play, somehow, a condemnation? Where do I end, and the characters begin? After all, this isn’t an uncut C-SPAN feed. I chose everything these characters say and don’t say. I end it where I end it… But, to be honest, I think I’m after something a little more dangerous. I think I’m after a fugue.

So states playwright and Obama-voter Will Arbery in his pompous program notes detailing Heroes of the Fourth Turning’s autobiographical connections. Mr. Arbery demonstrates a talent for dramatic writing with his solid The Big Chill-style scenario that is buttressed by stinging dialogue, combative characters and contemporary zeal. However, problematic is a lack of plot and kooky tangents. It comes across as a didactic attempt to explain this segment of the population’s world views to liberal New York City theatergoers in this Playwrights Horizons-presented world premiere production. The play’s title is derived from historians William Strauss and Neil Howe’s 1997 book, The Fourth Turning. It posits a prophetic theory of how American history predicts the future based on past events. One of the play’s characters espouses these beliefs.

We’re in rural Wyoming on August 19, 2017. It’s one week after the Charlottesville riot and a solar eclipse is imminent. Gina Preston, a 1996-Pat Buchanan supporter who hosted a fundraiser for him at her home, is a distinguished professor at the Catholic Transfiguration College of Wyoming and has been appointed as its president. Following her installation ceremony, there’s a celebratory party given by one of her former students, attended by his fellow graduates from their class of seven years ago. 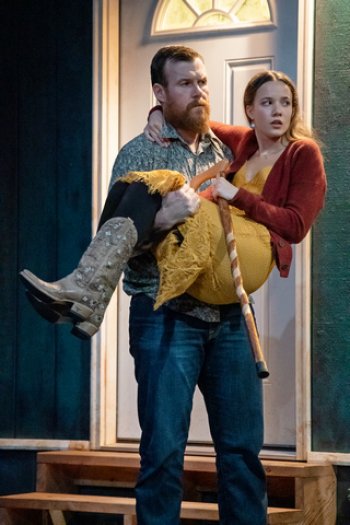 Jeb Kreager and Julia McDermott in a scene from Will Arbery’s “Heroes of the Fourth Turning” (Photo credit: Joan Marcus)

The host Justin, a serious 38-year-old former Marine, is older than his classmates who went back to college for enlightenment. It’s late and so there are just a few attendees left who convene in the backyard. Cocaine-wired Teresa is an internet commentator from Connecticut, who lives in Brooklyn and is soon to be married. The Chekhovian Kevin is a forlorn single minor academic who drinks too much. Emily is Gina’s melancholy infirm cane-wielding daughter.

Everything you ever wanted to know about the John Birch Society is imparted during the often contentious crosstalk where Barry Goldwater and Steve Bannon are lauded and Hillary Clinton, Roe v. Wade, and gay and trans people are lambasted. Being Pro-Life unites everyone against “Baby Killers” and is their chief issue. Donald Trump looms, of course, and there’s a gamut of reactions to him. The often abrasive characters are mouthpieces with a modicum of trite biographical details that are placed in a rudimentary Lanford Wilson-type ruminative scenario. The metaphysical tangents magnify the play’s faults.

Director Danya Taymor’s efficient physical staging injects as much force and visual variety as possible into such a verbose work. The fact the action takes place at night is realized by near darkness which is distracting. Ms. Taymor allows the cast to go full throttle with their overwrought characterizations, rendering the strident figures with grating accuracy. 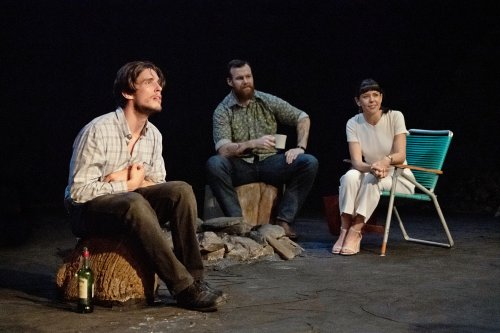 John Zdrojeski, Jeb Kreager and Zoë Winters in a scene from Will Arbery’s “Heroes of the Fourth Turning” (Photo credit: Joan Marcus)

Zoë Winters as Teresa, John Zdrojeski as Kevin and Julia McDermott as Emily are all animated to the point of being unbearable.  Jeb Kreager as Justin fares better due to the role’s solemnity. Tony Award-winning veteran actress Michele Pawk brings charisma and Phyllis Schlafly-style grandeur to the part of Gina with her soothing vocal tones.

Depicting the sensibility of Christian conservatives and the polarized present U.S. political scene are suitable materials for an insightful stage treatment. Heroes of the Fourth Turning is not the monumental take on these subjects it aspires to be.

Heroes of the Fourth Turning (extended through November 17, 2019)