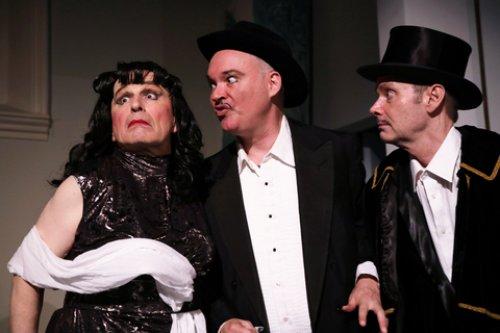 When I sing well they applaud, and when I do not they boo and jeer…there are certain nights when I feel that the performance is going particularly well, and that I have attained a kind of perfection, but the public does not agree. That is what haunts me.

So opines the awesome Everett Quinton as the operatic diva and titular character of this spirited revival of Charles Ludlam’s 1983 camp classic Galas. The original Off-Broadway production was a showcase for Mr. Ludlam’s monumental talents and which in Mr. Quinton played a supporting part in. Now, Quinton assumes the lead role that’s inspired by Maria Callas and he gloriously exhibits his supreme and renowned artistry.

His animated dour presence endows his mesmerizing characterization with commanding comic flair and aching pathos. His weathered sharp features are garishly made up and he’s garbed in a variety of wigs and flamboyant dresses making him a vision of mock solid femininity. Combined with his gruff expressive voice and precise physical movements that include twirling, priceless double takes, finger pointing and rich stares with his piercing eyes, he achieves magnificence. That accomplishment along with his grandiose direction brings to life the celebrated glory days of the legendary Ridiculous Theatrical Company that Ludlam founded in 1967. 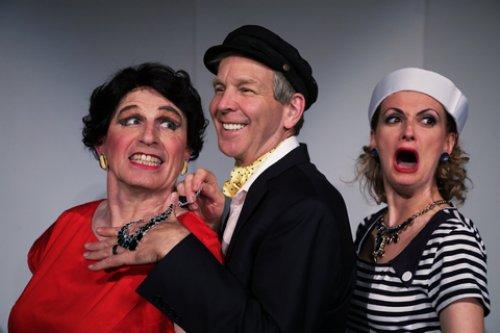 Quinton’s staging contains terrific pageantry with processions through the center aisle of the theater, neat sight gags such as a foot in a bucket and a dog puppet held while actors bark. As much humor as possible is mined throughout this low-tech though visually splendorous production while conveying the piece’s ingrained thoughtfulness.

Another major attribute is the company of animated, often gender bending, farceurs Quinton has assembled.  With her striking open mouth gape, flaming eyes, honeycomb of black hair and guttural delivery Jenne Vath is out of a Mel Brooks movie. Ms. Vath smashingly portrays the maid and former opera singer and confident of Galas which is the part Quinton played in 1983. Plainspoken yet emotive, Beth Dodye Bass’s heightened sincerity is both comical and touching as Galas’ brick magnate discoverer and later cast-off husband. The Pope, an Aristotle Onassis stand-in, waiters, sailors, priests and a Time magazine reporter are personified by the deliriously mirthful turns of Shane Baker, Christopher Johnson, Maude Burke, Géraldine Dulex, and Mark Erson.

Scenic designer Jim Boutin’s fabulous painted flats uproariously depict the locations. An Italian train station, the Vatican, La Scala, the luxury yacht Plato and a pink-hued Paris apartment with a pink Eiffel Tower visible from a window are all on display. A standout is a large cutout of a locomotive. Robert Neapolitan’s lighting design is a simple on and off affair achieving wonderous results. Mr. Neapolitan’s sound design artfully renders effects and several arias that are lip-synched. Costume designer Ramona Ponce lavish assortment of quirky garments totally realizes the look of each zany character. 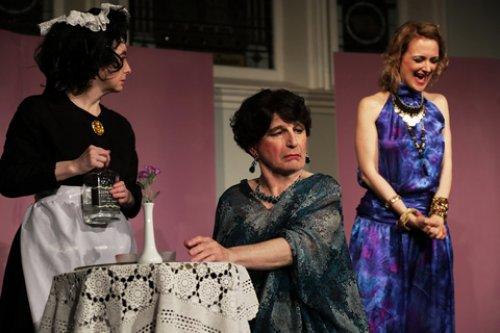 This first-ever revival of Galas intentionally coincides with World Pride and the 50th anniversary of the Stonewall Uprisings. It honors the memory of Ludlam who died of AIDS in 1987 at the age of 44, affirms its high reputation and demonstrates that its eternally funny. It’s performed at the historic and under repair Theatre at St. John’s Lutheran Church on Christopher Street in Manhattan which is close to Sheridan Square where the original production premiered and to the Stonewall Inn.

Theatre at St. John’s in association with Yorick Theater Company