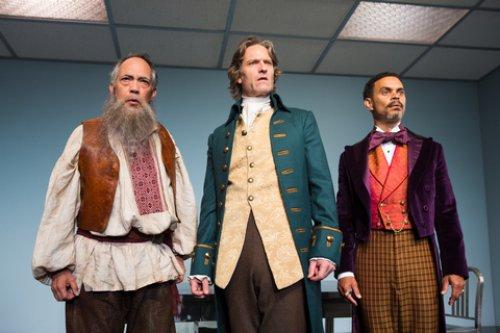 In Jean Paul Sartre’s play No Exit, three people who do not want to be together find themselves locked in a room in Hell. In Scott Carter’s new play, The Gospel According to Thomas Jefferson, Charles Dickens and Count Leo Tolstoy: Discord, three famous men, a statesman, a novelist and a philosopher, strangers to each other find themselves locked together in a room in the afterlife although they have never met before and have died years apart. What do these men (an American, an Englishman and a Russian) have in common? As they discover before long, all had written their own version of the gospels. But why bring them together now? Apparently, despite their religious beliefs all three were hypocrites about love and life and must confess their sins.

The problem with the play is inherent in the clunky title: it has been conceived as an intellectual debate and that does not make for good drama. The author has been the executive producer/writer on Real Time with Bill Maher. There he knows that real confrontation makes for good television. Here he seems to have forgotten that good talk alone does not make a good play. And what do his Jefferson, Dickens and Tolstoy talk about? They first wonder if they are in heaven or hell, but appear to be in a state of limbo. Looking in the mirror (invisible to us) they discover that they have reverted to the prime of life, appearing better in death than they did when they died. Then they argue about which was the more famous and successful.

After they try to exit the locked room, the desk’s drawer suddenly opens revealing a Bible, a journal and a pen. They decide that they may have been placed here to collate their versions of the Bible into one. Unfortunately, they can’t agree on one interpretation. Finally they decide that maybe they must examine their lives. Their confessions prove that each treated their family badly but had an exemplary, but undeserved reputation. This admission leads to the play’s outcome. 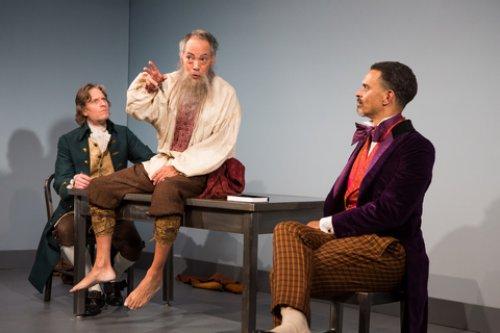 Although director Kimberly Senior who also piloted the Chicago production has staged the play with elegance, she never really turns up the heat so that there are not many sparks in Carter’s debate. Discord, yes; but no fireworks which might have made the discussion more dramatic. The play uses titles on the back wall to name each of the 14 scenes much in the manner of Brecht’s alienation effect. This breaks up the play but is not very informative. The device of the invisible fourth wall being a mirror in Wilson Chin’s all blue-grey interrogation room seems a gimmick to allow the men to face the audience directly for much of the play.

The biographical information given by the three men does not reveal any great surprises but only covers what is generally known about them. As a result the acting is one dimensional: Michael Laurence as Thomas Jefferson is placid and thoughtful. Duane Boutté as Charles Dickens is only interested in his fame and his audience as a performer. Thom Sesma’s Count Leo Tolstoy (dressed as a peasant which is how he looked in his later years) comes across as dour, grim and intransigent. Ironically, their accents are the most convincing thing about each of them. Their roles are mainly defined by David Hyman’s period-perfect costumes which make them look much like their well-known likenesses.

Scott Carter’s The Gospel According to Thomas Jefferson, Charles Dickens and Count Leo Tolstoy: Discord has an interesting premise. However, at 90 minutes and with almost no action, the play outstays its welcome. It has the potential for drama, but in this form it is mostly an intellectual debate on philosophical topics much of which are difficult to take in on a first hearing.

The Gospel According to Thomas Jefferson, Charles Dickens and Count Leo Tolstoy: Discord (through October 22, 2017)