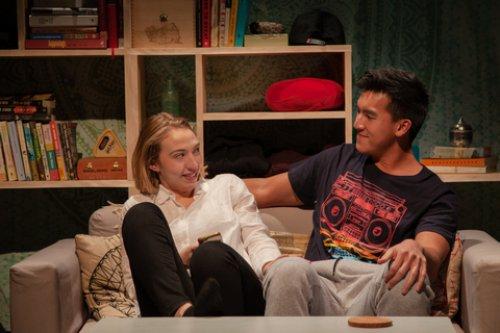 Clea DeCrane and Andy Do in a scene from “Bitter Greens” (Photo credit: Brendan Swift)

Though it was common practice centuries ago, perhaps the final take-away from Bitter Greens–a new play by Clea DeCrane–is that an actor should not perform in her own work. In the play, DeCrane portrays Reyna, a character that is both confused and confusing. She’s also more than a little aloof. When Reyna announces that she’s going “to go on a cleanse,” another character, Caitlin (Jessica Darrow), asks her, “A cleanse from what, vegan bites and vitamin water?”

While she was a “straight A” college student, the “overachieving” Reyna was also doing an internship with Green Communications, an eco-friendly company with high-minded goals. But now that she’s graduated, it turns out that the job that should have been hers has been given instead to her boyfriend Andrew (Andy Do), an Asian-American who wrote to the company “on a total whim” while he was visiting Tokyo with Reyna. 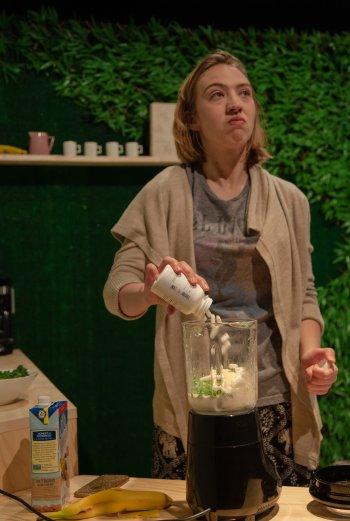 Reyna understandably resents the turn in events, which poisons her relationship with Andrew–in more ways the one. She ends up having an affair with Jack (Ben Lorenz), a delivery boy who delivers more than just “a couple of stuffed peppers” from Trader Joe’s to Reyna.

It also turns out that Jack is in a relationship with Reyna’s friend Lily (Regan Sims). From these soap-opera-ish elements, Bitter Greens fails to ever come together as anything resembling a dramatic salad. It’s as jejune and naive as its youthful characters.

Set in Berkeley, where presumably most of these characters went to college (but also, presumably, not Jack), Caitlin refers to “those of us who live in California and already pray to kale like it’s the Buddha.”

While the small stage space of Theater C at 59E59 Theaters features an actual blender, Reyna uses it to concoct a “kale, banana, almond milk and plant protein” drink for Andrew, who we come to realize she’s attempting to poison. 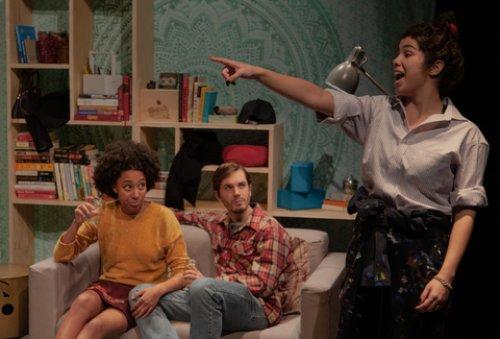 Directed by Kevin Kittle, DeCrane as Reyna proves unnatural–she’s obviously acting even as she’s acting obvious. As costumed by Christianne Bakewell, an elegant Regan Sims shines as Lily. Andy Do is perfectly ambivalent as Andrew and Jessica Darrow is solid as a somewhat sassy Caitlin.

While references to “kale” prove relentless, in the end, Bitter Greens is a hard pill to swallow.