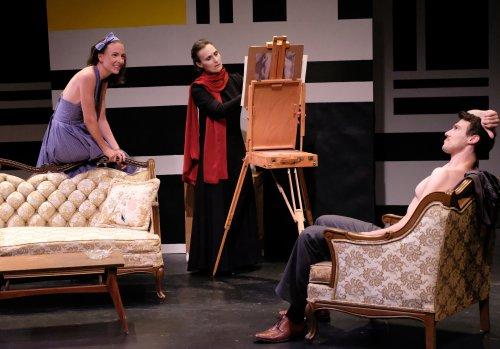 Karen Blixen (AKA Isak Dinesen) is best known in the United States for the award winning film versions of her memoir Out of Africa and her short story Babette’s Feast. However, the life she led in Denmark after leaving Kenya was just as fascinating as the one depicted in the film. This has been dramatized by acclaimed Danish playwright Thor Bjørn Krebs in his 2011 The Baroness – Isak Dinesen’s Final Affair, now having its American premiere at the Clurman Theatre at Theatre Row. The mesmerizing, layered performances by Dee Pelletier as the 62-year-old Baroness Blixen (as she was called) and Conrad Ardelius as her young protégé, the poet Thorkild Bjørnvig, make this a very special evening in the theater as directed by Henning Hegland co-artistic director of Scandinavian American Theater Company which has produced the play.

Inspired by anecdotes, letters and books by and about both of them, The Baroness, which compresses the time scheme and is a free interpretation of their actual relationship, is told from Bjørnvig’s perspective. At age 29, unable to write after his great success with his first published book of poems, he contacts Baroness Blixen, Denmark’s most famous author, (formerly married to a baron), about submitting something to Heretica, the literary magazine that he edits. She invites him to dinner at her estate Rungstedlund. He is captivated by the elegant, brilliant woman and she is equally smitten by the handsome, talented young man. She is unaware that he is recently married and has a young son. When he hits his head resulting in a dangerous concussion, she invites him to recuperate at her estate which will make it easier for him to write without distraction. And so begins their relationship described by him in his memoir, The Pact: My Friendship with Isak Dinesen.

Blixen casts her spell around the young man, challenges him to think and feel and open himself up to new sensations. She gives him an African dagger, introduces him to great music on the gramophone given to her by the love of her life flyer Dennis Finch Hatten, as well as the worship of the moon. Is she a witch or practicing voodoo on him? In any case, he is caught in her meshes, something his off-stage wife Grete doesn’t seem to like. The Baroness doesn’t believe in marriage for artists and urges him to have an affair. She gets him to undress so that she can paint him. But alas her erotic days are over as she contracted syphilis years before from her former husband and doesn’t know if she has been cured. Bjørnvig begins writing again but begins to lose his identity as they grow too close. When a fellowship in Bonn is offered he takes the opportunity to escape. Years later they meet up again at his summer home in Kandestederne in the far north of Denmark. Now she has broken though her writer’s block and written “Echoes,” a symbolic story based on their relationship from her point of view. 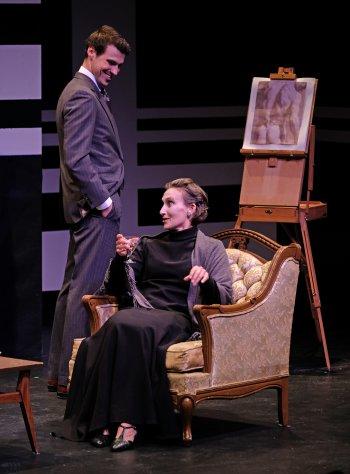 As Blixen, Pelletier is riveting as she wraps her cocoon around the unsuspecting but susceptible young man. Catlike and sinuous as she stalks him and the stage, she is cajoling, seductive, mysterious, wise all at the same time, as they discuss writing, poetry, philosophy, beliefs, memories, desire, and how to live one’s life. Impeccably dressed by Stine Martinsen, she exudes glamour as well as baring her soul. She inhabits the role making us think that we have met the real Karen Blixen.

Conrad Ardelius, a Swedish Adonis who appears to be making his Off Broadway debut, gives a very textured performance as the young poet who has his life up ended by this seven year encounter. Callow at first, he becomes more and more able to play Blixen’s games as he reveals varying states of emotions. Though he is allowed to reveal little through his dialogue, with his soulful expression Ardelius lets us into his thoughts as the poet who finds himself in over his head. He matches Pelletier’s more nuanced performance by holding back his feelings while she casts a palpable net around him, one that can be felt from the audience. The escalating tension between them envelops the stage.

In the smaller role of Benedicte Jensen, wife to Bjørnvig’s publisher and benefactor and friend to Blixen, Vanessa Johannson is charming though she is infrequently seen but just as mysterious when she does. She makes every one of her lines appear to mean more that she is actually saying. Also dressed beautifully, she is an object of desire waiting her opportunity. Her few conversations with Blixen are a cat and mouse game, but who is the cat and who is the mouse? The strange relationship threatens to become a tug of war for the prize, Bjørnvig. 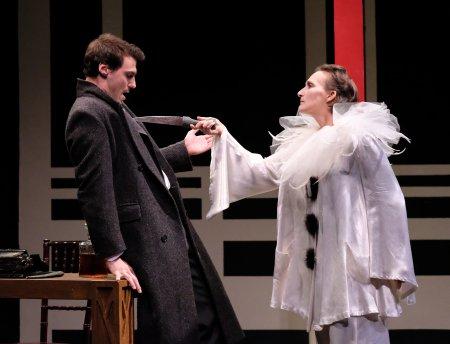 Using the Kim Dambœk translation which premiered in Edinburgh in 2013, Hegland’s direction is unobtrusive and polished. The stylized setting by Akiko Nishijima Rotch in black and white with its few pieces of furniture works well for the heady conversations while Mondrian-like colors in red, yellow and blue begin to appear on the walls. The elegant costumes by Martinsen which make very subtle use of color (a red scarf, a yellow sweater, a blue coat) are from the original production in Copenhagen and were exhibited at Blixen’s home Rungstedlund, along with garments from her own wardrobe. Miriam Crowe’s lighting, Aleksi Ranta’s original music and Amy Altadonna’s sound design all contribute greatly to the overall effect.

Dramatizations of the lives of authors rarely work as it is very difficult to show them in the act of creation. In The Baroness – Isak Dinesen’s Final Affair, Thor Bjørn Krebs has brought Karen Blixen and Thorkild Bjørnvig to vivid life both as people and as artists using primary sources. Dee Pelletier and Conrad Ardelius do not seem to be acting these roles as much as living them. Just try taking your eyes away from the stage for a moment. It will be difficult to imagine anyone else in these roles in the future.