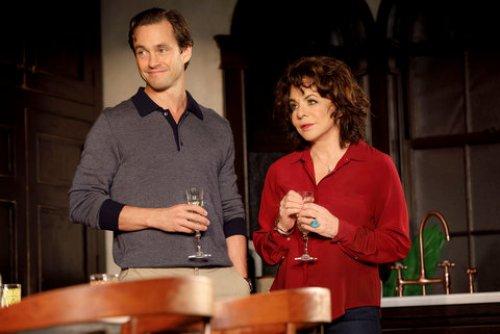 Apologia must be seen for Stockard Channing’s impressive and multilayered performance. But the stalwart actress, at the peak of her form, is far from the only reason for seeing this new, richly resonant play by Alexi Kaye Campbell, which first played in London last year.

Channing is by turns aggressive, assertive, jittery, neurotic, imperious, and even petulant in the first act, only to become bewildered and subdued in the second. To rewrite Dorothy Parker’s notorious put-down of Katherine Hepburn, Channing runs the gamut of emotions from A to Z in Apologia, even as she takes us along for the ride.

In the play, Channing plays Kristin Miller, an art historian, who recently published a memoir that focuses on her work, and who is, today celebrating her birthday with her two sons, their respective partners, and her old, gay friend, Hugh (John Tillinger), with whom Kristin joined many a political cause in the 1960’s. (Though we don’t see it, we’re told about the picture of Karl Marx, Kristin has hanging in her bathroom.)

As designed by Dane Laffrey, Kristin’s nicely appointed country home includes well-stocked bookcases, a lot of art work, a staircase in the rear, a large central dining table, and the kitchen to the right, with a window above, and various entrances. It’s through that window that Bradley King’s always effective lighting perfectly reflects the various times of day and night, as all the characters verbally spar with each other–except for Hugh, who is always trying to interject some comic relief into their bickering. 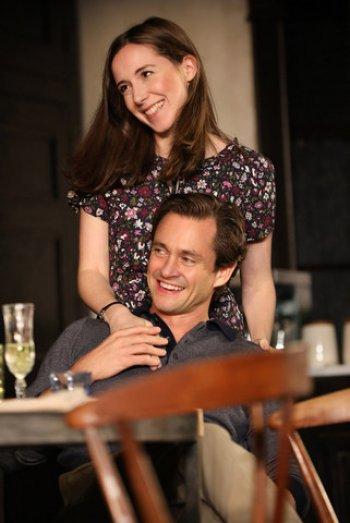 While maintaining her interest in fighting the good fights, at least part of the friction between Kristin and her sons is her feeling that they are not engaged enough in what really matters. But for Peter, a banker, and Simon, a would-be novelist and serious alcoholic, their wounds run much deeper, beginning with their mother’s abandoning them, when they were nine and seven, respectively; and now, resenting the fact that their mother doesn’t even mention them in her new, quasi-memoir, which, like the play that contains it, is also entitled Apologia.

But as Kristin tries to explain, her memoir focuses on her career as opposed to her personal life. And as we eventually learn, she didn’t abandon her sons when they were small children, so much as their father took them away after the couple’s divorce. It all makes for explosive circumstances, however, providing Channing with one opportunity after another for expressing all the aforementioned emotions.

Kristin is an American (“By birth, not choice,” she says sharply), who left the U.S. when she was 22 and eventually settled in England, where she gave birth to her sons. This all comes out in the beginning, when Peter arrives at his mother’s house in the countryside with his fiancée, Trudi, a physiotherapist who is also American.

Though Simon’s partner Claire also arrives relatively early for the festivities, if they can be called that, there’s no sign of Simon himself until the beginning of the very end of the first Act, when everyone else has already gone to bed. He arrives in the wee hours of the next morning, with a cut hand, and the second act begins when Kristin is removing shards of glass with some tweezers, on the now dimly lit stage. 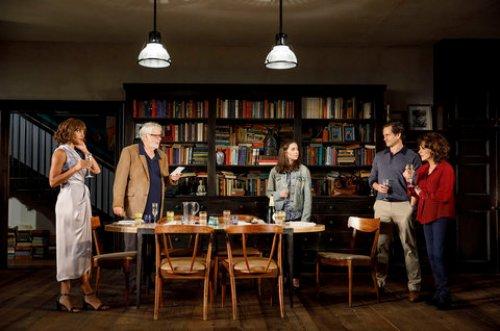 The play is set in 2009, during the last international financial crash, which becomes a specific way of underscoring the differences between Kristin and her children. Consider Kristin asking Peter about “the awful bank you work for… still raping the Third World?” to which Peter responds, “Please don’t moralize. You know nothing about what I do.” For the most part, none of the characters we meet seems to really know what the others do or why they do it. This includes Simon’s partner Claire who’s an actress for a soap opera, according to Kristin, though Claire says it’s not a soap.

There are also sharp emotional contrasts to be drawn by Hugh Dancy, who plays both Peter and Simon, the latter of whom is even more disapproving of his mother. By delaying Simon’s arrival until after the intermission, by which point Peter has conveniently gone to bed, playwright Campbell could have the same actor, plausibly, portray both brothers, much to the benefit of the play and the production.

And as Kristin explains to Trudi, apologia “means a formal, written defense of one’s opinions or conduct,” and it’s “not to be confused with an apology.” But as the circumstances of Kristin’s life unfold, the playwright does, in a sense, apologize for her trespasses.

As directed with a surefire realism by Daniel Aukin, the rest of the cast acquit themselves perfectly of their task, with Talene Monahon as a jejune yet knowledgeable Trudi, Megalyn Echikunwoke as an elegant yet vulgar Claire, and a remarkably witty John Tillinger as Hugh.