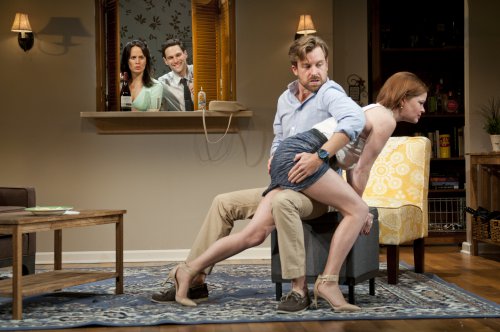 Eric and Cyndy’s marriage is in trouble. He can’t get up the courage to ask the dean for the chairmanship of the computer science department after 18 months as acting head, and Cyndy can’t get her novel started as she watches too much television and drinks too much wine. And worse yet, the spark seems to have gone out of their sexual relationship. When they have dinner with his best friend Zach and Zach’s wife Michelle, they are introduced to CDD, Christian Domestic Discipline, a real life practice, which seems to have spiced up the other couples’s marriage. When Michelle gets out of line, Zach administers corporal punishment.

When this is explained to him by Zach, Eric is skeptical. This is a spank club, he says, and not for him. However, Zach explains that the Bible “asks the man to be head of the household.” As a result, it is his “duty to consistently and clearly enforce the rules.” This is isn’t about sex but for Jesus.  When Eric and Cyndy try it, it seems to be the answer to their prayers. It even seems to help his relationship with his nubile young student secretary Jeanie.  As we eventually find out, both couples’ relationships are in trouble and nothing is what it seems. Instead of marriage counseling, these couples have been substituting religion and CDD. The bottom is yet to fall out.

Robert Askins’ hilarious and engrossing new play is set in Texas just like his Hand to God also produced by MCC Theater at the Lucille Lortel Theatre in 2014 and now on Broadway. And just like Hand to God, this comedy-drama is about needy, unfulfilled people, but this time it is about adults, rather than damaged teenagers. He writes fully rounded characters and clever, believable dialogue that reveals the speakers at all times. Here and in Hand to God, he also deals with fresh subject matter not seen on our stage before. While nothing really shocking happens on stage in Permission between consenting adults, it is most definitely for adults – and prudes should stay home. 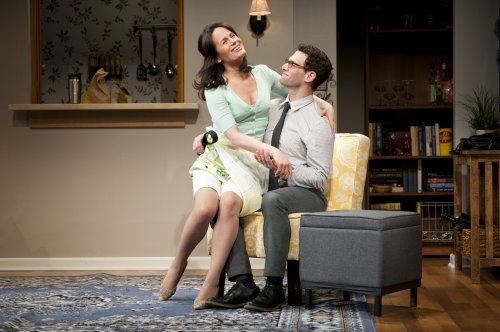 Under the direction of the gifted Alex Timbers (Peter and the Starcatcher, Bloody Bloody Andrew Jackson, Here Lies Love, etc.), the talented cast could not be bettered without ruining the fabric of the play. Heading the high-powered cast is Justin Bartha, best known for his role as “Doug” in The Hangover movies and his Broadway debut as “Max” in the 2010 revival of Lend Me a Tenor. He is excellent as the nerdy confused Eric whose new-found relationship with his wife changes him into a man of confidence. Recently seen as “Karen” in Neil LaBute’s The Money Shot, “Diana Baur” in Mad Men and as “Esme Cullen” in The Twilight Saga, Elizabeth Reaser is very amusing as Cyndy whose behavior is simply an attempt to get Eric to notice her needs and make a man of him.

Broadway and Off Broadway regulars Lucas Near-Verbrugghe and Nicole Lowrance are well matched as Zach who seems to have it all together and as Michelle, his perennially angry wife. Talene Monahon captures the spirit of youth as the co-ed testing her wings – and her powers of seduction. David Korins’ many settings establish the blandness of these people’s lives and it is a wonder where the production fits all the sets in the small backstage of the Lucille Lortel. The costumes by Paloma Young are pitch-perfect for the upwardly mobile folk these characters are attempting to be. Fight director J. David Brimmer’s fine work is much in evidence in the course of the play.

As a follow-up to Robert Askins’ Hand to God, Permission demonstrates that he is an important new voice in the American theater. While not quite as scary or shocking as the earlier play, Permission with Justin Bartha, Nicole Lowrance, Talene Monahon, Lucas Near-Verbrugghe and Elizabeth Reaser is absorbing theater for adults. Go see it: under Alex Timbers’ fast-paced direction, you won’t be bored for a moment.