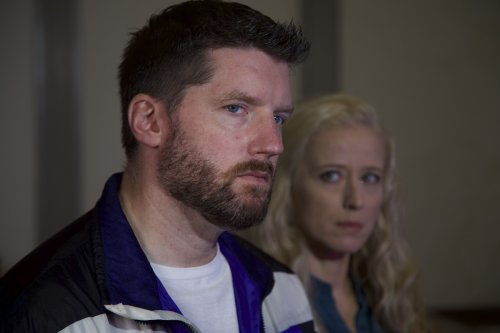 Gregg Prosser and Ylfa Edelstein in a scene from Evan Cuyler-Louison’s A City of Refuge” at The Center at West Park (Photo credit: David Zayas Jr)

Set amidst the backdrop of the very real 1992 Washington Heights riots, A City of Refuge is an otherwise fictional tale of a priest, two parishioners, a cop, an orphan and a stranger who all converge onto a Catholic church during this violent outbreak which was fueled by the killing of a 23-year-old immigrant by a police officer.

Writer Evan Cuyler-Louison strongly insists that the play be staged in a deconsecrated church, and as the director of his own work in this Primitive Grace Theatre Ensemble production, he has chosen the ideal setting of the West Park Presbyterian Church. Jay Daugherty’s set design perfectly complements the huge vaulted ceilings, stained glass and aged pews, providing an excellent playground for Cuyler-Louison’s three-dimensional and immersive staging.

As the audience is seated in the pews, the mood is appropriately established with well-chosen eerie, binaural chords and solo trumpet tones from M. Geddes Gengras’ “Ishi,” underscored by the sound of distant sirens.

The play begins, and we learn that the Chapel at The Shrine of St. Christopher and the Annunciation has given its last service and is being shut down and packed up by Father Barrington (Luke Edward Smith), with the help of lay leader and strong supporter, Kathleen “Katie” Dougherty (Ylfa Edelstein), when others start arriving and complicating matters.

​​The actors in this play give their guts to the piece, forging through the script with high-stakes commitment. 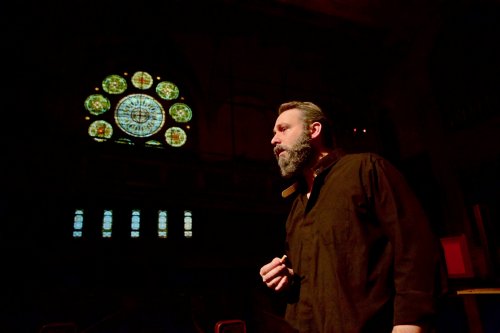 Luke Edward Smith in a scene from Evan Cuyler-Louison’s A City of Refuge” at The Center at West Park (Photo credit: David Zayas Jr)

As the priest, Smith convincingly bullies the rest of the cast with his collar. Written as a hypocritical drunk with a weak heart, he demonstrates Barrington’s physical weakness with more coughing and gasping than is required to get the point across (such manifestations are better served for his final collapse), but he makes his best effort in this role.

Edelstein’s portrayal of conflicted Katie Dougherty, estranged wife of cop Conor Foley (Gregg Prosser), is overbearing at times but her commitment to the story and character are strong.

There is no shortage of drunks in this play, and Prosser’s cop Foley is appropriately entitled, whiny and pathetic as he tries to convince Katie to let him back into her life despite his abuse.

The “stranger,” who initially only identifies himself as “Exile” but later admits his name as Jesse, is intensely played by Miah Kane. 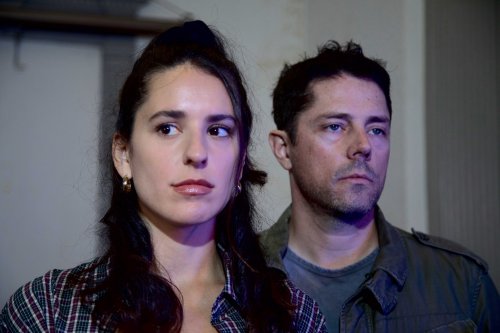 Hailey Marmolejo and Miah Kane in a scene from Evan Cuyler-Louison’s A City of Refuge” at The Center at West Park (Photo credit: David Zayas Jr)

Rounding out the cast is Hailey Marmolejo, who gives an earnest and heartfelt performance as Emma, a foundling left on the steps of the church but now a grown young woman who has come back to the church in hiding.

The story itself has potential, yet despite the actors’ heroic attempts to bring truth to it, the script has its characters written to say and do so many unrealistic things that the core authenticity of what’s unfolding can’t be upheld. Physical and emotional boundaries get crossed in questionable ways, and unreasonable demands are made to unbelievable responses. Characters drop vague references and make mysterious insinuations, demonstrating resentment and distrust in each other without explanation. Understanding who is what to whom just takes too long to be revealed, and the audience must buffer so many mysterious references and unexplained pieces of information for so long that by the time the play concludes with a battery of accusations and revelations, the audience isn’t sure what’s happening and thrown up its hands in disbelief.

The convoluted and hard to follow script might have been marginally more believable if Cuyler-Louison’s direction had given more shape, structure and pacing to the dialogue, transitioning the actors through their exchanges with more veracity.

As ideal as the use of a real church is for the mood and ambiance of the piece, the detriment to this setting is that the dialogue gets swallowed up in the vast space and is hard to hear. The sound, lighting and projection design by Louis Friend provides excellent support for mood and transitions, although the sounds of sirens and external disturbances could be lessened so that dialogue could be heard better given the cathedral acoustics.

The Center at West Park, 165 West 86th Street, in Manhattan

Running time: one hour and 55 minutes including one intermission