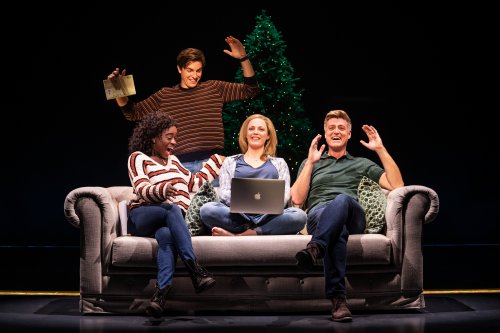 Almost 25 years ago, singer/songwriter Alanis Morissette became a Gen-X icon with the release of Jagged Little Pill, a bracingly honest, coming-of-age album that achieved massive international success for doing something that is still far too uncommon: it took a young woman’s emotional life seriously. The former Canadian teen sensation’s complex, confessional lyrics particularly enthralled female listeners because of their often unapologetic anger, especially on the scathing “You Oughta Know,” a cathartic anthem that gave collective, frustrated voice to what it felt like to be romantically jerked around. Despite the album’s rebellious spirit, it has nonetheless, with the passage of time, become marketable fodder for everyone’s favorite nostalgia delivery-system, the jukebox musical, thanks, of course, to its increasingly middle-aged fans, who presumably have a bit more disposable income in their pockets these days. Isn’t it ironic?

Given the personal nature of Morissette’s artistic output, it might be surprising to learn that the Broadway version of Jagged Little Pill doesn’t take the easy biographical route for its book, mimicking, say, the mega-popular Beautiful: The Carole King Musical, whose subtitle pretty much says it all. Instead, Morissette’s album (Glen Ballard co-wrote the music) and a few of her other songs support an entirely original story from theater-novice Diablo Cody, whose Oscar-winning screenplay for Juno was funny, affecting, and decidedly superficial. This same descriptive mixed bag also holds true for Jagged Little Pill, which rises above typical jukebox musical fare, but not as much as it could have, largely because Cody is interested in hot-button issues, not characters.

Set in that navel of hypocritical dysfunction, suburban America, Cody offers up the Healy family as its reductive embodiment. Boastful Christmas-letter updates aside, the picture-perfect brood’s nuclear facade is starting to crack: dad Steve (Sean Allan Krill) is an inveterate workaholic with a porn addiction stemming from a long drought of marital nooky; wife Mary Jane (Elizabeth Stanley) harbors a couple of agonizing secrets that explain her sexual standoffishness, one of them being a dependence on opiates; son Nick (Derek Klena) is a golden-boy, Harvard-bound jock assiduously living out his mom’s vicarious dreams; and then there’s the slightly younger Frankie (Celia Rose Gooding), Steve and Mary Jane’s black adopted daughter. She’s an impassioned social activist struggling with identity issues pertaining both to her race and sexuality, the latter coming to the fore because of a sensitive new male classmate Phoenix (Antonio Cipriano) who complicates matters for Frankie and girlfriend Jo (Lauren Patten).

It’s a lot of narrative ground to cover, but the undaunted Cody soon adds an even more gut-wrenching topic to the harrowing list: rape culture. During a drunken party, Nick doesn’t intervene when he witnesses his buddy Andrew (Logan Hart) sexually assaulting the incapacitated Bella (Kathryn Gallagher) who chillingly encapsulates her horrific experience in “Predator,” one of two new songs Morrisette wrote specifically for the musical. Like most of the score, it fleshes out thoughts and pain Cody’s script barely even glimpses.

Stanley hauntingly performs the other new Morissette offering, “Smiling,” which director Diane Paulus stages to brilliantly surreal effect. Unlike Cody’s often clichéd movie-of-the-week dialogue, the song provides poetic insight into Mary Jane’s pill-popping spiral. To be fair, though, Cody does satisfyingly use the Frankie-Phoenix-Jo love triangle to set up Patten’s blistering, cri-de-coeur rendition of “You Oughta Know,” which damn near brings the house down. And she also cleverly pokes fun at Morissette’s “Ironic,” notorious for its misuse of the word, by having Frankie present it as a poem to her pedantic creative writing class.

But, as with most jukebox musicals, far too many songs simply don’t connect enough to the surrounding story. At times, it actually seems as if a surprise concert has broken out during a play. Rather than attempt to bring these disparate pieces together, Paulus instead turns into the skid, putting much more creative attention into the production numbers as opposed to what comes between them. 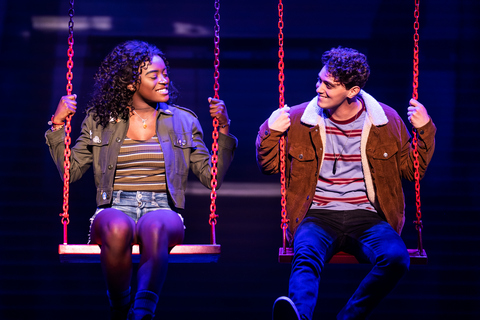 In this regard, she benefits greatly from an incredible chorus, decked out in Emily Rebholz’s slacker-chic costumes, that often looks as if it just stumbled into the Broadhurst Theatre for an impromptu rave under Justin Townsend’s pulsing lights. But its versatile members also must sharply transition into more difficult territory whenever Sidi Larbi Cherkaoui’s alternately loose-limbed and intense choreography is tasked with interpreting the show’s bleaker themes. It’s all a whirl of sights, sounds, and emotions, but one that is somewhat stabilized by Riccardo Hernández’s almost cinematically agile set, which mostly consists of moving panels that become screens for Lucy Mackinnon’s video projections of various locales, like the Healy’s quintessentially upper-middle-class home.

Unfortunately, Paulus, her design team, and the game cast just can’t overcome the singular voice Morissette brings to so many of her songs. Maybe the much less ambitious choice of Jagged Little Pill: The Alanis Morissette Musical was the only real solution to the problem.