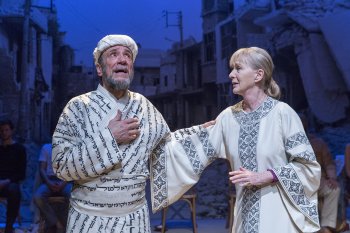 Director Brian Kulick works very hard to re-cast the intricately plotted eighteenth century Gotthold Ephraim Lessing play, Nathan the Wise into a relevant and pointed commentary on Twenty-first Century Middle East events.  That he succeeds as well as he does speaks well for his imaginative take on the play, helped by his cast of game, gung-ho actors and the new translation by Edward Kemp which reduces the running time from four and a half hours to just over two.

It’s an uneasy stretch that ultimately fails to convincingly conflate the surprisingly liberal religious arguments that Lessing makes with the extraordinarily complex political/religious/cultural impasse in today’s Israel.  The interactions between the Christian, Muslim and Jewish characters are frank, barbed and boldly modern sounding—at least in Kemp’s version—but come across more as statements of the class structure of eleventh century Jerusalem than deep-seated psychological or sociological issues.

The ultimate, insurmountable problem is the bizarrely melodramatic and complicated plot turns used by Lessing.   In a series of surprise reveals, several of the characters become not exactly what and who they at first appeared to be.  The astonished reaction to the climactic revelations is far stronger than any deeper political reading could ever be.  Lessing’s whirlwind of disclosures is, unfortunately, unwieldy and oddly too ridiculously droll to milk any deep meaning from Nathan the Wise.

Scenic designer Tony Straiges and costumes designer Anita Yavich provide the most obvious allusions to contemporary Israel, with Mr. Straiges’ giant backdrop photograph of a modern, bombed out street (complete with rooftop TV dishes) and Ms. Yavich’s modern street wear over which very witty period style robes and gowns are worn.  Straiges uses colorful rugs and other bits and pieces to imply ancient Middle East while Yavich’s costumes are decorated with texts in various ancient languages, including an astute bit of Hebrew in the form of a menorah on Nathan’s robe.  Joe Novak’s lighting turns the small CSC space into a series of connected acting spaces.

The year is 1192 and the place is Jerusalem.  Nathan (F. Murray Abraham in a finely nuanced performance) has just returned from a lucrative business trip only to learn that his beloved daughter, Rachel (a slightly colorless Erin Neufer) has been saved from a devastating fire by a Christian Templar (a similarly bland, but nice looking Stark Sands).   Despite their religious differences, the Templar falls for Rachel. 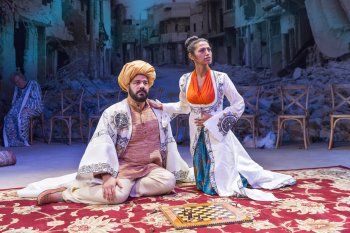 Austin Durant and Shiva Kalaiselvan in a scene from “Nathan the Wise” (Photo credit: Richard Termine)

Daya (Caroline Lagerfelt, in a strong showing), a Christian, cares for Rachel, strongly favoring the Rachel/Templar match.  Daya longs to return to Europe, a desire that colors her subsequent actions.  (Lagerfelt also plays an evil Patriarch of the Catholic Church who has it in for Nathan.)

Skulking about the storyline is Al-Hafi (George Abud, perfectly and self-centeredly wily), the newly appointed financial advisor to the Muslim leader, Saladin (a robust Austin Durant).  Al-Hafi works hard to broker a loan agreement between Nathan and Saladin, hoping that Nathan’s riches will keep a very unsteady status quo steady.  Saladin’s sister, Sittah (Shiva Kalaiselvan, charming in a peculiarly underwritten role), a voice of reason whispering into her brother’s ear, is also attracted to the Templar.

Brother, the remaining character, is played by a crusty, physically distorted John Christopher Jones as a kind of Greek Chorus, on the outskirts of what becomes a very messy, almost impenetrable plotline.

The acting was easygoing with no effort made toward period stylization in a vain attempt to keep a modern rapport between them and the audience.

As a curiosity, Nathan the Wise is fine theater, but as a comment on current events, it is sorely lacking, despite a first-rate production.

Running time: two hours and five minutes including one intermission