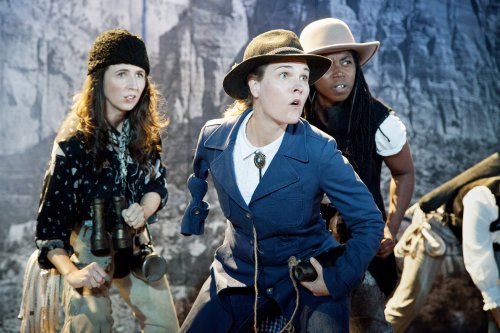 In this swashbuckling comedic play, Men on Boats takes an innovative approach by casting ten women in the roles of the first “white” discovers of the Grand Canyon. However, this was not a nod to the current trend of casting cisgender or transgender actors. The use of “on boats,” instead of “in boats,” indicates the state of being in which the actresses find themselves — a history panorama where gender and race play little part.

The focus are the characters — an on-target ensemble of actors — brave, stalwart adventurers, who risked life and, in one case, limb (one-armed leader John Wesley Powell), to chart undiscovered territories in 1869. Though this compelling play would have worked just as effectively if the roles were to be played by men, boundaries between male and female are quickly forgotten as this delightful, fast-pace drama unfolds.

Playwright Jaclyn Backhaus’ exacting research is evident. Much of her play is based on Powell’s 1869 journals and subsequent book, The Exploration of the Colorado River and Its Canyons. She captures both the picturesque territories traversed, as well as the human moments between the crew. Backhaus’ witty dialogue and humorous touches efficaciously lures you in, but never resorts to being over-the-top or camp.

Director Will Davis’ clever decision to use only the front part of the boat (instead of a full boat) — four portable prows — allows the actors to be easily choreographed on both land and river. Davis fluidly weaves the band of explorers’ interactions, in and out of both treacherous white water and a calm respite on the river embankments. Utilizing ropes and strategic body motions, life-threatening situations are wonderfully displayed. Both on land and on river, Davis shows the pioneers’ survival instincts, camaraderie and dissention with great aplomb. 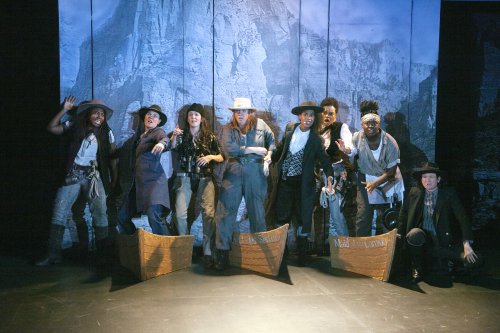 The Cast of “Men on Boats” (Photo credit: Elke Young)

Ripping around one river bend after another, unusual bonds between the crew are created in navigating the unknown waters of the Green and Colorado Rivers. Kelly McAndrew balances a strength-under-pressure composure with sensitivity as brevet Lieutenant Colonel Powell (who preferred to be called “Major”). Powell constantly has to maintain a balance among the disparate crew, and McAndrew keeps the group (for the most part) on course.

Other stand-out performances are Hannah Cabell (OG Howland, a hunter by trade), Donnetta Lavinia Grays (Sumner, a professional guide) and Layla Khoshnoudi (Bradley, a soldier who agreed to journey with Powell in exchange for an Army discharge).

Sets by Arnulfo Maldonado are minimal but adequately convey the undiscovered, beautiful wilderness — background images of the changing landscape and rivers, in addition to the four half-boats. Lighting designer Solomon Weisbard aptly creates an effective ambience relative to the surroundings and beautifully highlights the mood among the players. Ásta Bennie Hostetter’s costumes are spot-on Old West trailblazer. Jane Shaw’s sound design – from her drum beat rhythms to her instrumental to her other incidental music – punctuates the immediacy of the drama.

Kudos to Clubbed Thumb for originating this spirited and intelligent production of Men on Boats. (The play began at the Wild Project as part of their 2015 Summerworks festival). Men on Boats is a finely-tuned adventure that transports you back to a time when the wonders of discovery still existed and heroes/heroines were the backbone of a nation.