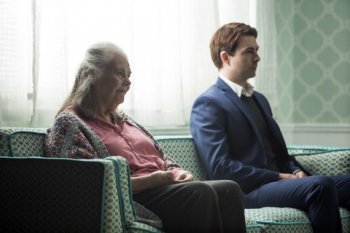 As if it were a Twilight Zone episode written by Edward Albee at his most rococo, Jordan Harrison’s Marjorie Prime is an arch and tedious exercise in futuristic science fiction.  Its pedigree of being a 2015 Pulitzer Prize for Drama finalist only calls attention to the often questionable decisions made by that body.

I remember you didn’t put your napkin in your lap.

And your beard was nearly to the floor…Like the guys from ZZ Top.

Was that a band?

Other lazy and superficial pop culture references include a lengthy analysis of My Best Friend’s Wedding, chats about Casablanca, Rosemary’s Baby, and the elderly Marjorie’s amazement at having Beyoncé’s song “Single Ladies (Put a Ring on It)” stuck in her head and reciting its lyrics.  Cristo and Jeanne-Claude’s 2005 Central Park installation “The Gates” is cryptically cited.  Second-rate filler epigrams such as “Honesty – The secret weapon of the elderly,” “We’re West Coast WASPS.  We don’t do therapy,” and “I like sedimentary layers. It means it’s all still there” abound.

It is the mid-21st century and the 85-year old Marjorie (born in “1977. It sounds like the Middle Ages, doesn’t it.”) is in declining health and has had to give up her home of many decades. She now lives in an airy and cheery facility.  She shares it with a “Prime,” a hologram in the form of a young incarnation of her husband Walter who died ten years earlier.  He is programmed with their shared memories and provides meaningful companionship.

Her 55-year-old daughter Tess and her middle-aged husband Jon often come to visit.  This provokes a lot of family secrets and conflicts including the standard mother daughter variety.

Halfway through, there is a jarring plot twist followed by another one and these only magnify the play’s hollowness as it reaches its pretentiously philosophical conclusion.   Ostensibly the playwright is offering profound observations about life itself.  “Living is a distraction from death.” 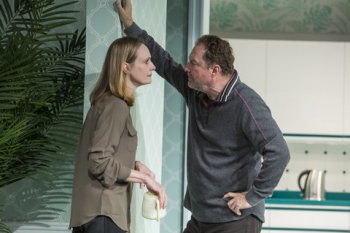 While the play rests on a technology more advanced

than what we’re accustomed to, I don’t think of it

as science fiction – at least not the predictive

sort.  From the author’s contradictory notes.

Playwright Jordan Harrison is a graduate of the Brown University M.F.A. program and the recipient of several prestigious awards such as a Guggenheim Fellowship and the Kesselring Prize. On a technical level Marjorie Prime is expertly constructed and contains serviceable dialogue that propels the plot, but in totality it never rises above the level of an academic contrivance.  The premise is a familiar but promising one, but in execution it is flat.  The exposition and setup never really become emotionally involving and the closing revelations are consciously sensationalistic.

At this point in Lois Smith’s illustrious career any appearance by her onstage is cause for celebration by theatergoers.  As Marjorie she utilizes her plummy, staccato voice and luminous presence to bring depth, entertainment and focus to the role. Ms. Smith as always elevates whatever she is in and is this production’s prime virtue.

New York stage veteran Lisa Emery’s lovely solidity and charm allow her to fill out the part of the contentious daughter Tess with her talents.  As the put upon son-in-law, the distinguished and familiar character actor Stephen Root uses his wry delivery and emotional range to bring flair to the difficult part of Jon that carries much of the dramatic weight of the play.  Noah Bean with his boyish handsomeness and robotic cadences makes a perfect Walter during his periodic appearances. 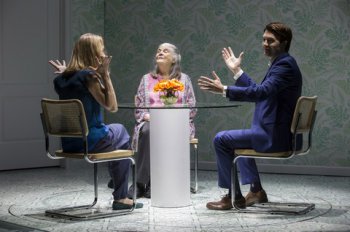 The lighting design by Ben Stanton and the sound design by Daniel Kluger both efficiently contribute to the production’s subtle futuristic effects during the scene transitions.  Costume designer Jessica Pabst’s clothes for the characters are purposefully ordinary garments though Walter’s gleaming cobalt suit is quite visually arresting.

“I Sing the Body Electric” actually was a 1962 Twilight Zone episode about a widowed father who selects a grandmotherly android to look after his three children.  It was the only one written by the monumental science fiction author Ray Bradbury.  He wrote it as a short story in 1969 and in 1982 he adapted it into the hour-long television movie The Electric Grandmother starring Maureen Stapleton.

Robot and Frank is a 2012 futuristic film starring Frank Langella as an elderly retired jewel thief whose son gives him a robot for companionship.

Marjorie Prime is in the well-trod sci-fi tradition of humans interacting with automatons.  That concept has been rendered far more effectively in numerous films and television shows.   This treatment is derivative and stilted and its strong and tender performances are not enough to redeem it.