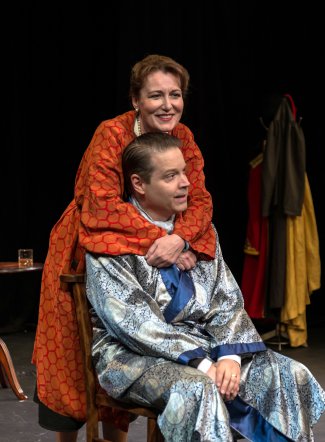 Playing famous people is always a challenge but playing legends is even more difficult. Everyone has his or her own idea of what they were like and if film clips or documentary footage exists, there is evidence of the originals with which to be compared. Alison Murphy and Mark E. Lang, a real life married acting couple who have worked together for 15 years, have chosen to play the title roles in Lang’s play, LUNT AND FONTANNE: The Celestials of Broadway. While now in eclipse, the Lunts, who only made one feature film, may be forgotten by the theatergoing public but are still considered the pre-eminent Broadway acting couple in American theater history. One admires Murphy and Lang’s courageousness and fearlessness in recreating these legends, but the results are a mixed bag.

The Lunts were both Broadway stars (he for the title role in Booth Tarkington’s Clarence, she for the title role in Kaufman and Connelly’s Dulcy) when they fell in love in New York in 1920. After their marriage in 1922, they eventually insisted on always working together, appearing in 27 productions, two Hollywood films, and three television dramas. The only film in which they co-starred, Molnar’s The Guardsman, was a movie version of their first stage hit together, and for which they were both nominated for the Academy Award for acting.

While they were later criticized for spending much of their time in drawing room comedy and losing out on appearing in Arthur Miller’s Death of a Salesman, they did appear in plays by Shakespeare, Chekhov, Shaw, and O’Neill and in plays written for them by most of the leading playwrights of the day: Noel Coward, Maxwell Anderson, Robert E. Sherwood and S.N. Behrman. Before they retired in 1960 after 36 years on the stage opposite each other, they had appeared in two Pulitzer Prize plays, and Lunt had received two Tony Awards, one for acting and one for directing.

While LUNT AND FONTANNE: The Celestials of Broadway is a fine and concise review of their careers for people who have never heard of them, Murphy and Lang make them seem more superficial than necessary. It is true that Fontanne was born in England, but Murphy and Lang play both of them as very English and exceedingly refined and proper, not backed up by their performances as themselves in Stage Door Canteen. The Lunts’ famous use of overlapping dialogue which was years ahead of its time can be seen in the video of their film of The Guardsman. Murphy and Lang often use it to talk over each other’s lines making them unintelligible, while the Lunts came in on the last syllable of their cues which is much more realistic. The Lunts may have appeared in many light drawing room comedies, but to portray them as delivering their lines on the same level all time would not have made them as famous as they were. 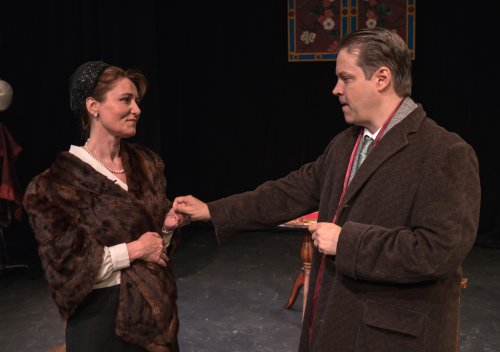 Lang’s play gives a compact and lively review of their remarkable career. The play begins on May 5, 1958 as they await their final opening night in Duerrenmatt’s The Visit, an uncharacteristic contemporary play for them, and the same night that New York’s Globe Theatre was to be renamed The Lunt-Fontanne in their honor. The play then flashbacks to 1922 when they decide to get married. Along the way they both narrate their careers and rehearse scenes together as though the audience is not there, which becomes rather disconcerting.

Murphy and Lang perform in moments from some of the Lunts’ greatest hits: The Guardsman, The Taming of the Shrew, the Pulitzer Prize-winning W.W. II drama, There Shall Be No Night, and S.N. Behrman’s I Know My Love (surprisingly, referenced in Salinger’s The Catcher in the Rye.) However, the scenes are neither well-chosen nor placed in context within these plays. In the course of the evening, Lang impersonates Noel Coward, Laurence Olivier and Marlon Brando which are ironically more convincing that his Lunt. In some of these scenes, both he and Murphy play both the Lunts and other characters (she plays Vivien Leigh) simultaneously by adding and removing costume accessories which is rather distracting.

Nevertheless, the play does have its entertainment value. Among the more delicious anecdotes included are the criticism that no other actors could compete with them as they “even rehearsed in bed” and that it was Olivier who nicknamed them the “Celestials of Broadway.” As they were turned off by the wasted time in filming and the photographing of scenes out order of the script, Lynn famously wired Universal producer Carl Leammle when they were later offered a fabulous contract, “We can be bought, but we can not be bored.”

The Lunts are amused to find that they are the inspiration for “Fred” and “Lillie” (Lynn’s real first time) in Cole Porter’s musical version of The Taming of the Shrew retitled Kiss Me, Kate. Childless by choice, they discover Montgomery Clift and considered themselves his “real parents.” We discover Alfred’s nervousness and stage fright and Lynn’s often whitewashing the truth and creating a back story of her own making.

Viviane Galloway and Jessa-Raye Court are responsible for the several costume changes, while Eric Gersten has written the appropriate music which punctuates many of the scenes. Becky Heisler’s lighting design always directs attention where it is needed while Richard Froehlich’s sound design has some surprises of his own.

As directed by Owen Thompson, LUNT AND FONTANNE: The Celestials of Broadway is a polished production which does not quite live up to its lofty ambitions, but will inform those who are unaware of the facts of their career.

LUNT AND FONTANNE: The Celestials of Broadway (through August 27, 2016)