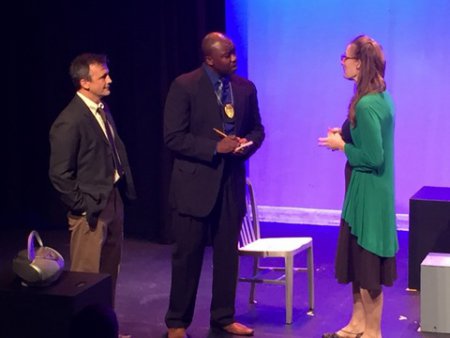 John Isgro, Jamil A.C. Mangan and Elizabeth Alice Murray in a scene from “To Protect the Poets”

To Protect the Poets shows how readily lines can be crossed when “street justice” is employed, instead of the judicial system. This first-rate, timely and intelligent play is a just representation of how two people who love each other deal with violent crimes against women and police brutality.

Mac, a middle-aged teacher, a poet and an idealist, instructs inner-city high school students. She falls for Jab, a 40ish police detective, and he with her. Jab has a strong sense of integrity and duty, but he also has anger management issues. Their relationship and views on justice are tested when a young woman from Mac’s neighborhood is sexually violated and murdered, and Jab is called in to investigate the homicide. Playwright John Doble’s keen sense of dialogue and character development enhances the balanced portrayal of two different points-of-view, that of Mac’s and Jab’s.

When asked where the title, To Protect The Poets, came from — a quote from a famous poem or Shakespeare — Doble replied: “I did not have a particular quote in mind. Only Jab’s idea that poets are almost like angels — the best among us but also vulnerable, and therefore in need of the greatest possible protection. Mac, of course, thinks that poets are made of sterner stuff.”

Alberto Bonilla directs the play with great sensitivity, drawing upon his sister’s expertise and insight as a Prosecutor in order to aptly convey how horrendous crimes can be perceived and how taking justice into one’s own hands is not a viable solution. In the To Protect The Poets playbill “notes,” Bonilla states: “There are lines we draw for ourselves morally, ethically and spiritually. It’s much easier to hold those lines when faced with an opposing view from someone whom you do not care for. However, when that opposing belief comes from the one person you love, it can tear your soul in two. Some things you can compromise on, others you simply can’t.”

The play opens with Jab (an energetic and superb John Isgro) and his African-American partner, Bear, (an erudite and calm Jamil A.C. Mangan) being called to a warehouse crime scene — a grizzly slaying, where the woman was raped and tortured. Jab takes this crime personally, and his short fuse is tripped; he promises his partner he will not only find the perpetrators, but “nail ‘em good.” Isgro’s performance is subtly and wonderfully nuanced. He balances Jab’s pride in being Polish with self-deprecating humor — making fun of his lack of book learning, but confident in being street wise and his detective abilities to solve crimes.

The setting then shifts to Mac’s classroom (Jason Fok’s lighting allows the transitions between the scenes and locations to happen effortlessly), where she is helping high school dropouts prepare for their GEDs. Mac (Elizabeth Alice Murray) quotes Shakespeare’s Romeo and Juliet trying to explain to her students why “passion,” not just love, is key to their relationship. The playwright’s reference to both Romeo and Juliet and passion foreshadow complications to come in Mac’s and Jab’s relationship. 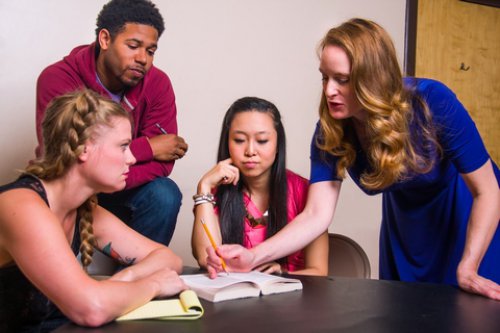 Mac and Jab are attracted to each other from the get-go. Murray beautifully expresses the essence of Mac and what immediately draws Jab to her — a caring spirit and having the heart and mind of a poet. Though a bit shy, it is Mac who takes the first step in approaching Jab for a “date.” Murray and Isgro are engaging in their awkward and tentative romance, conveying the anxiety of mutual attraction between two opposites.

Mac’s ethnically diverse students (Joy Donze as Courtney, Ariel Kim as Mingzhu and Deshawn Wyatte as Jamal) use hip- hop banter in order to cover their insecurities. They are believable as troubled and damaged teenagers, but who have the where-with-all to want a better life and education. Their back and forth repartee adds humor to otherwise dark scenes of a murder investigation.

One of the most poignant and uplifting scenes of the play is when Mac’s students reenact “the balcony scene” from Romeo and Juliet. Their joy of learning something special and mutual trust in each other is evident. They perform the Shakespearian scene with verve, liveliness and playful teasing of each other. The students challenge Mac but respect her. And, in a pivotal moment in the play, they show Mac that they are truly concerned about her well-being.

However, despite Doble’s knack for dialogue that captures police shop talk and how a poet uses words, there are times when his ghetto slang seems old-fashioned. Hip-hop jargon changes frequently; what is current today is often out-of-date tomorrow. Some of the words the students use feel more 2006 than 2016 and need to be updated.

Also, the ending is contrived; Mac’s “choice” of unpacking the novel, Crime and Punishment, is too in your face. Up until the last scene, Doble doesn’t telegraph life-altering decisions. He doesn’t need to resort to the final moment being “do you get it.”

To Protect the Poets is part of The 20th Annual New York International Fringe Festival — FringeNYC. FringeNYC is often considered the premier festival for new plays, not only in New York but in the country. To Protect the Poets is a remarkable, thought-provoking and important addition which continues this Festival’s venerable two decade tradition of selecting diverse and interesting worthwhile plays.

Teatro SEA at the Clemente (Venue #1), 107 Suffolk Street, between Rivington and Delancey Streets, on the Lower East Side, in Manhattan