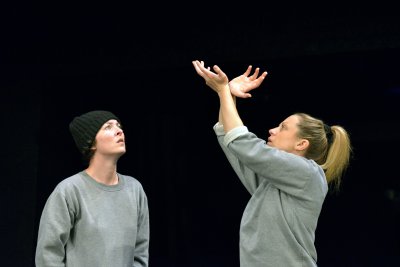 Based on the true stories of imprisoned British women, Key Change is a moving and highly theatrical kaleidoscopic factual drama that makes a great impact in one hour. Playwright Catrina McHugh has crafted a richly detailed confessional examination of four women’s lives that are told with fierce candor and biting humor.

The play isn’t a political treatise that takes sides for or against prison reform or heavy-handedly condoning or condemning the actions of its characters.  It simply has the women tell their stories and lets the audience draw their own conclusions about matters other than the narrative.

I wish for two years to go quick

That’s I’m not ill and off meth’s

I get my kids back

My kids grow up happy and normal

I wish that when I get out, to be a normal mam

I wish everyone wealth and happiness

To have my life back where I started

Kelly, Kim, Angie and Lucy are of different ages and are serving varying sentences for crimes involving drugs and thievery.  Poverty, spousal abuse and their children are among the things they have in common.

The stage is bare with black walls and a black floor, some black chairs and a table off to the side where Lorraine the stage manager sits with a CD player that occasionally plays the show’s loud evocative music.  When the audience enters, the women gradually appear onstage and mill about and chat with each other.  Eventually they speak to the audience holding rolls of white tape while they put strips of it onto the floor to indicate their cells. 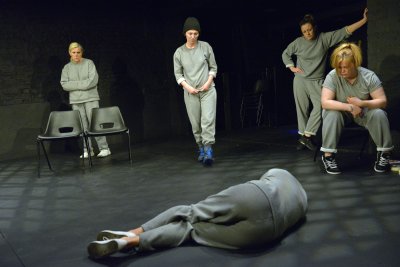 Director Laura Lindow’s staging is a thrilling exhibition of pure stagecraft using very simple elements.  The expressive actors are choreographed at times often in arresting tableaus especially a scene depicting drug addiction.  There are powerful sequences visualizing violent clashes, flashbacks, fast-forwards and fantasies.  A quite poignant one involves the complications of using the telephone in prison to keep in touch with loved ones. The pace is fast and vibrantly conveys the emotions of the characters’ situations.

Lighting designer Ziggy Jacobs-Wyburn and composer and sound designer Roma Kagnik’s creative work contributes greatly to the production.  Black outs, dimness, brightness, and strobe effects coupled with the frenetic score are melded into a haunting sensory accompaniment to the narrative.

Christina Berriman Dawson, Cheryl Dixon, Judi Earl and Jessica Johnson are the four prisoners.  All give bold, fearless, and heartbreaking performances. Victoria Copeland plays the stage manager and she expertly supports the company.

The female-centered Open Clasp Theatre Company was commissioned by a British arts project to create this play based on the lives of women in Her Majesty’s Prison Low Newton.  It was later performed in men’s prisons to highlight the situation of women, as well as being performed at The Edinburgh Festival Fringe in 2015 where it won the Best Edinburgh Award.  The Carol Tambor Theatrical Foundation is presenting this U.S. premiere in New York City.

With its strong writing, masterful presentation and intense performances, Key Change is an excellent work of social consciousness theater.