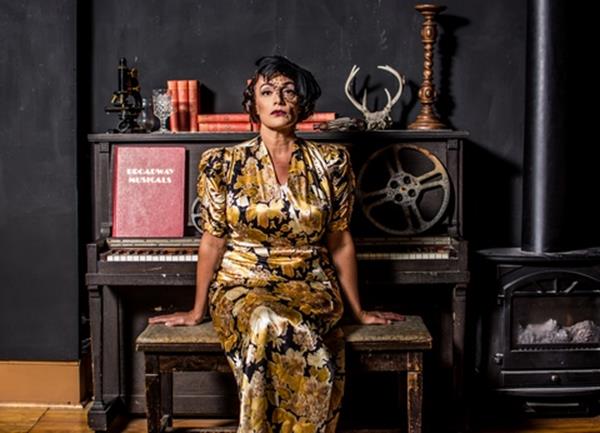 Excuse My Dust (A Dorothy Parker Portfolio), an hour-long diversion performed by Jennifer Engstom at the SoHo Playhouse, presents a handful of monologues adapted from Parker’s comic prose.

Dorothy Parker (1893-1967) was famously a creature of infinite jest; even her obituarists could not resist “Men seldom make passes / At girls who wear glasses.” But that trivial quip nevertheless points to the deeply painful source of her comedy, namely the peculiar futilities of woman’s lot.

Most of the pieces will be familiar to the readers of The Portable Dorothy Parker: “The Garter,” “A Telephone Call,” “The Waltz,” “Just a Little One,” “The Taxi,” and a few poems. This is supplemented with bits from more ephemeral work, such as her book reviews.

The common note in all these sketches is that the women must accept passivity, always waiting for men to ask them to dance, call them on the phone, buy them a drink, or propose. Even the show’s title, Excuse My Dust (Parker’s suggestion for her own epitaph) is typically on-target and neatly self-effacing. Her wit is inspiring, unsparing, as lethal as ever.

Ms. Engstrom, together with director Darren Lee Cole, have found a manner of presentation which suits the material perfectly, evoking Parker’s contemporary Ruth Draper, the greatest monologist of her time. The difference is that Parker is writing her characters’ stream of consciousness, rather than her stream of words. In “A Telephone Call,” the narrator sits by the phone waiting with increasing vexation for a man’s promised phone call. “The Waltz” takes us through the tedious and sometimes bruising trial of dancing with a clod. “The Taxi Ride” shows us post-breakup misery as she finds that seemingly every corner and every street has sad associations to her lost love.

That last includes one of my favorite, if arcane, lines. In the throes of writing bad poetry, a woman muses that “Sorrow is tranquility remembered in emotion. Oh, that’s good,” which happens to be a parody of Wordsworth’s suggestion that poetry was “emotion recollected in tranquility.”

In all but one piece, Ms. Engstrom found just the right tone, as these women are just ridiculous enough for us to see the absurdity in their situation and yet human enough to avoid our contempt. In “The Garter,” however, used to provide a unifying thread through the evening, the character is Dorothy Parker herself, and she comes across as depressed and self-pitying when a touch of quiet rage is called for. Perhaps a level teaspoon of that anger–also known as “New York edge”–would benefit every one of the characters. After all, Parker was one of the writers whose attitude defined the very idea that to be a New Yorker meant to be at least a little mad (in every sense). That missing edge may be why the sixty-minute entertainment seems both as much as one would like, and yet not enough to feel a full statement. It would also naturally pick up the pace in the (very few) spots where it slackens.

There is a problem with the performance space, a small downstairs bar. While it does suggest a 20’s speakeasy, Parker’s characters are not comfortable with strangers at close quarters, and Ms. Engstrom would have benefitted from a little more room to maneuver between the chairs. Sound cues varied from good (the pre-show featured multiple layers of songs from the 1920’s, as if recalled through a hangover), to middling (a Chopin Waltz isn’t really right for “The Waltz”), to ill (a bit of New Age piano noodling when “The Taxi” rider slips into reverie).

Easy to recommended if you want a light entertainment in Soho, but it might be more fulfilling as the first half of a double bill.

Excuse My Dust (A Dorothy Parker Portfolio)(through November 9, 2014)
SoHo Playhouse Huron Club, 15 Vandam Street, between Varick and Avenue of the Americas, in Manhattan

For tickets, call at 212-691-1555 or visit http://www.SohoPlayhouse.com
Running time: one hour with no intermission.