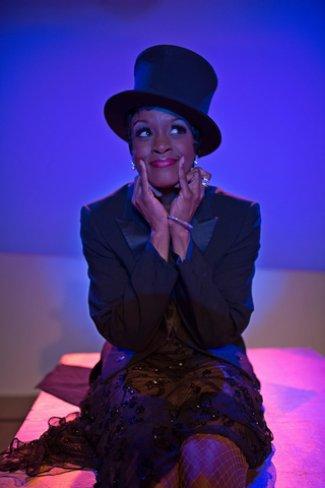 Subtitled “a burlesque cabaret dream play,” Josephine is more. It is a full-fledged musical with grit, sex, color and ebullient dancing, all supplied by the remarkable Tymisha Harris who gushes with love and truth about her subject, the legendary Josephine Baker.

Josephine begins appropriately with the song “J’ai Deux Amours” (“I Have Two Loves”) which summarizes Baker’s passion for Paris, the city that adopted her in the 1920’s, and her birth country, the United States which repeatedly treated her as a second class citizen.  Even after she became an acclaimed artist, she was disrespected egregiously at the Stork Club where the staff refused to serve her in the 1950’s.

Harris begins at the beginning, Baker’s life of dreary poverty in St. Louis, Missouri, where she was born in 1906.  At an early age, she came upon a medicine show where she improvised a ragtag dance, won a buck and was on her way, transforming herself from Frieda J. MacDonald to Josephine Baker via several doomed marriages, including a first at thirteen. A stint in Shuffle Along on Broadway led to a gig in Paris and the rest, as they say, was history… 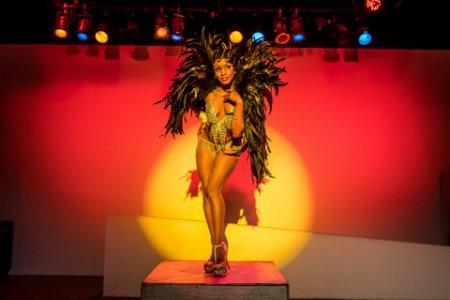 Only there was much, much more to Baker’s outsized life, and this show, created by Harris, Michael Marinaccio and Tod Kimbro (also responsible for the book and musical direction), does a good job of not white-washing the events of Baker’s life.  It entertains, but also isn’t afraid of Baker’s darker moments:  dealing with the bleak contrast between the respect she received in France and the fact that she couldn’t enter her New York City hotel except through the kitchen door; her little-known career as a spy for the underground during World War II; her lack of success with her lovers and mates—both male and female—including Giuseppe Pepito Abatino who sculpted her career, for better or worse; involving herself whole heartedly in the Civil Rights movement; adopting a batch of orphans (one of whom was the proprietor of Chez Josephine in the Theater District), and the financial disasters that family brought her.

The main event, however, is the performance of Harris who doesn’t just imitate Baker but uses her own gifts to illuminate the multitalented cult figure.  It’s as if Baker has brought out the best in Harris and she returns the favor with her vivid singing, unabashed dancing and direct connection with the audience.

The songs include well-known ditties like “I’m Just Wild About Harry,” “Ain’t Misbehavin’,” “Blue Skies,” a particularly moving “And Then I’ll Be Happy,” “Minnie, the Moocher,” the Civil Rights anthem “Strange Fruit,” “The Times They Are A-changing,” and a heartbreaking “La Vie en Rose.” 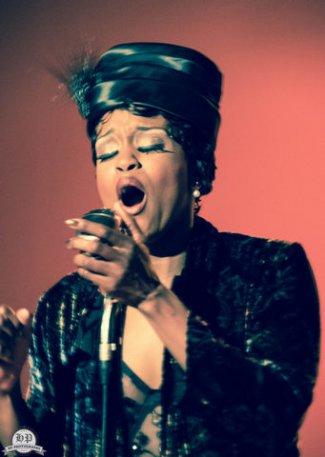 And, of course, Harris gives the audience a sassy, quite explicit version of Baker’s “Banana Dance,” performed wearing just a skirt of plastic bananas.  The jiggly, titillating choreography was created by Harris

The costumes, also by Harris, range from adequate to complexly theatrical.  The set by Marinaccio features a screen for quick changes and several performing spaces, all lit by Marinaccio and Gregg Bellon.

Running time:  80 minutes with no intermission