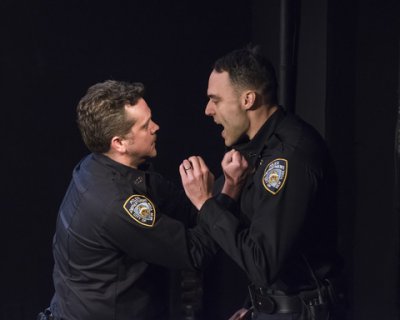 At the onset of the production, each cast member is introduced by walking onto stage one by one. Starring intently out into the audience, there is a general sense of unrest to be found behind the eyes of each performer. The house lights of the theater are still on, and the piercing gazes coming from the actors scattered across the stage immediately destroys any notion of a fourth wall. The fourth wall, the theatrical device that the audience can usually hide safely behind, is taken away from the audience before the production even begins. There is no question: from the time the very first actor takes the stage, it is established that the audience is just as responsible for the events of Barry Malawer’s Dead Dog Park as any one of the fictional characters in the story.

As the final character in the cast takes the stage and slams the stage door hard behind him, the house falls dark in a single lighting cue, and the dialogue begins. Meet Rob McDonald, a seasoned New York City Metro Police Officer first seen pacing the stage frantically. His partner Ricky Romero is there to offer a slight sense of comfort but is overall at a loss for words. Rob and Ricky, played by Tom O’Keefe and Migs Govea respectively, have just arrived back at the precinct with a disaster on their hands.

The O’Keefe/Govea duo were responding to a call over the radio: two boys were seen throwing rocks at an abandoned building in Brooklyn, and so the pair went to investigate. As the officers arrived on the scene and approached the young boys, both youths ran into one of the buildings. The pair of officers pursued and followed the two into the building. The boys took off in different directions, and the partners were forced to split up in order to continue the search. As Govea chased his target all the way onto the roof of the building, O’Keefe followed his to the fourth floor of the building.

What happened next is the single defining event of the entire play. Somehow, O’Keefe’s target, Tyler Chapin, fell out of the window from the fourth floor and is now in the hospital in critical condition. It is unclear if he will ever walk again. Did the 11-year-old boy fall out of the window by himself, or was he pushed by the pursuing police officer? Following the events of the proceeding trial and investigation, Dead Dog Park asks the audience to decide. 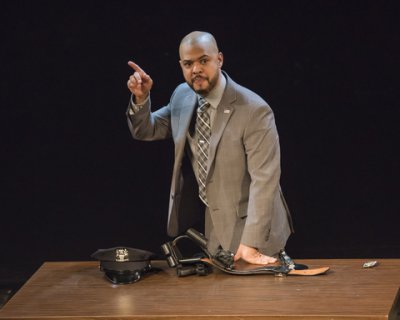 Presented in a minimalist manner, John McDermott’s set design is intentionally bare-boned. In fact, the only stage dressings present are a large metal table in the middle of the room, and a few chairs scattered about—enough for all of the members of the cast to be seated upon, and no more. A skylight hangs in the middle of the room, suspended in the air directly above the metal table. This is the only attempt by the creative team to give any sense of location—that of an interrogation room. Scene transitions are performed not by black outs but by actors rotating and shifting around to different corners of the stage to establish their new environment. Lines in the script that have to do with activity, such as drinking coffee or putting on a shoe, are essentially overlooked. Anything that steals focus from the performances and the story, any distractions, are eliminated entirely.

This style of direction from Bedlam’s artistic director Eric Tucker successfully adds to the weight of this complicated your-word-against-mine story. With everything stripped away, the actors are left to rely on their rawest emotions and instincts. The results are effective, and Tucker has crafted a production which is brimming with vulnerability from the small cast of six.

O’Keefe’s troubled officer is a compelling anti-hero. Rob McDonald is an enigmatic individual: despite what everyone else around him thinks, and regardless of the truth about his dark past, he is unflinching in stressing his innocence. Susannah Millonzi, who plays O’Keefe’s troubled wife, delivers a riveting performance as Angela McDonald, a woman who wants to believe her husband but can’t shake the fear that the man she loves has committed just the opposite action.

Eboni Flowers as Sharonne Chapin, mother of the victim, is a powerful presence on stage. Flowers portrays a mother with utterly incomprehensible motivations. Flowers’ agony and pain based in the fear of losing her son is translated into an unforgiving attitude, one that is equal parts blind rage and “Justice for All.” Flowers’ Chapin is disgusted, disappointed, but above all else hurting for both her and her son. The attorney hired to represent her son in court, Ryan Quinn’s John Jones, is—in his own words—maybe not the best attorney out there, but he is certainly the loudest. Quinn lives up to this reputation, and delivers an electric monologue in the closing minutes of the production which sucks all of the air out of the theater.

Dead Dog Park by Barry Malawer is a powerful new play which is full of empathetic and complex characters. Backed by outstanding direction from Eric Tucker, this minimalist production addresses a touchy issue which is all too relevant to the times at hand.