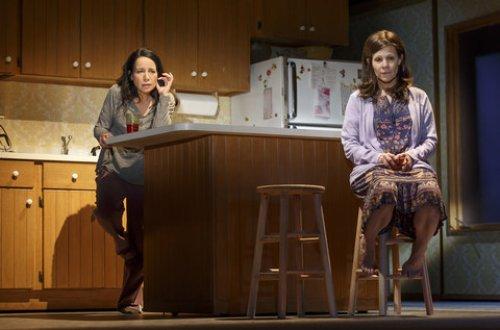 Though you occasionally hear him mumbling and even see his shadow behind a glass-brick wall, Marvin never really makes an appearance in the play that bears his name. The main character in Marvin’s Room is rather Marvin’s daughter Bessie, who moved into his Florida home twenty years ago to care for him. This was after Marvin had a stroke, and before he came down with cancer and diabetes, and other life debilitating developments. Marvin is, in fact, bed-ridden and out-of-sight throughout the play.

To add that Marvin’s sister Ruth (a marvelously touching Celia Weston), who also lives with him, has medical issues of her own, and that Bessie learns from her doctor in the third or fourth scene that she has leukemia, should begin to suggest that the focus in Marvin’s Room is on dying, and on coping with the inevitability of mortality. Then again, from the opening scene between Bessie and her doctor, the play is inflected throughout with a great deal of humor.

While telling Dr. Wally (Triney Sandoval) that her father and aunt are fine, Bessie adds that Marvin is dying, and “he’s doing it real slow so I don’t miss anything.” And as for Ruth’s “constant pain from her back since she was born,” she’s had “an electronic anesthetizer” installed. “If she uses it in the kitchen our automatic garage door goes up,” explains Bessie, foreshadowing a recurring development in the play which always prompts still more laughter in the house, if consternation to the other characters who inadvertently make it happen, whenever they embrace Ruth or bump into her device. 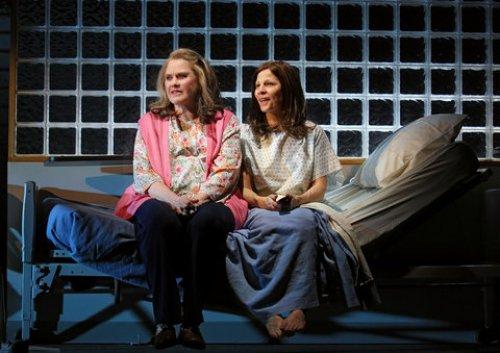 If there’s another continuing motif with Ruth’s beloved afternoon soap opera–details of which we keep hearing about–Marvin’s Room rises above its own TV-script tendencies through the humanity of its characters, and especially Bessie, whose love for all the others imbues them with a newfound compassion for one another. This is especially true of Bessie’s sister, Lee (Janeane Garofalo), who comes all the way from Ohio with her troubled boys, Hank and Charlie, in hopes that one of them will be a match for a marrow transplant for Bessie.

It’s telling that Hank, who’s confined to a “loony bin” when we meet him (“we don’t like to call it the mental institution,” says Lee), wasn’t even aware that he had an aunt. This begins to suggest how estranged his mother and her sister have been from one another, ever since Bessie sacrificed her own life to care for their father.

Having burned down the family’s house, Hank was deemed crazy. But it’s really his mother Lee who’s the impossible one to relate to. Lee herself says that she made the “decision” that she “wasn’t going to waste my life,” twenty years ago, when she walked away after her father had his stroke.

There is a thrilling moment, early in the second act, when Jack DiFalco as Hank begins a quietly paced monologue of such staggering emotional depth that it takes your breath away–and culminates with audience applause. It almost makes you forget how disappointing this current revival of an otherwise moving play is. 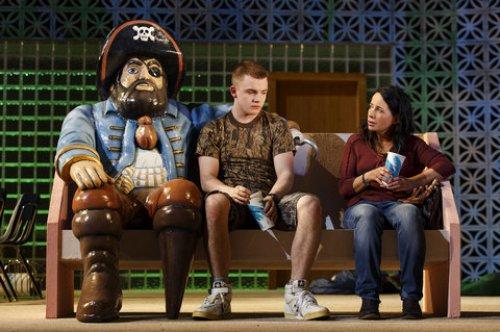 DiFalco, however, is not the only one who commands our attention on the Roundabout Theatre’s large mainstage. But along with seven other cast-members–and no matter how big any of their individual performances may be–they are dwarfed by the space. So is the set (designed by Laura Jellinek), which keeps spinning into different configurations or settings, but in the end, not enough of them.

For instance, one scene begins when Hank appears to return to his aunt’s home in Florida, where he is joined by Bessie (the always reliable Lili Taylor). It takes some time to realize that they’re not supposed to be inside the house–which is where they are clearly situated–rather just outside, or possibly even in the garage. Director Anne Kauffman is to be faulted here, as well, for not always making it clear where we are.

If you saw the original New York production of Marvin’s Room, you may find yourself feeling that the play was more effective when it was presented in the far more intimate environment of Playwrights Horizons. The otherwise fine cast–which also includes Luca Padovan as Charlie and Carmen Lacivita and Nedra McClyde in various roles– simply gets lost in the expansive space of the American Airlines Theatre.