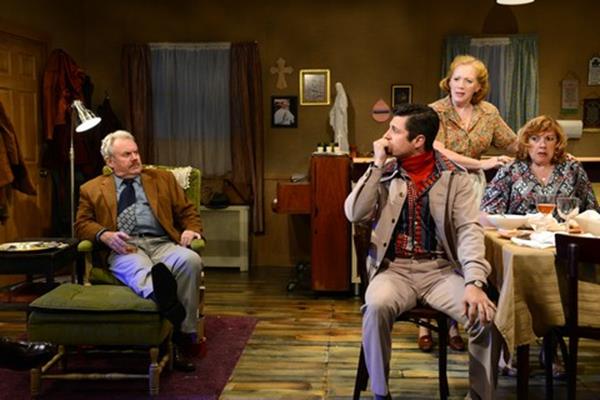 “This house is like a game show. The best liar wins!” roars one of the characters during the climactic family dinner scene in Laura Pedersen’s amiable but underdeveloped Irish-American family conflict play, The Brightness of Heaven.

It takes place in Buffalo in 1974, and set and costume designer Meganne George does an impeccable job of presenting that milieu. The walls of the Kilgannon family’s modest 1950’s style living room and kitchen area are hung with portraits of Jesus Christ, JFK, Pope Paul VI, and there’s also crucifixes, and a small Virgin Mary shrine. The characters wear bell-bottoms, tweed, leather, plaid, a red turtleneck, and loud prints. Newscasts of Watergate news are heard.

After 30 years of teaching music and putting on musicals at St. Aloysius, a Catholic high school, stage-struck, good-natured, Ed Kilgannon is retiring. His stalwart, deeply religious wife Joyce has arranged a family dinner prior to the retirement ceremony. His lively Korean War widow sister, Mary is around to assist. Their various children show up at intervals instigating conflicts and family revelations.

This familiar premise has been explored in many family reunion plays most notably and recently in August: Osage County, and here it is engaging but due to it’s brief length of about an hour, it is ultimately unsatisfying.

“Almost all the families I knew were struggling to find their way forward and make sense of a way of life that was unraveling before their eyes,” writes Ms. Pedersen in her author’s note in the program. She has a laundry list of period-piece social issues that are superficially covered including abortion, pre-marital sex, the economy, interfaith marriage, homosexuality, Watergate, and The Vietnam War.

The writing is often sharp and well observed, with zingers and jokes that effectively register. “If Irish Dementia is only remembering the grudges, than Irish Amnesia is only forgetting the food.” “Excuse me, but is this twentieth century Buffalo or fifteenth century Barcelona?”

“Heat rises and so, scientifically speaking, heaven is actually going to be hotter than hell.” “Forbidden fruits make toxic jams.” One of the biggest laughs comes from, “I keep telling Mary that she needs to get a Crock-Pot.”

The big dinner scene has a rapid-fire tone when a number of bombshells are dropped, some of which are then not further examined. There’s too much going on for a one-act play of this length and it feels rushed and concludes abruptly.

Director Ludovica Villar-Hauser’s skillful staging is evident from scenes where the cast of eight is precisely in motion all at the same time on the small stage. Her work with the actors is excellent. They all seem and interact like real family members. However, everyone’s performances and characterizations would benefit from more fleshed-out material. 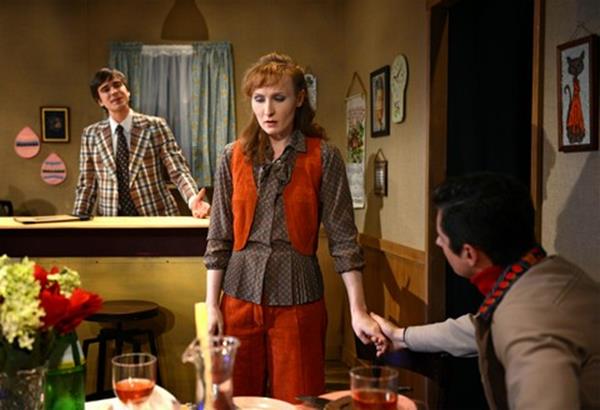 Mark Banik, Kendall Rileigh and James Michael Lambert in a scene from “The Brightness of Heaven” (Photo credit: John Quilty)

Mark Banik, Emily Batsford, Kendall Rileigh, Bill Coyne, and James Michael Lambert play the adult children. All are very good and each has fine comic timing, and they all make the most of their emotional outbursts.

As the jovial patriarch Ed, Peter Cormican is highly personable and gets to display his great vocal talents singing periodically and leading the family’s rendition of “When Irish Eyes Are Smiling.”

Paula Ewin is quite touching and often very humorous as the long-widowed Mary. Whether discussing recipes or weighty matters, she is charming and poignant.

The most forceful performance is from Kate Kearney-Patch as the matriarch Joyce. She juggles her faith, being a wife and mother, family concerns, and her job as a home economics teacher, all with intense focus, conveying tenderness, combativeness and lightheartedness.

While the audience is waiting in the lobby, red-haired, lovely Kendra Jo Brook wonderfully plays Irish music on a violin. She continues performing in the theater before the play begins and then makes the wry pre-show announcements. This is all a marvelously entertaining touch that sets a festive tone.

In this truncated incarnation, The Brightness of Heaven is a worthy addition to theatrical family dramas, but leaves one wishing it were more substantial.

The Brightness of Heaven (through December 14th, 2014)

Cherry Lane Theatre, 38 Commerce Street, off of Seventh Ave. So., in Manhattan