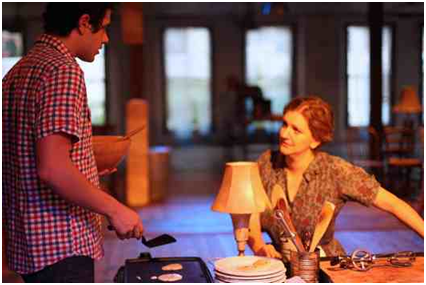 Damon Daunno and Rachel Rusch in a scene from And If You Lose Your Way, or A Food Odyssey (Photo credit: Lauren Rayner)

“The Great Saltine Challenge” is one of numerous food-themed aspects of Lauren Rayner Productions and Mud/Bone Collective’s absorbing and charming interactive production, And If You Lose Your Way, or A Food Odyssey.

This vibrant retelling of Homer’s Odyssey is performed in a wooden floored large loft space in Brooklyn with the audience sitting on a collection of disparate chairs on both sides of the long rectangular playing area. On arrival, everyone is given a wrapped date to eat later when “your stomach rumbles” – which also happens to a character in the show.

The performance begins with the energetic cast of seven walking around introducing themselves and then performing a folksy musical number. We meet the characters of Odysseus, his wife Penelope and their young son Telemachus on their island farm. Odysseus goes off to war and their long dramatic saga begins. 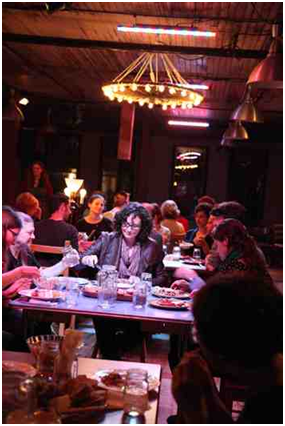 The Feast in And If You Lose Yur Way, or a Food Odyssey (Photo credit: Lauren Rayner)

Writer Lauren Feldman, director Pirronne Yousefzadeh and the ensemble have collaborated in creating this novel piece that is quite exciting, often humorous and at times very moving. Beginning in ancient Greece and concluding in the present, it covers the events of The Odyssey while being preoccupied with food. Throughout, snacks are distributed to the audience, there’s the cracker-eating contest, and afterward everyone gets to sit at tables for a modest delicious vegetarian meal while interacting with each other and the cast.

Bearded Nick Choksi is passionate, soulful and heroic as “Ody” with his mellow countenance. He also wrote the engaging score that the cast performs during the musical interludes. As the staunch matriarch “Pen,” Rachel Rusch is commandingly sympathetic and is a heartfelt anchor of the show. Lively Damon Daunno as their son “Tel,” winningly captures the essence of adolescence. Their great chemistry together brings considerable poignancy to the depiction of this family unit, particularly in the final sequence.

Among bespectacled Josh Sauerman’s multiple roles is that of one of Pen’s suitors where he movingly displays tremendous sadness and emotion. Charismatic Terrell Donnell Sledge appears in various roles and has a standout number performing a song about food. Maha Chehlaoui and Leah Walsh complete the ensemble in realizing the many other characters with their wonderful acting, singing and musical talents.

Homer’s ancient epic narrative poem has been faithfully, lovingly and uniquely realized in this special theatrical event that dramatizes its enduring power in fresh and fulfilling ways.

And If You Lose Your Way, or A Food Odyssey (through June 28th, 2014)
Invisible Dog Art Center, 51 Bergen Street, in Brooklyn
For tickets call, 800-838-3006 or visit http://www.brownpapertickets.com
Running time: two hours includin one intermission